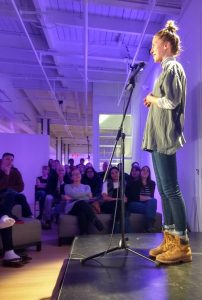 Last November, I had the opportunity to participate in BODIES, a live “science storytelling” event by Broad Science and Confabulation.

I remember the horror of walking on stage, my palms sweating, to greet the audience. “What if I forget my lines?” I wondered. “Why did I ever sign up for this?”

But by the end of my eight-minute story, my clenched teeth had relaxed into a confident smile. I left the venue excited and energized. I was hooked on science storytelling.

It turns out that I’m not alone. Science storytelling has taken off in the last few years, in Canada and internationally. From live storytelling events, like BODIES, to science podcasts, like Quirks and Quarks and Science for the People, countless communicators are using narratives â€“ that is, presenting information as a series of events â€“ to share scientific insights with new audiences. Even better, a growing body of research suggests that science storytelling has powerful benefits for scientists and their audiences.

For scientists, storytelling can be an effective way to bring their research to life and engage audiences outside of their discipline. That’s because narratives transport audiences into a highly absorbed, pleasurable state â€“ one that resembles flow, the so-called “ultimate” psychological experience. Told well, stories can be so engrossing that audiences lose track of time, oblivious to what is happening around them.

But stories aren’t just engaging; they’re also a great way to share information. Psychologists like Arthur Graesser, Brent Olde, and Bianca Klettke have shown that narratives are easier to understand and remember than other forms of communication. Stories, they explain, more closely resemble our daily experiences than explanatory or argumentative-style texts. We think in scenes and episodes, not theses and hypotheses. That means we find it easier to learn from stories too.

“Narratives are intrinsically persuasive,” writes communication scholar Michael Dahlstrom. “In fact, accepted narratives are trusted so much that individuals rarely allow evidence to contradict the narrative; the evidence is altered to fit their narratives.” There’s tons of research backing this up. Stories have been used to shift audiences’ opinions on everything from vaccines to HIV. In a time when almost half of Canadians believe the science behind climate change is unclear, a bit of storytelling could go a long way.

Storytelling is a great way to expand your reach â€“ both within the scientific community and beyond. Image: Pexels, CC0

In addition to benefiting audiences, storytelling also has an upside for scientists professionally. A 2016 study found that journal articles about climate change with more story-like abstracts were cited more often than those without them. Similarly, researchers Benjamin Freeling, ZoÃ« A. Doubleday, and Sean D. Connell found that “writing with the reader in mind” â€“ that is, using creativity, clarity, and a narrative structure â€“ can help boost citation counts.

Finally, evidence suggests that using a bit of storytelling when speaking with the media could help increase scientists’ chances of getting news coverage. Of course, there are tonnes of other factors that journalists consider when deciding whether or not to cover a science story. Are the findings surprising in some way? Is there some mystery, adventure, or controversy involved? But, for many science writers, the presence of a narrative element can be a major factor in deciding whether or not to take on the story.

So what are you waiting for? It’s time to tell your story!