The bushfires in Australia have dominated the news cycle since they started in September 2019. As of January 20th, 2020, over 10 million hectares have burned, killing an estimated one billion animals and about thirty people. Although it may seem bleak at the moment, we have to assume that, eventually, the fires will be put out. But after unimaginable damage and loss of wildlife, what happens next?

Forests bouncing back naturally, as has been typical in the past, would be ideal. Unfortunately, that is less likely now. Canada has seen many fires (and we’re likely to see many more in the future), but we have always managed to minimize damage to the economy and the environment. In 1825, the Miramichi Fire burned somewhere between one and two million hectares in New Brunswick, but within five years the forests had rebounded enough that the lumbering industry was back working as hard as ever. The 1950 Chinchaga Firestorm ravaged 1.4 to 1.7 million hectares of forest in northern British Columbia and Alberta, and released a smoke plume so great it blotted out the sun but saw those woodlands rebound. 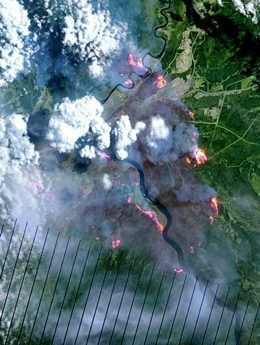 The burn scar left after the Fort McMurray wildfire in 2016. Photo Â© NASA

In fact, fires have been considered healthy for forests: prescribed (or controlled) burning is a conservation method used around the world. This involves forests being intentionally lit on fire to preserve the health of the ecosystem. In these instances, the fires clear out the forest floor debris and return nutrients from the burned debris to the soil, giving juvenile trees more opportunity and room to grow and allowing seeds that need the extreme heat to escape their seed coats to germinate.

So, if forests have dealt with wildfires for thousands of years and not only recovered but been helped by the blazes, what’s different now?

Smokey Bear’s iconic “Remember… Only YOU Can Prevent Forest Fires” no longer seems to be the case as blazes have become more intense and more frequent over the years, in large part due to climate change.

Due to the frequency of burning, the same areas often re-burn before they have a chance to fully recover from the last fire. Usually, for about thirty years after a fire, the forest would be resistant to burning because the forest debris that ‘fuels’ these fires isn’t there. However, higher temperatures and more frequent droughts have decreased that interval in many places, including our boreal forests.

A recent paper by Natural Resources Canada scientists found that re-burned forests are growing back with fewer trees and less vegetation at ground level. It’s feared that soon, the trees won’t be able to recolonize some areas at all.

Besides facing more frequent re-burning, forests must adapt to the changing climate. A paper published by researchers at the University of Montana reported that as the annual climate changes (affecting air temperature, soil moisture, and humidity), seedlings are having a harder time growing. Juvenile trees are more sensitive and vulnerable to the elements than older trees and cannot handle more hostile conditions the way established trees can. However, those older trees are turning to ash when the forests burn. So far, the research is limited to lowland coniferous trees, but the authors suggest that the implications are far more widespread than that. 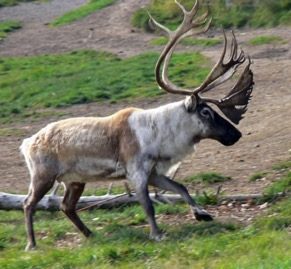 The iconic caribou has featured on the Canadian quarter since 1936. Photo Â© Brad Smith, CC BY-NC 2.0

Needless to say, the loss of forests would be disastrous â€“ not only for us but for wildlife. Our iconic caribou are already suffering from habitat loss, which will only get worse with increasing fires. Countless other species living in our expansive forests will also be lost if their homes go up in smoke with diminishing expectations of forest regrowth.

Koalas were declared functionally extinct by the Australian Koala Foundation because the bushfires destroyed a majority of their habitat. Before the fires, there was a larger number of koalas in Australia than there are caribou in Canada.

What can we do to help? You can donate to the Australian Country Fire Authority to help with the current fires. You can also donate to One Tree Planted, a program that is trying to plant a million trees in BC. Forest Recovery Canada is a great place to get started and find out what you can do in your area to help.