Greenhouse gas-related atmospheric warming has led to an increase in average global temperatures of about 0.85Â°C between 1880 and 2012 (IPCC 2013). This increase is not evenly distributed: the Arctic is warming much faster than the temperate oceans. The most pessimistic predictions suggest that Arctic air temperatures could increase by up by 13Â°C in late fall and 5Â°C in late spring by 2100 (Overland et al. 2014), which would result in catastrophic changes in Arctic ecosystems.

Sea ice is central not only to the Arctic ecosystem, but it also plays an important role in the dynamics of the polar ocean. Arctic sea ice is already disappearing at a rapid rate (about 10% per decade); once ice melts, the harder it is for new ice to form. As air temperatures increase, sea ice will continue to decrease, putting enormous pressure on large mammals like polar bears that rely on the sea ice environment to hunt and thrive. However, it might be equally bad news for smaller animals, such as zooplankton.

‘Zooplankton’ are named after the Greek for ‘drifters’, as they aren’t able to swim against ocean currents. This passive movement means that scientists can follow their distributions to track ocean currents. Zooplankton range from 0.22 mm (tiny ciliates) to a few metres in width (the largest jellyfish). Many Arctic animals, such as crabs, fish, and echinoderms, start off life as zooplankton before they develop their swimming capabilities or settle to the seabed. Copepods, the most abundant multicellular animals in the world (Schminke 2007), spend their entire lives as zooplankton, alongside arrow worms and comb jellies (Figure 1). In the Arctic, copepods of the genus Calanus are the preferred prey for seabirds, fish, and massive baleen whales. They are so in demand because they are loaded with fat stores. 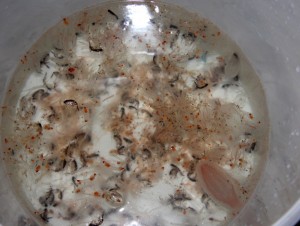 An Arctic zooplankton soup, caught by net sampling, and containing many key species. The long thin white ones are arrow worms, the fatter white and orange ones are sea angels (Clione limacina), the dark ones are amphipods, and a large pink comb jelly is seen at the bottom right of the picture. Hundreds and thousands of copepods make up the small dots throughout the soup. (Photo credit: Malin Daase, used with permission).

Zooplankton are also considered good indicators of climate change because, unlike fish, they have minimal ability to escape from water that’s outside their comfort zone. Since they’re not commercially exploited, changes in their abundance over time are more likely caused by environmental factors. Zooplankton may respond to climate change in various ways that affect individuals, species, communities, and zooplankton predators (Wassmann et al. 2011).

Phenology. The Arctic is a highly seasonal environment, with 24 hours of sunlight for several months and complete darkness for the remainder. This limits algal production to spring and summer in shallow waters, as deep waters are always too dark for algal production. Herbivorous zooplankton species feed intensely off micro-algae during phytoplankton blooms, eating enough to build large fat supplies that will keep them alive during the food-free winter.

Although zooplankton can’t swim against currents, they can migrate up and down in the water column by changing their buoyancy (e.g., Mantel 1983, Visser & JÃ³nasdÃ³ttir 1999). In fall, many Calanus copepods move to depths between 500 to 2000 m, where they spend the winter in wait for the next bloom (Hirche 1991 and others). However, recent evidence suggests that the annual phytoplankton bloom is arriving earlier every year (Leu et al. 2011 and others). If Calanus copepods are not ready to feed on it when it comes â€“ i.e., they’re in the wrong place at the wrong time â€“ they may miss getting the energy boost they need for reproduction. The abundance of the copepod Calanus glacialis in Svalbard waters was considerably lower in 2008 than in 2007, possibly due to adults missing the start of the bloom (Leu et al. 2011). If this trend continues, it could mean big problems not only for the copepods, but for all the animals that depend on them.

Species distributions and community composition. Climate change is also causing shifts in zooplankton species distributions and community composition. The fatty cold-water copepods C. glacialis and C. hyperboreus might decline if the temperature warms by just a couple of degrees (Falk-Petersen et al. 2006). They may be replaced by a smaller more southern species, C. finmarchicus, which contains less lipids. Replacement of these copepods by species that contain fewer lipid reserves could have major effects on the predators that depend on a lipid-rich diet. This in turn may trigger changes throughout the entire ecosystem, including shrinking populations of the little auk, a seabird whose primary food source is larger copepods (Karnovsky et al. 2010, Figure 2). 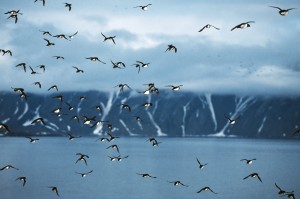 Ocean acidification. The oceans are an enormous sink of carbon; with increasing atmospheric CO2 concentrations they store more carbon and are becoming more acidic (Caldeira & Wickett 2003). The effects of ocean acidification on zooplankton will vary between species. Molluscs, for example, may have difficulties building their shells, and see reduced growth rates. Early stages of copepods have greater mortality rates in more acidic conditions (see review by Fabry et al. 2008). However, copepods that migrate large vertical distances in the water column (e.g., Calanus spp.) are already normally exposed to a wide pH range, and may be less sensitive to a widespread increase in ocean acidity than non-migrating species. (Oithona spp.; Lewis et al. 2013).

Gelatinous zooplankton. Jellyfish abundance in northern seas has increased in recent decades, an trend that is predicted to continue (Figure 3). Major causes include increasing temperatures (e.g., Brodeur et al. 1999, Klein et al. 2014) and human activities that add more nutrients to the oceans, creating good conditions for jellyfish to thrive (Gershwin 2013). Jellyfish are considered “trophic dead ends”, because they use up resources but very few animals eat them (Utne-Palm et al. 2010 and others), so increases in their populations can be particularly unhealthy for ecosystems. On the other hand, recent evidence has also suggested that ocean acidification could have negative impacts on jellyfish development (Klein et al. 2014). 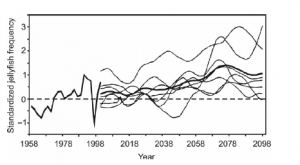 Predicted increases in jellyfish frequency in the North Sea until 2100. The thin lines represent different climate change scenarios and the thick line shows the mean (reproduced from Richardson 2008).

The typical image of the effects of climate change in the Arctic is that of a lone, gaunt polar bear, sitting on an isolated piece of ice. But the polar bear faces not only vanishing sea ice, but also shifting food sources. Climate change affects all the members of an ecosystem, not just the cutest and cuddliest, and without zooplankton, the Arctic ecosystem would collapse. So the next time you see a photograph of a polar bear struggling to survive in a warming climate, remember that the copepods and other zooplankton swimming under the ice are struggling to adapt, too.