Astronomers have discovered the smallest white dwarf yet, and it is helping them to understand the lifecycle of these celestial objects.

White dwarfs are what remain when low-mass stars reach the end of their life. After around 10 billion years of turning hydrogen into helium through nuclear fusion, low-mass stars (such as our Sun) no longer have enough fuel to continue the fusion process. When this happens, the outer gas layer is expelled outward as a planetary nebula. All that remains is the small, dense core of the star, which is called a white dwarf. While white dwarfs are usually around the size of our Earth, this newly discovered white dwarf, named ZTF 1901+1458, has a radius of only 2,100 km, which is just a little bigger than our moon. 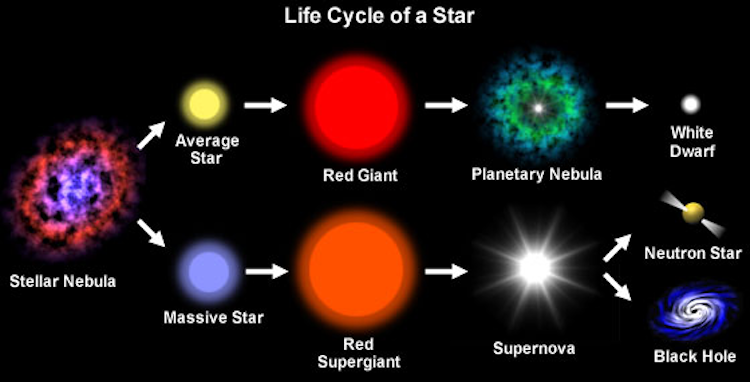 The possible life cycles of a star. A white dwarf (top right) is what remains of a low to medium-mass star when it comes to the end of its life. NASA/CXC/SAO, CC0.

A fascinating property of white dwarfs is that they gain mass as they shrink in size. This means that ZTF 1901+1458 is not only the smallest white yet dwarf discovered but also likely the most massive, at approximately 1.3 times the mass of our Sun. 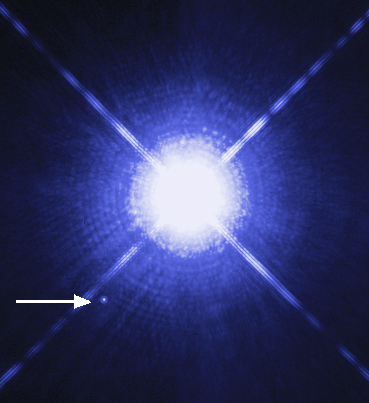 This Hubble Space Telescope image shows the stars Sirius A and Sirius B. Sirius B, a white dwarf star, is indicated by the arrow. This pair of stars is an example of a binary star system. Image by ESA, Public Domain

We usually think of larger objects as being more massive. So why is the opposite true when it comes to white dwarfs? This peculiar property is due to an exotic material within white dwarfs called degenerate electron gas. As the white dwarf gains mass, it must exert more outward pressure to prevent an inward collapse. The white dwarf achieves this pressure by squeezing its electrons closer together, a process that reduces its size. Eventually, if the white dwarf gains enough mass, its electrons cannot be squeezed any closer together. At this point, the outward pressure wins, causing the white dwarf to become unstable and either collapse into an even denser object called a neutron star or explode into a thermonuclear supernova. This critical point is called the Chandrasekhar limit, and it occurs at a mass of about 1.4 times the mass of our Sun.

I spoke with Ilaria Caiazzo, a postdoctoral astrophysicist at the California Institute of Technology, formerly at the University of British Columbia. She is a member of the team that discovered ZTF 1901+1458. Our conversation is based on her paper A moon-sized, highly magnetized and rapidly rotating white dwarf may be heading towards collapse, published by Research Square on November 10, 2020.

Some of Dr. Caiazzo’s answers have been edited for clarity and conciseness.

Why is the discovery of this small white dwarf so exciting? In what ways does it increase our knowledge of white dwarfs?

The rapid rotation and high magnetic field of ZTF 1901+1458 point to the object being born by the coalescence of two white dwarfs. In fact, such short periods are hard to explain with normal stellar evolution, but they are expected after a merger because of the conservation of angular momentum of the parent binary.

Mergers are expected to create white dwarfs with high magnetic fields, because of the dynamo processes that happen during the merger. ZTF 1901+1458 is one of the most magnetic white dwarfs known. So first, we can be very confident that this white dwarf is the product of a merger, which is very exciting.

The extremely high mass of the white dwarf means that this object barely survived the merger. If its mass had been slightly higher, it would have exploded in a supernova type Ia. So with this object, we are truly probing the limit for a massive white dwarf. And at such a high mass, the density in the core is so high that some peculiar physics processes are at work, which we do not observe in less massive white dwarfs. One particular process is inverse beta decay, in which sodium nuclei capture electrons and change into neon nuclei. This process releases neutrinos that quickly escape, contributing to the cooling of the white dwarf.

In your paper, you wrote that the white dwarf was likely the result of a merger. How common are these types of mergers?

Finding the answer to this question is one of the goals of my research project. We have observed white dwarfs in close binaries and we know that they [will] merge because the binary is losing angular momentum due to the emission of gravitational waves. My plan is to find many merger remnants so that I can study them as a population and look for answers to questions such as: How many [white dwarf mergers] are there in the Milky Way? What is the delay between the formation of the white dwarf binary [system] and the merger? What is the merger rate in the Milky Way close to the Chandrasekhar mass? How do such rates compare to the type Ia supernova rate in the Milky Way?

What does the white dwarf’s close proximity to Earth tell us?

A white dwarf can come to the end of its life in two ways – either exploding into a supernova or imploding to become a neutron star. Which scenario do you think is more likely for ZTF 1901+1458? What kind of timeframe can we expect for an explosion or implosion event?

I would like to stress that the white dwarf’s collapse is speculative. It is just a possibility but an intriguing one. Whether or not the white dwarf collapses depends on two competing timescales: sedimentation of heavy elements and core crystallization. If the white dwarf crystallizes (freezes) before enough sodium has been deposited in the core, it will not collapse. We do not have good constraints on either timescale, but they are both of the order of 1â€“200 million years.

If the white dwarf collapses, I think it is more likely to become a neutron star instead of exploding. But we are not sure about this either because it would depend on the dynamics of oxygen burning, which are still not clear.

If the white dwarf implodes into a neutron star, this would introduce a new formation channel for neutron stars. Would you mind expanding on this a bit?

Neutron stars are usually born when a star more massive than about 8â€“10 solar masses explodes in a supernova. Most of the star’s mass is lost in the explosion, while the central core becomes the neutron star. If this white dwarf collapses and becomes a neutron star (and we don’t know that it will), this would be a different way to form neutron stars.

What are the next steps in your research?

I am looking for more objects like this one to build a population of merger remnants to study. I would be very excited to find an even more massive white dwarf!