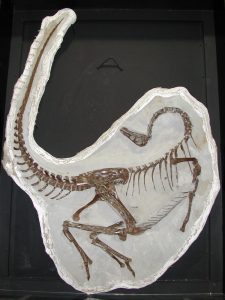 When people think of dinosaur fossils, they often picture dusty skeletons in a museum display, sometimes still partly encased in rock and surrounded by the plaster they were wrapped in when collected in the field. However, dinosaurs were dynamic living organisms in their time and dominated the Earth for over 180 million years. New and exciting discoveries are being made in the field of dinosaur palaeontology all the time, and that includes more than just bones.

With new techniques, new technologies, new applications of older technologies, and sometimes just plain luck, we find things that have never been found before. In 1996, when the first feathered dinosaurs were found in China, it rocked the field of dinosaur palaeontology. Now we have direct evidence that at least 50 species from around the world had feathers.

But feathers are not the only exciting things preserved in dinosaur remains. Recent discoveries include proteins, blood vessels, medullary bone, beaks and bills, and even dinosaur “mummies” â€“ including one spectacular find from Alberta. But our discussion of “mummies” will have to wait until Part 2 of this post (coming on March 30, 2020). First, let’s start with some of the most surprising, albeit smaller and unassuming, recent discoveries.

Proteins, like meat, are organic compounds that are made up of chains of amino acids. Collagen, the main component of connective tissue in the body, is also a protein â€“ it decreases as we age, leading to wrinkles and sagging skin, hence the plethora of anti-aging beauty products on the market that either contain collagen or claim to enhance its production in the skin. Given their fragility, you wouldn’t expect proteins to survive the fossilization process, and yet….

In 2007, 2009, and 2017, Dr. Mary Schweitzer and her team published their work on recovered collagen peptides (short chains of amino acids) from specimens of the thigh bones of both a Tyrannosaurus rex and a duck-billed dinosaur Brachylophosaurus canadensis from the Cretaceous. In 2017, the recovery of collagen from the rib bone of a 195-million-year-old (Early Jurassic) sauropodomorph dinosaur further supported this research. Recovering collagen requires dissolving the bone in acid and then using mass spectrometry and bioinformatic analyses â€“ tools of cell biology rather than palaeontology. Palaeontologists don’t like to destroy their specimens, so that is why it took so long to make this type of discovery.

Along with collagen, Dr. Schweitzer and her team discovered blood vessels from the Tyrannosaurus rex and Brachylophosaurus canadensis specimens, which even contained what look like red blood cells â€“ although in their 2005 publication, they cautiously described them as “small round microstructures”. More research is needed to confirm if these are indeed blood cells, but another research team found similar structures in the bones of eight Cretaceous dinosaurs. The branched structures Dr. Schweitzer and her team found look just like blood vessels of modern organisms, and after preparation they were flexible (they “spring and sproing”, as Dr. Schweitzer has often said in talks on the subject), just like the blood vessels of modern organisms.

That these proteins and blood vessels were preserved at all is almost unfathomable, but Dr. Schweitzer and co-authors hypothesized in a 2014 paper that it is a result of iron. Iron is abundant in the body, particularly in the blood, but it is released after death to form iron nanoparticles and generates free radicals that essentially act like the preservative formaldehyde. Proteins are more robust than DNA, which does not preserve well and is easily contaminated, so no Jurassic Park scenarios of bringing back these extinct creatures. Nonetheless, as the information could provide insight into how dinosaurs evolved, how their muscles and blood vessels worked, and whether they were warm-blooded, cold-blooded, or something else entirely is very exciting. 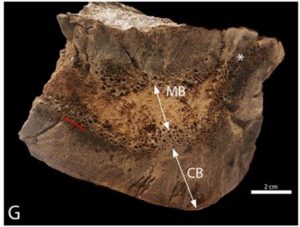 The Tyrannosaurus rex specimen that contained collagen and blood vessels was like the gift that keeps on giving. It also preserved medullary bone. Female birds store this calcium-rich structure on the inside of their leg and other bones and draw on during the breeding season to make eggshells. This is one line of evidence that birds are dinosaurs. It also shows that the Tyrannosaurus rex specimen was female and pregnant, capturing a truly brief snapshot in time and providing one of the only ways of determining the sex of a dinosaur specimen.

Dinosaur mouths came in a variety of shapes and sizes, some with teeth and some without. Even some members of the so-called “meat-eating dinosaurs” were toothless, like the “ostrich mimic” ornithomimids. Dr. Mark Norrell and his team described two specimens with beaks in 2001: one was Gallimimus bullatus from the Gobi Desert of Mongolia, and the other Ornithomimus edmontonicus from Alberta, Canada. The researchers hypothesized that the animals used their beaks for straining food like plants and small invertebrates from water, just like ducks use their comb-like lamellae. 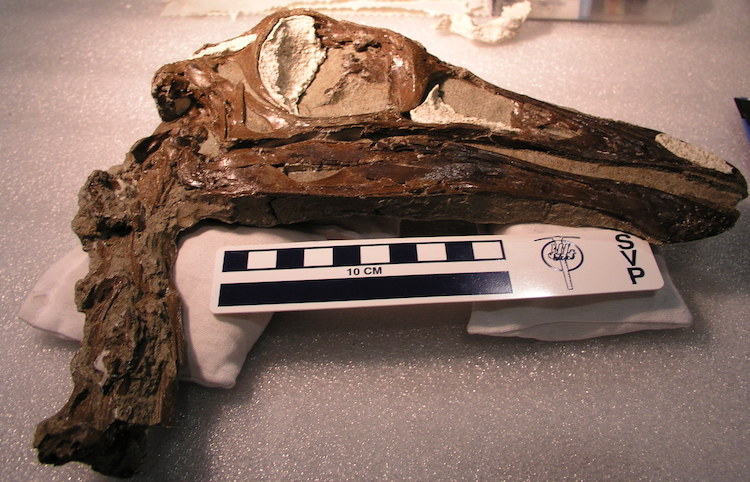 The beak of this specimen is visible at the ends of the upper and lower jaws (Ornithomimus edmontonicus; Royal Tyrrell Museum of Palaeontology (TMP) 95.110.01). Photo credit: Tanya Samman

Hadrosaurs are commonly known as “duck-billed dinosaurs” because the bones of their mouths resemble a duck’s beak. However, it is likely that their mouths were covered in some kind of tough keratinous structure (keratin is the same material that makes up your nails and hair) that doesn’t preserve well. In 1970, William Morris described a rare Edmontosaurus skull with a beak trace (a natural mold that shows what the internal surface of the beak would have looked like) that was anything but duck-like. The specimen (LA County Museum (LACM) 23502) was described by freelance science writer Riley Black as being more “shovel-beaked”. It completely changes what we thought hadrosaur faces looked like!

New views on what dinosaur faces looked like are exciting, but can you imagine what it would be like to find dinosaur remains that preserve the exterior of the animal (e.g., skin, scales, and armour) over large areas of the body? It would almost be like looking at a recently dead carcass of a modern animal, not one that was 10s to 100s of millions of years old and fossilized! Stay tuned for Part 2, where we’ll talk about actual dinosaur “mummies”!