As many of you already know, the Council of Canadian Academies released an assessment last week entitled, “Science Culture: Where Canada Stands.” The report is the result of an in-depth, independent assessment to investigate the state of Canada’s science culture. It was initiated in 2012 at the request of the Canada Science and Technology Museums Corporation, Industry Canada, and Natural Resources Canada.

Their findings show that: 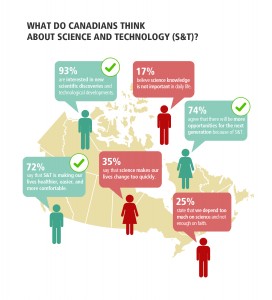 Infographic from the CCA report on Science Culture in Canada.

One of our goals here at Science Borealis is to help our bloggers bring science to the public. Our feeling is that science bloggers are in an ideal position to educate the public, nurture engagement, help foster a positive attitude towards science, and serve as models for young people who are interested in pursuing scientific careers.

In other words, science bloggers have a hand in all four key dimensions covered by the assessment.

The role of bloggers and other media in promoting science are addressed in Chapter 5 of the report: “Informal Science Engagement and Learning in Canada.” I’d like to cover a few of the highlights from that section as they pertain to blogging, social media, and science journalism.

“Survey data show that Canadians engage in and learn about science in many informal contexts. These include traditional channels such as public lectures, television programs, science centres, and museums, as well as online sites and forms of engagement like social media and blogs.” (Sec 5.0, p. 97)

Based on percentage of respondents who engaged in science media and information-seeking at least once in the last 3-months, respondents most commonly watch a science program on television (80%), read a newspaper article (70%), or talk to family and friends (79%). None of that is surprising.

However, what is pleasantly surprising is that 46% of the respondents report that they have read a “blog post or listserv related to science or technology” at least once in the last 3 months. According to the report, the “average” Canadian visits a blog/listserv to gain science information 23.2 times per year.

Data from the Panel’s survey suggest that blogs are becoming a more prominent source of information about science and technology for the general public (Sec 5.3.3, p. 121)

As well, 62% of respondents watched an online science video and 42% heard about a science or tech story via Twitter. This is good news for science bloggers. It means at least some of us are being heard.

Another reason that Science Borealis exists, is to help amplify Canadian voices and Canadian topics. Certainly there are plenty of science blogs in the US and UK that report the same stories our bloggers cover, but those outlets do not provide the unique Canadian perspective we can provide here. This is especially important in light of some of the other data revealed in the CCA report:

Canada has some excellent science reporters, including Hannah Hoag, Margaret Munro, Ivan Semeniuk, Tom Spears, and Mike de Souza, to name just a few. But while we have some long-standing, immensely popular science radio and television programs (Quirks & Quarks and The Nature of the Things being dominant), we notably do not have a nationally distributed English language science magazine for adults beyond Canadian Geographic, which only extends its science coverage to environmental topics (QuÃ©bec Science fills the magazine gap for Francophones).

While a lack of Canadian sources may not result in an overall constraint on the availability of science content due to ready access to periodicals from other countries, it does limit exposure to content targeted at Canadians and about Canadian researchers or institutions (Sec 5.6, p. 140. Bold mine.)

So almost nobody else is writing about science from a uniquely Canadian perspective, and few are showcasing Canadian science and research. As well, few are providing in-depth coverage or news about science topics that can’t be spun into sensational headlines. And finally, the public may not even understand the scientific topics they are hearing about.

Despite Canada’s strong performance internationally, this analysis suggests that over half of Canadians likely lack the level of knowledge of scientific concepts and processes necessary to grasp much of the coverage of science and technology issues in the media. (Sec 4.4.2 P. 81)

All of this creates a huge gap that Canadian science bloggers have the opportunity to fill. We certainly have that potential.

A database compiled by the Canadian Science Writers’ Association, as of March of 2013, lists 143 Canadian science blogs, covering all areas of science and other aspects of science such as science policy and science culture. (Sec 5.3.3, p. 121)

We came up with a similar number when we were developing Science Borealis. As I recall, our count was around 135. In our later follow up however, we found that dozens of those had been abandoned by their authors â€“ perfectly good blogs, many about topics that could use more coverage, sitting idle.

As most of you already know, it takes a great deal of commitment and time to keep up a blog and gain readership. It’s more than just dashing off a few thoughts from time-to-time. It’s writing regularly, researching, administration, technical maintenance, promotion, and relationship-building. It’s like running a business.

And it can’t be done in isolation. Bloggers need support, an audience and a community.

Which is a third reason that Science Borealis exists: To serve as commons where Canadian science bloggers can find and support each other and where the blogging community can be appreciated in its entirety.

As of this writing, Science Borealis has syndicated 88 blogs and the number keeps growing steadily. In the ten months since our launch more than 2600 blog posts have passed through our feed. That’s a lot of bloggers and science writing in one place.

But we’d like to see more. My hope is to hit 100 bloggers by the year-end and to come up with more ways for Science Borealis to support those bloggers and encourage new ones.

For that, we welcome your thoughts. How can we help elevate Canadian science blogs to gain more visibility? What would bring in readers from outside the blogosphere and keep them coming back? How can we, as a community, effectively fill the gaps in science media coverage in Canada? Do you have ideas for other ways in which Science Borealis can facilitate the spread of science from a Canadian perspective?

Let’s have that conversation. You may comment here, blog your own response (let us know and we’ll link to you here), or chat with us via Twitter: @ScienceBorealis or email: ScienceBorealis@gmail.com.

One thought on “Call to Canadian Science Bloggers: Fill the Media Gap”