Ever look at a periodic table and wonder why it looks that way? As a chemist, I admire the order and logic of it every single day. To me, the periodic table is a beautiful compilation of all the elements of the known universe and the rules that govern their atomic behavior. Take a blank periodic table, and point to any square. Just by looking at its location, we know the exact composition, approximate mass, and size of that atom. In fact, for much of the table, we can also predict the number of atoms with which it is capable of bonding. We know all this without knowing the actual identity of the atom occupying that blank space.

I think there are two goals in pure science: to uncover patterns in the natural world and then search for exceptions! Hiding behind the beautiful order of the periodic table is a community of scientists trying to do just that.

Before chemists can find exceptions to the rules of the periodic table, we must first understand them. The table’s rules revolve around the ideal number of electrons for each element. This is defined by quantum mechanics (formally the duet, octet and duodectet rules). To obey these rules and attain the ideal electron count, atoms will either steal electrons from other atoms or share them. Each time two atoms share ownership of a pair of electrons, we count this as one chemical bond. Since we know how many electrons each atom requires, we can predict how many bonds each atom can form. The noble gasses are the only atoms that already possess the ideal number of electrons. This explains why forcing them to bond with other atoms is so difficult, nature simply refuses to let it happen.

Dr. Neil Bartlett’s work with noble gasses produced what is arguably the most impressive redefinition of the rules of the periodic table. Theoretically, the octet rule dictates that stealing electrons from a noble gas is impossible. 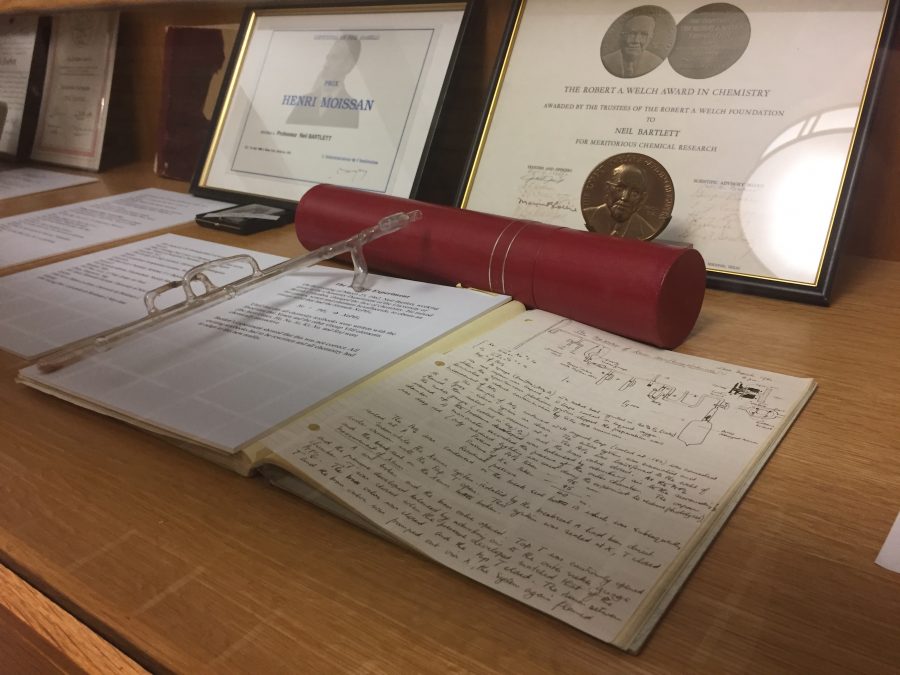 The glassware and lab notebook used by Bartlett during his award-winning experiments. Photo, C. Mustoe

Yet in 1962, while at the University of British Columbia, Bartlett achieved the impossible. He realized that stealing electrons from the noble gas xenon was about as difficult as stealing electrons from gaseous oxygen O2. By replacing oxygen gas with xenon gas in one of his reactions, he created the noble gas compound, xenon hexafluoroplatinate (XePtF6). Although Bartlett was not able to isolate this compound, his reaction was the first evidence that the noble gasses could be forced to bond with others. His work was so groundbreaking that he was honored with a plethora of awards and a shrine in the main hallway in UBC’s Chemistry Department (see photos and check out the XePtF6 graffiti!). 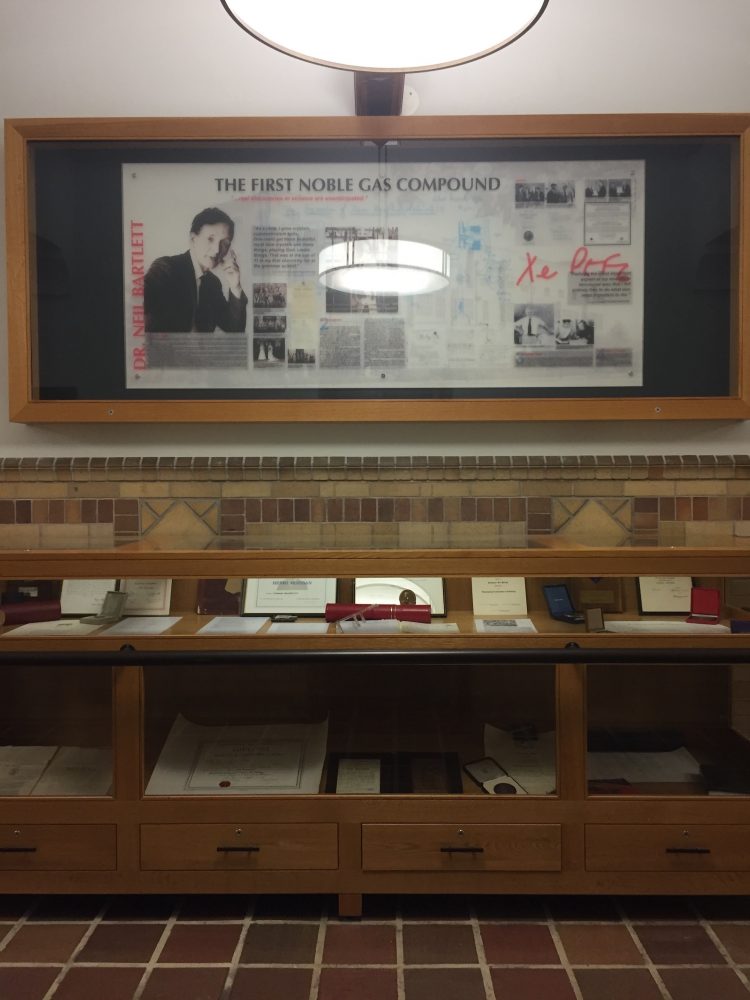 While Bartlett proved that noble gasses are, well, not so noble, there are many other ways to break the duet, octet, and duodectet electron rules of the periodic table. These rule-breakers come in the form of weaker, often short-lived, bonds that occur between atoms that have already achieved the ideal number of electrons.

The most famous of these bonds is the hydrogen bond first described by T.S. Moore and T.F. Winmill in 1912. Hydrogen bonds are to life what butter is to French cuisine. They literally make life possible. They are the reason ice is less dense than water and why lakes freeze from the top down ensuring aquatic life survives the winter. Hydrogen bonds are also the glue holding our DNA together. The inherent weakness in these bonds allows us to pull apart our DNA, copy it and make more cells, more humans, and more life. They also allow for the spontaneous formation of enzymes, the cellular machines responsible for all biological processes. All this is possible because hydrogen can be bound to two atoms at the same time, not just the one dictated by the duet rule.

More recent rule-breaking comes in the form of one of my favourite bonds, the halogen bond, first described in 1978. Halogen bonds occur when atoms in column 17 of the periodic table are bound to two other atoms instead of one (as dictated by the octet rule). Although halogen bonds are not responsible for the procreation of life, they have many applications in chemical self-assembly and drug design. My own Ph.D. research focuses on being able to identify the presence and applications of these bonds. My colleagues and I recently showed that due to this unexpected sharing of electrons, halogen bonds can also be used to make solar cells more efficient by facilitating electron flow (i.e. electricity). One might say that the unusual electron behavior of these bonds is so electrifying, from our first encounter I knew we had chemistry. 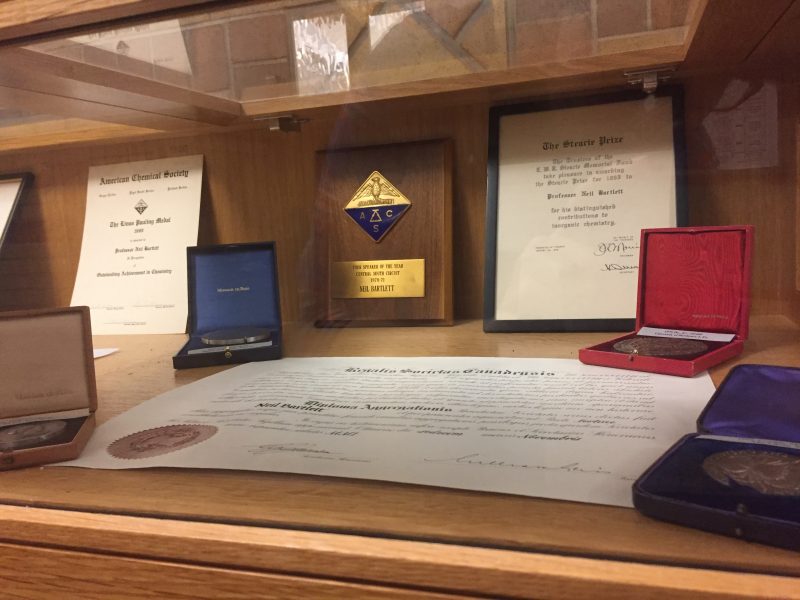 Puns aside, halogen bonds aren’t the only up-and-coming interactions in chemistry. Last June, a Royal Society of Chemistry conference on halogen bonding in Ottawa opened my eyes to the latest group of periodic rule-breakers. Atoms in columns 14, 15, and 16 of the periodic table can also break the octet and duodectet rules. These bonds are analogous to the halogen bond, and while most research on these bonds is still theoretical, it is likely that they will also have many applications.

Despite the varied uses of these rule-breaking bonds, their ability to redefine our understanding of chemistry is what attracts me. I chose to dedicate my research to halogen bonds, not for their potential applications, but because their existence contradicts all rules I had previously learned about chemical bonds. And I am not alone. As scientists, we constantly aim to test the validity of current theories in order to discover new ones. Even something as fundamental as our understanding of atomic bonding is subject to revision. Fundamentally, scientists are explorers on a quest for knowledge, and an essential part of that journey is challenging what we already know.