Picture books about scientists heighten younger readers’ awareness that science is a human endeavour. Picture books not only help young readers develop literacy; they are also an art form all their own. To find out more about this often-overlooked style of science communication, I reached out to Canadian illustrator, author, and animator Kari Rust. She illustrated the picture book Emmy Noether: The Most Important Mathematician You’ve Never Heard Of written by the prolific and award-winning author Helaine Becker.

Rust says illustrated books “are accessible to the youngest members of our society, and the pictures do a lot to draw readers in.” She thinks the illustrations should be “completely tangled up with the text so that one can’t be separated from the other, kind of like sound and picture in a movie.”

Rust has extensive experience in the animation industry, which influences her illustration style. All that practice drawing for animation gives her pictures a beautifully fluid quality. Her animation experience helps her imply movement through poses and compose images with a cinematic eye, enhancing the drama of her illustrations. 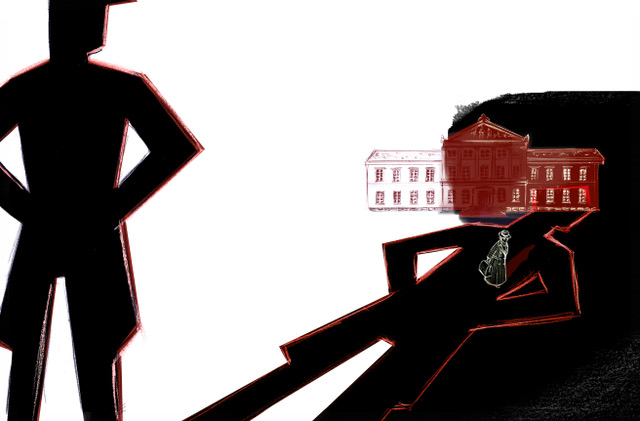 Emmy Noether, a Jewish woman, lived under the shadow of the Nazis in 1930s Germany, which she was forced to flee. Illustration by Kari Rust, used with permission 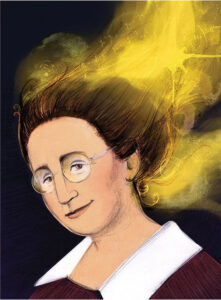 Rust used a glowing aura to indicate the specialness of Emmy Noether in this portrait. Illustration by Kari Rust, used with permission

As the title of the book says, I had never heard of Emmy Noether (pronounced Ner-ter) and neither had Rust before she illustrated the book. Emmy Noether was a brilliant mathematician who helped verify Einstein’s Theory of General Relativity. The book highlights her exceptional mind and kind personality, as well as the discrimination she faced as a Jewish woman in 1930s Germany.

Usually, Rust creates picture books that she both writes and illustrates. In this case, the publisher assigned her a manuscript written by Helaine Becker. Rust says, “a book about math doesn’t sound like it would easily lend itself to illustration, which was one of the reasons this job intrigued me.” The manuscript included some suggestions for illustrations, such as the fictional trio of male professors who acted as hecklers and showing Emmy on a swing at a bowling alley to help show laws of symmetry and conservation. However, while developing the illustrations, Rust only dealt with the Art Director, Marie Bartholomew, and not the author, which is common in picture book production. The illustrations had to help show Emmy Noether’s personality and passion for mathematics, the challenges she faced, and the concepts she worked on. Rust says she “hoped that the illustrations would be entertaining and engaging, but there are also some heavy aspects of the story, like oppression by the Nazi party and Emmy’s early death, that needed a more serious treatment.” 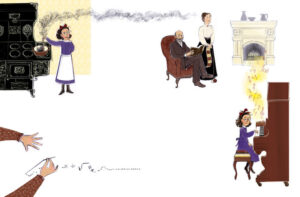 Emmy Noether as an unusual child. Illustration by Kari Rust and used with permission

Becker had conducted substantial research to write the main text and Author Notes, which Rust received. Rust supplemented her understanding of the relevant concepts and history through further research. As an illustrator, she found inspiration in other picture book biographies. She also did a lot of research into what the life and times of Emmy Noether looked like. This research included Nazi uniforms, which Rust says “made me worry about the algorithms associated with my search history!” She even found handwritten notes by Emmy Noether and Albert Einstein, which she copied by hand to include in illustrations.

In high school, Kari enjoyed algebra, saying, “it was like a fun puzzle.” She even considered becoming a math teacher, thanks to a particularly inspiring female math teacher named Mrs. O’Brien. But trigonometry in Grade 12 seemed to be a “sine” that math might not be for her after all. Nonetheless, she says, “an interest in these subjects opens my mind to new ideas, perspectives and ways of paying attention to tiny things and gigantic things.” 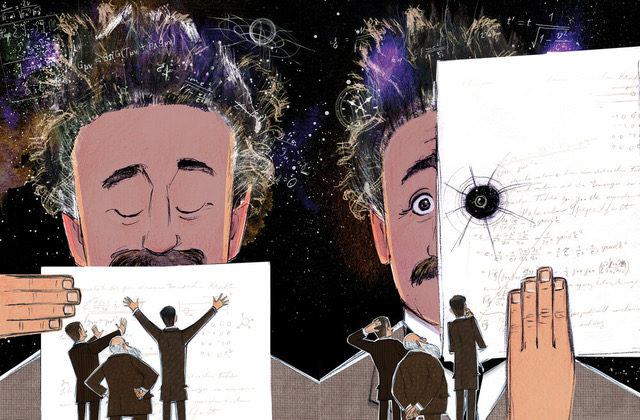 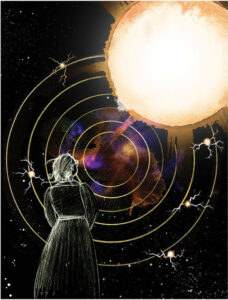 For most of her life, Emmy Noether’s mathematical contributions were not officially acknowledged. Illustration by Kari Rust, used with permission

Because the author packed the manuscript with so many ideas, Rust’s biggest challenge was trying to illustrate all of them. “It was making a bit of a busy mess,” she says. Fortunately, the art director came to her aid. Bartholomew used Rust’s rough drafts to decide what to keep and what to drop.

Rust says, “Picture books offer a wonderful opportunity to reach a young audience and spark interest in science because the marriage of image[s] and information can make the concepts so engaging and real.”

Feature image: Playing chess was one way that Kari Rust suggested the development of the mathematical aptitude of Emmy Noether. Illustration by Kari Rust, used with permission