Elizabeth Arden is an international beauty and cosmetics brand that was founded in 1910. The titular woman wore many hats: successful entrepreneur, businesswoman, public figure, and beauty pioneer. I have another title for her: undercover chemist. She parlayed her interest in burn salves, acquired during her stint at nursing school, into the Elizabeth Arden lotions that are still best-sellers today.

Born Florence Nightingale Graham in 1878 in Woodbridge, Ontario, she was the youngest of five children and grew up in a poor family. She dropped out of high school to work and help support her family. She briefly pursued nursing in Toronto, where she befriended chemists at the hospital lab experimenting with lotions to eliminate skin blemishes. Inspired by the burn salves used to reduce scarring, she left nursing determined to develop a beauty cream.

Graham experimented with various ingredients in a make-shift laboratory in her family’s home. These ingredients were most likely mixtures of petroleum jelly (also known as Vaseline) with fragrant plant oils. She attempted to start her own face cream business, marketing and selling by mail. Unfortunately, her father disliked the powerful odours from her experiments and strongly encouraged her to find work. Families of chemists may relate.

Graham experimented with various ingredients in a make-shift laboratory in her family’s home.

Graham worked odd jobs in Canada before moving to New York City in 1908, hoping to find better opportunities. She was employed briefly as a bookkeeper at the E.R. Squibb Pharmaceuticals Company, but she wanted to work in the laboratories. She learned about skincare at Squibb, but the pharmaceutical chemists weren’t interested in developing beauty products. You might even say that the chemistry just wasn’t right!

After a stint in Eleanor Adair’s beauty treatment parlour, Graham formed a partnership with another beauty culturist, Elizabeth Hubbard. They opened their own beauty shop on Fifth Avenue in 1910, distinguished by its red door. After a falling-out, Graham became the sole owner of the business and renamed it Elizabeth Arden, a name she used herself for the rest of her life. And so, with this new name and the now-iconic red door, Elizabeth Arden was born.

In 1914 Arden collaborated with chemist A. Fabian Swanson, and in 1916 she set up a lab for him in New York City so that he could produce her Venetian Cream Amoretta, and other products in her Ardena line. The velvety, fluffy-textured face cream was in stark contrast to the oily consistency of most lotions at the time. How did they obtain this unique fluffy texture? While the specifics are patented trade secrets, Arden and Swanson most likely varied the preparation and ratios of their ingredients. Face creams made with cocoa butter, coconut oil, almond oil, lanolin (wax grease obtained from sheep), petrolatum (more commonly known as petroleum jelly or Vaseline), Witch Hazel and glycerin were commonly used during the 1910s.

While the specifics are patented trade secrets, Arden and Swanson most likely varied the preparation and ratios of their ingredients.

Arden and Swanson possibly whipped cocoa butter prior to mixing with other ingredients. Another likely change was adding more lanoline to act as an emulsifier. An emulsifier promotes and stabilizes the mixing of water- and oil-based chemicals. Increasing emulsifiers allows more water-based ingredients to be mixed with the oils, reducing greasiness. The innovation didn’t stop there. Arden personally experimented with adding fragrances to her lotions and powders, which was uncommon in the United States at the time. Arden was one of the first ‘beauty mavens’ to hire a chemist and the success of these products led to a long-lasting business relationship between her and Swanson. 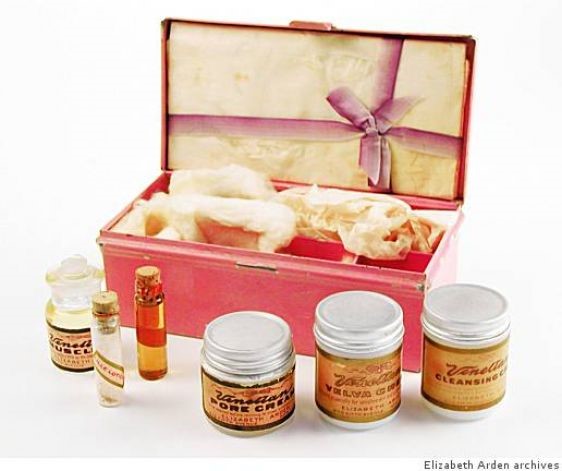 During the early 1900’s, makeup had a negative reputation because theatre performers and sex workers primarily wore it. However, with the advent of close-ups in motion pictures, higher levels of female education, and the suffragette movement, makeup became more broadly accepted. The suffragettes inspired Arden. She not only marched with them but also supplied the red lipstick that symbolized their empowerment.

Arden personally experimented with adding fragrances to her lotions and powders, which was uncommon in the United States at the time.

Arden capitalized on these changing attitudes toward makeup, popularizing cosmetics for everyday use. She marketed eye makeup and matching lip and nail colours as necessities for respectable ‘ladylike’ women. She also pioneered a number of innovations that are taken for granted today. For example, she began the trend of formulating different shades of lipstick and foundation to appeal to a broader audience. The cylinders that her lipsticks came in were specifically designed to fit uniform pockets for American women entering the workforce. Her company was the first to hold in-store makeovers for clients, sell travel-sized beauty products, and train teams of demonstrators.

At the time of Arden’s death on October 18, 1966, aged 87, there were over a hundred Elizabeth Arden Salons worldwide, and her company grossed $60 million per year. Just as impressive in the chemistry realm, she helped create upwards of 300 cosmetics and fragrances! Elizabeth Arden’s innovation and ruthless tenacity is an inspiration for any scientist contemplating a move beyond the confines of academic science.