The Internet has been buzzing for the past few weeks about several major events involving the moon.

Some of my non-astronomy friends were pretty confused after being inundated with conflicting online posts about both a lunar eclipse and a “super moon” happening this weekend. So which one of these two will we see? The answer: both! 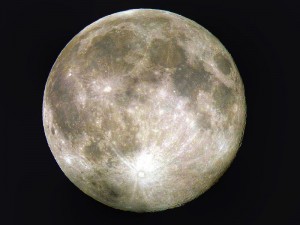 This photo was taken during a supermoon back in 2014. On September 27, there will be a rare combination of both a supermoon and a lunar eclipse visible across Canada. (Photo: Ed Fitzgerald, via WikiMedia Commons).

Lunar eclipse: The moon orbits the earth every ~27 days, which means that it passes behind the earth (relative to the Sun) once a month. This phase of the moon’s orbit is generally referred to as the “full moon” (and is the schedule on which we release our Science Borealis moon-thly newsletter). The earth casts a large shadow in the immediate region of space behind it. A lunar eclipse occurs when a part of the moon passes into the earth’s umbra – or the darkest part of its shadow – at the full moon phase of its orbit.

Super moon: The moon’s orbit isn’t a perfect circle, but rather an ellipse â€“ think of it as a slightly-squashed circle. This means that the distance between the earth and the moon changes over the course of the orbit. There are two periods during the orbit that correspond to the closest and farthest points between the earth and the moon – these are referred to in astronomy as the perigee and apogee of the earth-moon binary system. When the moon is at perigee, it will appear bigger on the sky than it does at any other point in its orbit since it’s as close to the earth as possible. A “super moon” occurs when the moon reaches perigee at the same time when it’s at the full moon phase of its orbit.

Long story short? On September 27, the full moon will be at perigee (point of shortest distance from the earth) and will also undergo a total lunar eclipse! Cool, eh?

This is a fairly rare event, since the timing and alignment of the orbit need to be just right in order for both the total lunar eclipse and the super moon effect to occur at exactly the same time. In fact, the Super Moon Total Lunar Eclipse has only occurred five times during the 20th century. After this weekend’s event, the next Super Moon Total Lunar Eclipse will happen in the year 2033! So be sure to tune in and look up when the time comes. In the meantime, check out this great video by NASA on the upcoming lunar event.