First up, some good news! This week is the debut of Jared Stang as Physics and Astronomy subject co-editor. Jared has just completed his PhD in string theory and theoretical physics at UBC and looks forward to playing a larger role in the national science community. Please give him a warm welcome!

This week your Physics and Astronomy subject editors are reviewing online physics resources, with a focus on gravity. We’ve scoured the internet in search of the interactive tool with the most gravitas and we’ve got four candidates for review.

PhET Interactive Simulations: Gravity and Orbits and My Solar System

Overview: Both web apps simulate the orbits of a collections of solar objects. The first simulation is focussed on modelling the solar system, while the second is a more general multi-body simulation.

Gravity and Orbits (left) and My Solar System (right).

How it works: You choose the system you’d like to simulate, specify their mass and, in My Solar System, their initial locations and velocities, and press play. Then you can play with the parameters: what happens if you double the sun’s mass? Triple the moon’s velocity? Can you turn gravity off and on and not lose the moon forever?

The science: Both simulations are modelling two laws of classical mechanics: the law of universal gravitation, and Newton’s second law. (For this scale of simulations, the adjustments from general relativity are negligible.) Two objects orbiting each other will have simple, elliptical orbits, but systems with more than two bodies orbiting each other become much more complicated. Each object’s motion is dependent on the interaction with two other objects, making the orbit difficult (if not impossible) to analytically calculate. For an arbitrary system, the three-body problem does not have a closed orbit — the objects do not return to their starting location and velocity — and their trajectories must be computed numerically. However, there are known families of analytical solutions for specific systems. The first was found by Euler and Lagrange in the 1700’s, the second in the 1970’s (paywall warning!), the third in 1993, and an astonishing 13 in one swoop in 2013.

Favourite part: The simulations are simple enough that it’s fun to try and draw things by fiddling with the parameters. Stephanne also spent ten minutes trying (unsuccessfully) to crash a comet into the earth. There’ll be no mass extinctions on her watch!

Overview: Build your own (realistic) galaxy! By adding and removing different objects that make up a galaxy, match the characteristics of your galaxy to those observed in real galaxies. 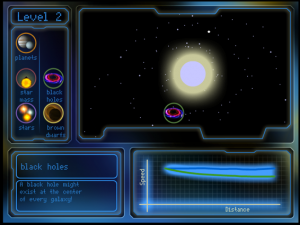 How it works: The goal of the game is to build a galaxy with star rotation speeds that match the observed speeds in a real galaxy. Different components of a galaxy (such as stars, star mass, and black holes) pop up and pan across the screen, and you can add or remove that object from your galaxy.

As you advance levels, more galactic components are available. Only when dark matter is available in the final level can you make a galaxy that has both the star rotation speeds and luminosity of a realistic galaxy.

The science: Astronomers have noticed that the stars orbiting the centres of galaxies are moving too fast for the gravity of the luminous part of the galaxy to hold them. Naively, these stars should fly away into space. Dark matter, which can’t be seen by our telescopes, provides the extra gravity needed to keep these fast moving stars in orbit. (See this primer on dark matter from Perimeter Institute.)

Favourite part: The epic background music â€“ it really feels like you’re floating in space above a galaxy.

Pro tip: The accompanying worksheets and teaching suggestions provide good support in using this game as an educational tool.

Overall score: 3 out of 4 neutron stars. A little more structure in the game could make this a more interesting experience.

Overview: The most fun you can have with black holes without solving Einstein’s equations! 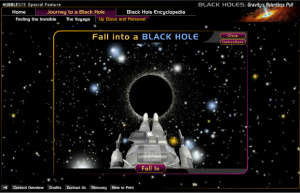 How it works: This simluation has three stages: Finding the Invisible, The Voyage, and Up Close and Personal. First, you have a telescope, and you’re looking for a black hole in the sky. Then, you get to travel to the black hole you found by launching your futuristic spacecraft. Finally, the third stage is a launching pad into the interactive in-app “Black Hole Encyclopedia”, providing links to virtual experiments you can do, such as what would happen if you fell into a black hole. The experience is a blend between a game and an interactive multimedia app, with lots of click-based exploring to be done.

The science: The focus of this tool is on black holes, but there are many different topics touched on throughout the journey. From the different wavelengths astronomers use to observe heavenly objects (x-rays, visible light, and radio waves) to a description of how black holes are created, this app has a wealth of scientific information. Keep your eyes peeled for a cameo from Einstein’s special relativity, used to determine the energy needed and length of time for intergalactic travels.

Favourite part: While there are many very cool features, the simulated view from orbit around a black hole was a highlight. It’s mesmerizing to watch the stars in the background as they move across the screen and their images are distorted by the black hole in the foreground.

Pro tip: In The Voyage, you need a lot of energy to get anywhere in space. The distances are long. Very long. (See for example The Scale of the Universe.)

Overall score: 4 out of 4 neutron stars. The story of the journey to a black hole makes this web app very interesting, and the wealth of information provided make it a useful learning tool.

In conclusion: if you’re looking to while away a few moments at your desk with classical mechanics, try My Solar System. If you’ve got a bit more time and want to play with some basic galactic physics, try the Mystery of Dark Matter. But if you’re looking for something that really digs into a lot of complicated science in an engaging, entertaining way, our top pick is HubbleSite’s Gravity’s Relentless Pull.

Here are some notable posts from the physics and astronomy feed, and some physics in the news. If you know of a Canadian physics blog that’s not on Science Borealis, please let us know!