Octopus gyotaku by Paula Nishikawara used with permission of the artist.

Give someone a fish and feed them for a day. Teach them how to fish print and intrigue them for a lifetime.

Gyotaku is a Japanese word from gyo meaning “fish” and taku meaning “rubbing.” Make sure to pronounce gyotaku with a hard “g” to avoid any misunderstandings because in Japanese “jo” could mean “female.” Gyotaku may not yet be as well known as some other Japanese terms such as sushi, manga, or karaoke, but like these, it is slowly becoming an international cultural export.

The exact origin of gyotaku in the piscivorous nation of Japan is almost as murky as a koi pond. In a talk from 2011 at the Beaty Biodiversity Museum at the University of British Columbia, gyotaku evangelist Mineo Yamamoto claims it arose in the mid-1800s in northern Japan as means to prove the size of catches in a fishing contest, and was supposedly done using live fish. According to him, the oldest remaining example of gyotaku is a print of a carp from 1857 at the Honma Museum of Art in Yamagata. The museum itself is the former residence of a Lord Sakai, who had been one of the wealthiest landowners in Japan. Other sources also mentioned this museum, but the collections database on the museum’s website did not seem to include any gyotaku at the time of my search. Another article says the print is at the Tsuruoka library but their website is in Japanese and I couldn’t find the print online. Some versions of the story suggest an unnamed emperor devised the first fish print. This seems less likely, although more recently, Emperor Emeritus, Akihito, a practising ichthylogist with a species of goby named after him, is credited with discovering several new species of goby himself, though nothing about printing them was mentioned. While the origins of gyotaku may sound a bit fishy, the spread to the West began in 1955, following the creation of the Association for Gyotaku to promote the practice. Dr. Yoshio Hiyama, author of a book on gyotaku, did demonstrations in New York at The Museum of Natural History as part of a gyotaku exhibit.

Since then, it has been embraced as an art form, a potential source of biodiversity data, and an educational activity merging art and science.

The two main “schools” of fish printing are direct and indirect. The direct method seems to be more common and involves applying ink or paint to the fish. Paper or fabric is then placed over the surface to make a print. Originally, this was done with black sumi ink on washi paper, but since the 1940s or so, some artists began experimenting with colour. Eiji Umemura, whose artwork is featured in the banner image, is another gyotaku artist in Canada. He was born and raised in Japan, then moved to Quadra Island in British Columbia because of the fishing. He uses a direct method, but also adds meticulous details of colour and pattern later. He uses non-toxic paints so he or his clients can still enjoy eating the fish afterward. Rachel Reeve does gyotaku on the east coast with mixed media. Vancouver-based artist Paula Nishikawara, seen below demonstrating the direct method at a workshop in Berlin, says, “Since the image is coming directly off the fish, it feels as if part of the fish will always remain in the art work.”

In the indirect method, thin paper or textile is attached to the fish with water or glue. Paint or ink are then patted on top with a silk-covered cotton ball, so that the pigment does not contact the specimen directly. Mineo Yamamoto is an advocate of this method.

Above, a student uses the indirect method at Yamamoto’s studio. Yamamoto says that this allows for finer details of the fish to be captured. Using this indirect method, he has made prints of rare and unusual specimens, including that of a 6-metre long squid. Positioning specimens and adding colour can result in enhanced understanding of preserved specimens.

Unlike fish stories, original gyotaku (rather than digital copies on a blog) preserve the size of the original fish. Gyotaku can record enough information about size and morphology to be used as a source of data for studies on historical biodiversity, if you have enough of them. They might even contain trace amounts of DNA. Japanese ichthyologists Yusuke Miyazake and Atsunobu Mirase conducted a survey of Japanese leisure fishing shops in search of gyotaku specimens in areas where species are known to be threatened or to have gone extinct. I remember seeing such prints when I lived in Japan studying marine biology, but I did not really appreciate what they were for. These scientists analyzed over 200 examples, all created through the direct method. It gave them a sampling of the catches in these areas, possibly including some of the rare species. They were able to set up a database of gyotaku (in Japanese) to build on for future studies. 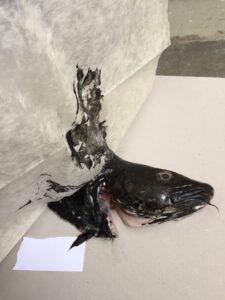 Print off a cod in Iceland by Amy Suzuki with permission of the author.

As intriguing as the results can be, the creation of gyotaku has the greatest potential to change perceptions, not only for beginners, but also for established artists approaching with related skills. Toronto-based printmaker Amy Suzuki usually works with lithographs of natural settings. While on an artist residency in Iceland of all places, she decided to try her hand at gyotaku. Her residency took place in a port town in Iceland with an important cod industry. A worker at a local fish processing plant gave her a specimen for free and was intrigued to see the results.

Paula Nishikawara has been doing gyotaku as part of her artistic practise and as a workshop leader for 40 years. She notes that in the act of doing gyotaku, “One traces the exact outline, feels the scales, the slime, smells the smell, sees the condition, notices the placements of the fins and the shape of the tail.” She also suggests the “inquiry, awareness, and emotional connection” a participant experiences in doing gyotaku can build a deeper appreciation for fish and stronger sensitivity to environmental issues in general.

For young beginners, the Acorn Naturalists website points out, “in addition to being fun, fish printing is a perfect way to combine science, art, mathematics, reading, and writing.”

Lisa Tautz, a former School Programs Coordinator at the Vancouver Aquarium, recalls participants in a sleepover program using rubber moulds of fish and fabric paint to print them onto pillow cases and the “genuine moment of delight and surprise when the kids lifted the first print off”. Workshops can be engaging for people of a range of ages and aptitudes.

After reading about gyotaku, I decided to try my hand at it. I happened to have some Chinese ink sitting around and some tissue paper used as gift wrap. But I didn’t have a fish handy, so I tried a dandelion leaf, which ended up looking a bit like a fish.

Then I found out that this approach is part of the broader term of nature printing. But that’s a whole other kettle of fish. 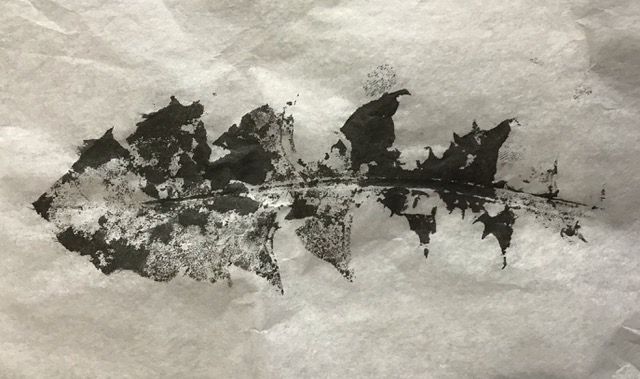 Dandelion leaf by Raymond Nakamura. Used with permission of the artist.

Feature image: Chinook 24 lbs, by Eiji Umemura, used with permission of the artist.