The year 2021 was one of British Columbia’s biggest wildfire seasons in our lifetimes. Between April and September of that year, the province saw about 1,600 wildfires that burned approximately 8,700 square kilometres. Although the wildfires occurred in BC, the smoke from the wildfires spread throughout the country, reaching Yukon, the Northwest Territories, and even as far as Nova Scotia. While some people think that flames are the most dangerous aspect of wildfires, health experts argue that it’s the smoke people should be more worried about. Between 2013 and 2018, the Canadian government attributed approximately 620 to 2,700 premature deaths to wildfire smoke exposure. Moreover, recent studies are suggesting that wildfire smoke may lead to a higher risk of brain tumours and DNA damage, in addition to worsening existing lung and heart problems. 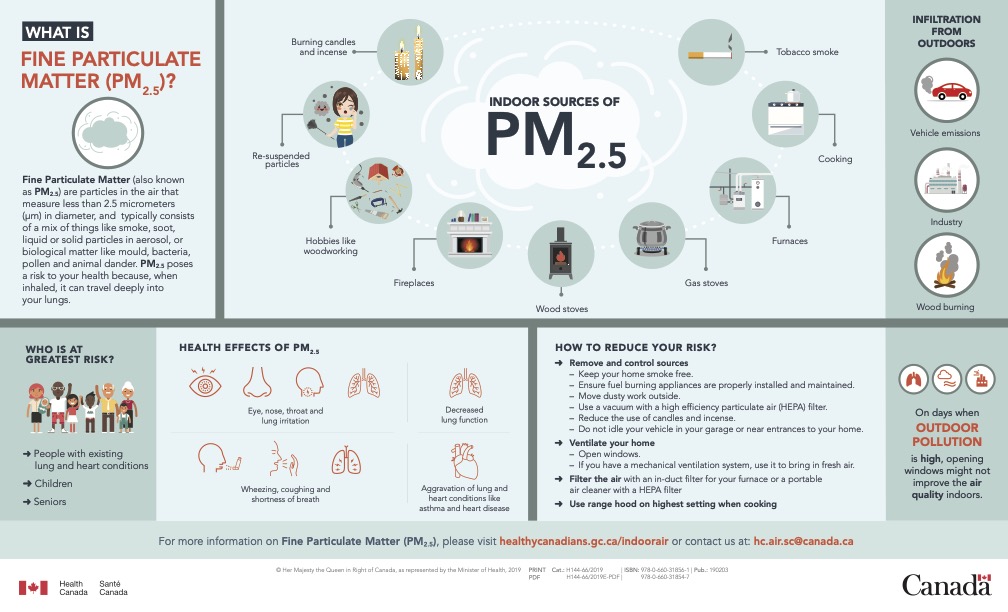 Wildfire smoke is so dangerous because, in addition to containing hazardous gases, it also contains fine particulate matter, which can be inhaled and easily enter the lungs. Image: © All rights reserved. What is fine particulate matter (PM2.5) Health Canada, modified 2021. Adapted and reproduced with permission from the Minister of Health, 2022.

The components of wildfire smoke depend on multiple factors, including what’s being burnt, the temperature of the fire, and how far the smoke travels. As a result, researchers can’t easily generalize about the exact composition of wildfire smoke. Nevertheless, research has shown that it is generally a complex mixture of hazardous compounds—such as carbon monoxide, nitrogen oxides, and polycyclic aromatic hydrocarbons—that have been linked to increased rates of cancer. The main component of wildfire smoke, PM2.5, can easily enter the lungs and blood stream, causing a wide range of serious health problems.

What do we know about the impacts of wildfire smoke on our health?

While it’s normal for people to breathe in particulate matter, wildfire smoke is harmful because wildfires produce a high concentration of PM2.5 and hazardous gases that can remain in the air for weeks or months. In the short-term, wildfire smoke can irritate the eyes and lungs. However, long-term exposure to wildfire smoke can lead to a higher risk of lung damage, heart problems, and strokes. Researchers established the connection between air pollution and lung problems in the 1950s and 60s. By the 1990s and 2000s, research on firefighters had shown that wildfire smoke can lead to changes in the concentration of red blood cells and immune cells. Once the particulate matter enters the lungs, it triggers a complex biological reaction that can cause these serious health problems. Although researchers don’t fully understand how this happens, recent studies suggest that long-term inflammation and DNA damage may be involved.

Generally, when particulate matter is inhaled and lodges in the lungs, the immune system reacts as if it were a threatening microbe. Consequently, the body sends macrophages (white blood cells that break down viruses and bacteria) to break down the particulates. However, since the particulates cannot be broken down, the macrophages engulf them and eventually die. Over time, this may lead to a weakened immune system and long-term inflammation that shares some similarities with the inflammation caused by chronic stress.

Until recently, no studies had definitively shown which areas in DNA are altered by wildfire smoke and whether these changes persisted. Just last year, researchers found that infant rhesus monkeys exposed to the 2008 California wildfire season, which saw 6,255 different wildfires in the state alone, had altered genes compared to those born after the wildfire season. Specifically, the monkeys exposed to the wildfires showed changes in genes involved with the immune response and brain development. Although it is unknown whether the same changes occur in humans, this study adds to the growing number linking wildfire smoke exposure to genetic changes.

How can we protect ourselves from wildfire smoke?

As wildfires become more severe, it is important to keep ourselves safe and avoid exposure to wildfire smoke. There are many actions Canadians can take to protect themselves. The first is to frequently check local news outlets and emergency officials online for wildfire alerts. The Canadian Wildland Fire Information System (CWFIS) has an interactive map that shows the risk of wildfires in every Canadian province and provides daily fire weather and behaviour reports all year round. Installing an Association of Appliance Home Manufacturers (AHAM) certified air purifier, closing the windows, and using a well-fitted respirator, such as an N95, can further help limit exposure to wildfire smoke. However, it is important to note that even though respirators help filter out PM2.5, they don’t filter out the harmful gases produced by wildfires. More safety information can be found at the Canadian Red Cross and your province’s or territory’s local wildfire management agency. 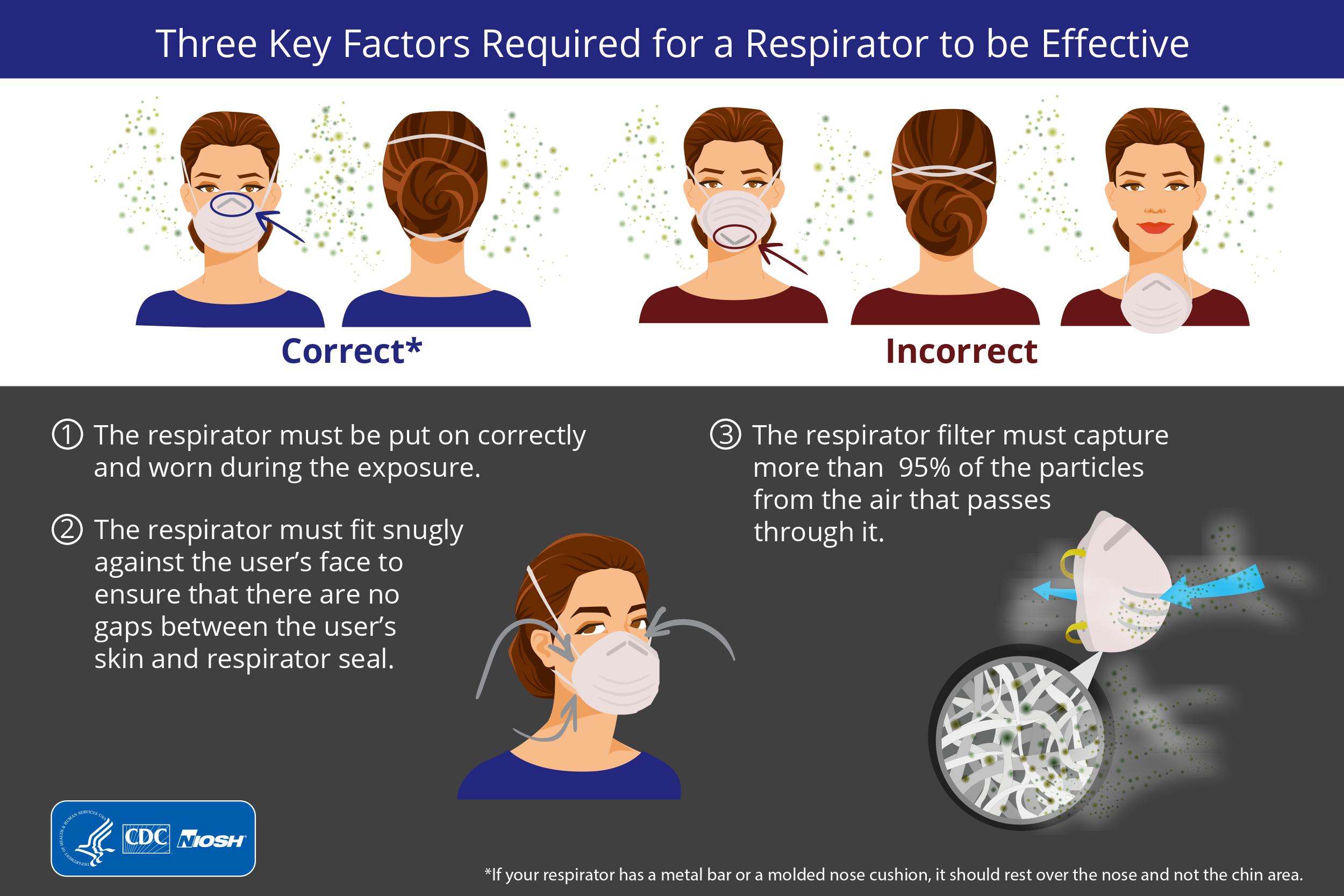 One of the best ways to protect yourself from wildfire smoke exposure is to wear a well-fitted respirator, such as the N95 or KN95. Image: National Institute for Occupational Safety and Health, Public Domain.

If current trends continue, wildfires in Canada will become more severe in the coming years. In May this year, the Canadian government committed $516 million to train 1,000 additional firemen, to develop more accurate wildfire monitoring systems, and buy additional firefighting equipment to prepare for future wildfires. It remains very important to understand the dangers of wildfire smoke so we can protect ourselves and our loved ones better.

One thought on “How does wildfire smoke affect our health?”