It’s been an animal house on the Health, Medicine and Veterinary Science blog feed lately, with posts from several bloggers highlighting new science about some of our favourite creatures. And learning about mice, dogs, frogs, chickens and horses has taught us a few things about ourselves, too.

Over at Something About Science, we learn that frog tongues look promising for gift-wrap, with a new study revealing that they work similarly to Scotch tape.

On BiologyBizarre, Meredith Hanel probes the science of pandiculation, which is when animals stretch and stiffen their bodies, often while yawning. Tiny chipmunks, humans, and dogs do it instinctively when they wake up or get sleepy, and research has taught us a few of the reasons why. It’s a survival instinct that feels good because it helps our bodies stay balanced. This stretching could also help keep muscles limber with strong connections to the nervous system, while yawning helps with alertness. 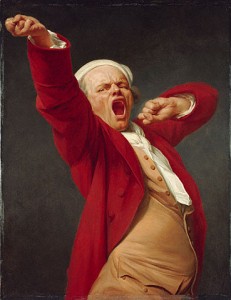 Humans share some instincts with other animals, but we can also change animals that spend a great deal of time with us. Lynn Kimlicka at Something About Science illustrated new research that found chickens who aren’t afraid of humans grow bigger. Chickens selected over several generations for their boldness grew bigger and faster than their scaredy-chicken counterparts, and laid bigger eggs. Another recent illustration from Lynn summarizes research that domestic dogs tasked with a puzzle box were more likely to give up and turn to their human friends for help than their wild relatives, wolves. The wolves were more dogged (see what we did there?) in their efforts, and more likely to succeed.

A post about the fox (another dog relative), by Zazie Todd at Companion Animal Psychology, shows that vegans and fox hunters have more in common than it seems. Both groups use pronouns to refer to foxes, calling them “he” or “she,” not “it.” They use them differently, but both groups say their language choice shows how much they respect the animal.

Meanwhile, the Science of Eating Disorders blog notes that it’s not what we can do for animals, but what they can do for us. A recent post explores new evidence about equine-assisted psychotherapy as an alternative or complement treatment for eating disorders. This type of therapy involves activities with horses and a therapist, such as breathing exercises, intended to help patients emotionally. The author, Andrea, says the research has some fascinating conclusions but the treatment needs more evidence to support it.

Finally, Science Borealis bloggers Meredith Hanel and Lisa Willemse discuss two different approaches to understanding Rett Syndrome. Rett syndrome is a rare genetic disease which affects brain development and is mostly common in females. On The Expression, Lisa Willemse talks about how a researcher in the Sick Kids Hospital in Toronto is using an unlikely organism, the blood-loving protozoan parasite Trypanosoma cruzi, to help learn more about Rett Syndrome. On BiologyBizarre, Meredith Hanel discusses an experiment that helps improve mice with Rett Syndrome.