The production of electronic equipment is growing 3â€“5% per year. At the same time, the effective lifespan of those electronics being substantially reduced as technological advances, aesthetic preferences, marketing and compatibility issues lead consumers to replace them long before their useful life is over. The United Nations Environment Program (UNEP) estimates that in 2017, 50 million tonnes of electronic waste (e-waste) will be dumped globally, up from approximately 1.8 million metric tonnes in 2014. 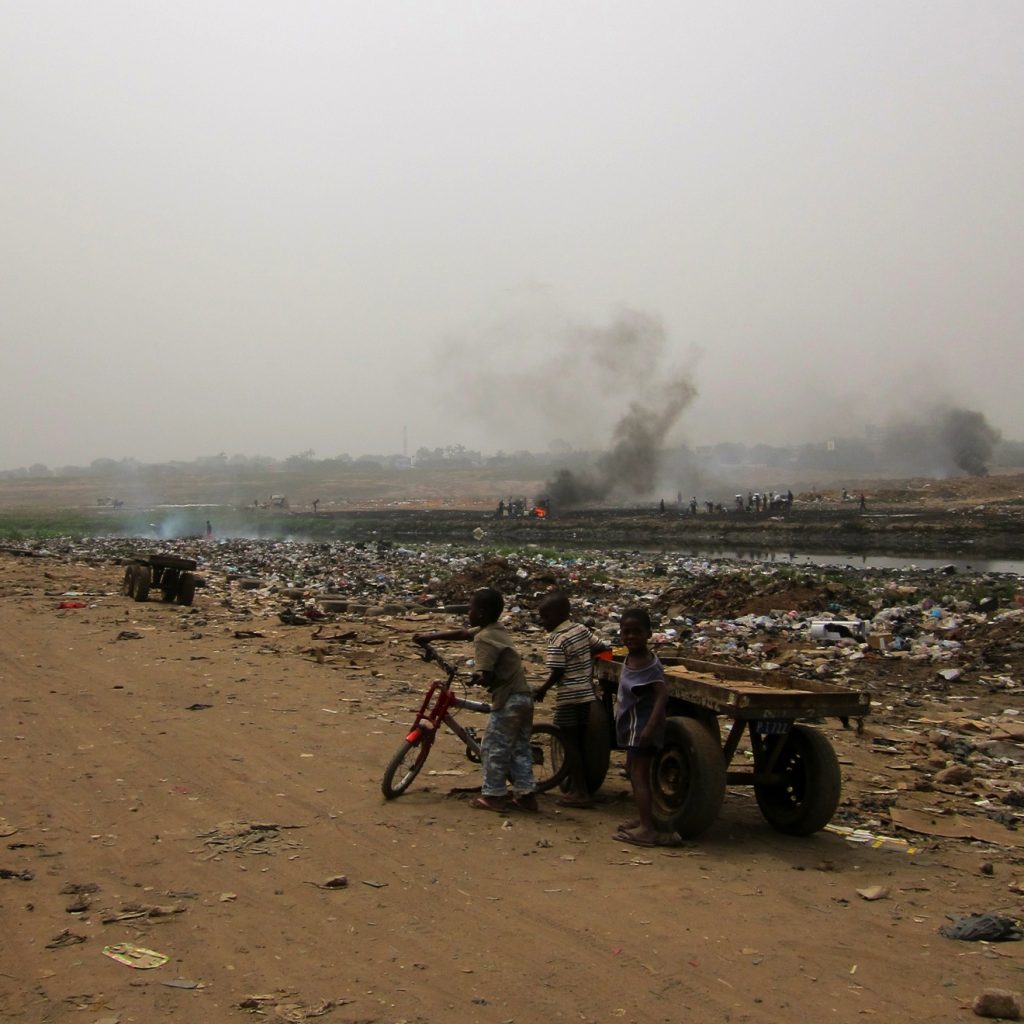 Pollution from the e-waste industry at Agbogbloshie, a former wetland in Accra, Ghana, and one of the largest e-waste dumps in the world. Credit: User Lantus (CC by 2.0)

E-waste is quickly becoming one of the most significant pollution problems worldwide – associated with over 1,000 toxic substances, including those found in LEDs (light-emitting diodes). But it’s unlikely that the waste estimates noted earlier even include LEDs because of their newness in the marketplace and because many nations have not officially defined LEDs as electronic waste (despite that they contain comparable amounts of hazardous elements to cell phones).

LED lamps, the most efficient “light bulbs” available on the market, are made of semiconductors. This means that, like your cell phone, they contain heavy metals that can leach into the soil and water, thereby entering the food chain and impacting ecological and human health. When electronics are incinerated, hazardous substances are released in the air and soil. This impacts air quality and further threatens soil and water quality as the residues are landfilled for final disposal.

In its report The Low Carbon Economy, Goldman Sachs predicted that by the end of 2015, almost 3 billion LED lamps (bulbs) would be sold globally, comprising 28% of the global lighting market. It estimated that by 2020, LEDs will dominate the market, and by 2025, 9 out of 10 light bulbs in use will be LEDs. 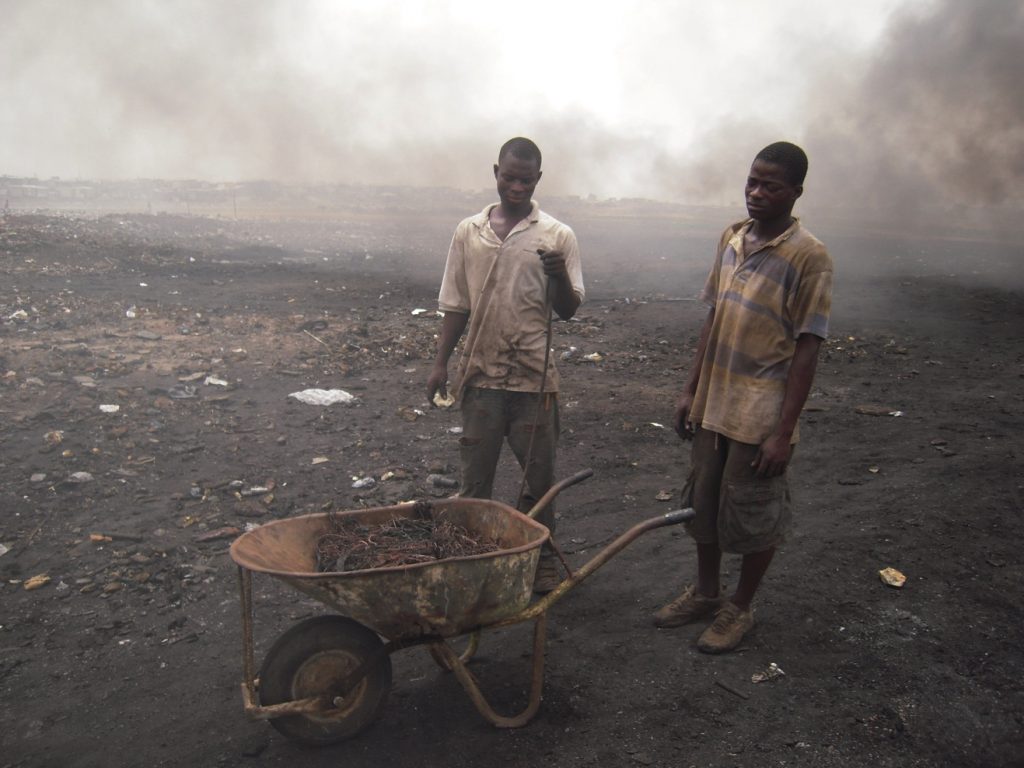 Aluminum, copper, gold, gallium, and other metals are used in LED production. At the current rate of gallium and indium use, the global supply of both elements will be exhausted within 20 years. Likewise, twenty-six percent of the estimated global stock of copper is already in permanent use or consigned to waste. These elements, along with others used in LED manufacturing, can be recycled, extending their availability for the production of electronics well into the future.

With LED lifespans of 25,000 hours or more, many people, including some regulators, are not yet considering the future impact of LEDs on the waste stream. However, this estimated lifespan of LEDs is based on ideal conditions and the assumption that the bulbs will stay in use until they fail. But not all LEDs purchased now will still be in use in 20 years.

At the current rate of gallium and indium use, the global supply of both elements will be exhausted within 20 years.

A report resulting from the 13th Global Conference on Sustainable Manufacturing showed that LED lifespans were reduced, sometimes significantly, by consumers’ switching frequency (the number of times one turns a light off and on). This behavior imposes performance limitations not often accounted for in the estimated lifespans of LEDs.

Technological advances in LED development may also lead to early bulb replacement by consumers. The US Energy Information Administration (EIA) estimates that by 2020, LEDs will nearly double in efficiency, while halving in price. That means consumers will be able to purchase bulbs for less money that also save them more in energy costs.

A selection of consumer LED bulbs available in 2012, many of which are already obsolete only 4 years later. Credit: Geoffrey Landis (CC by 3.0)

Better color rendition, smoother dimming, and longer lifetimes are some of the enhancements LED manufacturers are promising in new bulbs. With lower cost and ever-evolving features, it’s conceivable that consumers will soon approach purchasing bulbs in the same way they do other electronic gadgets – replacing them long before their useful lives expire in exchange for increased features, quality, efficiency or style.

How many people still use a cell phone purchased ten years ago? What about 20, 25, or even 32 years ago? That’s how long some of these LED bulbs are predicted to last, though it’s hard to believe consumers will resist the temptation to replace their older bulbs with better models long before they dim. And this is part of the LED conundrum.

…it’s conceivable that consumers will soon approach purchasing bulbs in the same way they do other electronic gadgets – replacing them long before their useful lives expire in exchange for increased features, quality, efficiency or style.

LEDs contain more metals than incandescent bulbs, which means that two of their three life stages (manufacturing, in use, and end of life/disposal) have more potential to cause resource depletion and negatively impact the environment than incandescent bulbs. What makes the LED most environmentally friendly is its long, energy-saving lifespan: its manufacturing and end of life impacts are stretched out over decades rather than a few years.

A study published in Environmental Science & Technology assessing the potential environmental impacts from the metals in incandescent, compact fluorescent lamp, and light-emitting diode bulbs found that, based on their metal content, LEDs, even when their long lives are taken into account, have 2â€“3 times the resource depletion and toxicity potentials of incandescent bulbs primarily due to their utilization of aluminum, copper, gold, lead, silver and zinc. So, in order for those LEDs to be as environmentally friendly as we’re told, we must keep them operating for their full lives.

In order to reduce the environmental and human health impacts of LED disposal, especially considering the likelihood of consumer ‘early bulb replacement,’ all regulators – not just the current handful – should be considering implementing LED collection and recycling programs now.