Statistics haven’t had it easy ever since Mark Twain’s famous “lies, damned lies and statistics.” But as mathematician Frederick Mosteller would have replied, “while it is easy to lie with statistics, it is even easier to lie without them.” On that note, enjoy my three picks for this week from the Math & Stats category of Science Borealis.

A toast to mathematics

Over at Mr Epidemiology, Atif Kukaswadia tells the story of William Sealy Gosset, a mathematician who worked for the Guiness brewery in the late 1800s. He was looking for barley varieties that would give the best yields, and what growing conditions they required. Although our more mathematically-inclined readers will recognize Gosset as the inventor of the Student’s T-statistic, the circumstances behind the discovery – and the reason for the test being called Student – make for a fascinating read.

Shining light on the dangers of cell phone radiation

Simon Goring at Down With Time shows us an automated approach to generating custom maps using the statistical language R, a few custom R packages from other sources, and the Natural Earth data sets. With some tweaks to the code he provided, here’s what I was able to produce: 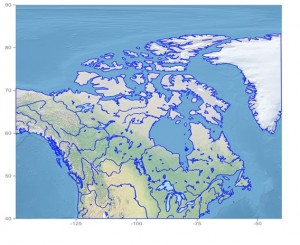 Didn’t think you’d see a map in a math and stats post? The map I created in R following Simon Goring’s tutorial.

With a few more lines of code, you can overlay additional layers such as country names, states, populated cities, airports, and more. It’s very neat and definitely worth checking out.

That’s all for today’s trio of Math & Stats articles! Remember to register your blog with Science Borealis to share your statistically significant insights with the rest of Canada.