Our most resilient organisms, emerging from the coldest reaches of the Earth, are essential avenues of research in astrobiology. They model what life might look like in the harshest corners of the solar system and allow us to test the survival limits of terrestrial life. How do these fascinating organisms help us expand our understanding of life in outer space?

In September 2020, new evidence revealed four lakes hidden beneath glaciers on Mars. And where there is water, there is the possibility of life â€“ taking us one step closer to answering the fundamental question driving astrobiology research: are we alone out here?

“A problem with finding life on any planetary body within our solar system and beyond has always been the search for water â€“ it’s essential for the biochemistry of life as we know it,” says Dr. Lyle Whyte, the Canada Research Chair in Polar Microbiology at McGill University. “Now, there’s evidence of liquid water in the subsurface… and occasionally on the surface of Mars. We’re also finding, beyond our solar system, evidence of other planets or planetary bodies that look like they could have liquid water. This changes the whole game.”

However, pure water on Mars either evaporates in the thin atmosphere or freezes due to the planet’s average temperature of â€“63 Â°C (â€“81 Â°F). Water can remain liquid on Mars only if it’s hypersaline. Salt disrupts the perfect alignment of water molecules needed to form ice, thereby lowering its freezing point. But there’s a limit to what life extremely salty water can sustain. Marine organisms, for example, typically only live in water of 3-4% salinity, with higher salt levels being fatal. Life in Martian lakes would have to face the seemingly impossible challenges of extreme cold and extreme salt.

But if there are organisms buried beneath the surface of the red planet, swimming in the freezing, salty water and breathing without oxygen… what would they look like?

The answer could lie in the Canadian High Arctic, where the arid sub-zero climate creates one of Earth’s best analogues to Mars: a perfect place to look for the kind of organisms that might exist on the red planet. And scientists have found them in the form of extremophilic microbes.

While many of us shiver at the thought of stepping out in December without insulated, fur-lined parkas, some extremophiles have fully embraced the Canadian winter and in fact flourish in the Arctic. Extremophiles live in the world’s most extreme conditions, including icy cold, intensely hot, highly acidic, hypersaline, highly pressurized, or high-radiation environments detrimental to most known life forms. The more extremophiles we discover, the more we challenge our understanding of the limits of life.

The McGill Arctic Research Station (MARS) in Nunavut is located 900 km south of the North Pole. Reproduced with permission of Dale T. Anderson

In 2012, the McGill Polar Microbiology lab, led by Dr. Whyte, discovered a unique halocryophile (salt-loving and cold-loving) bacteria in the Canadian Arctic dubbed the ‘cold temperature champion’ of the microbial world. This bacteria, named Planococcus halocryophilus, was found to survive, reproduce, and grow at â€“15 Â°C and 18% salinity on Ellesmere Island, in Nunavut, Canada. With record-breaking survival abilities, it has since become a model extremophilic species for researchers around the world.

Dr. Whyte’s lab also discovered a diverse community of unique microbes in the Arctic that are “eating methane and breathing sulfate” and thriving at a remarkable 25% salinity. These ecosystems provide us with terrestrial analogues to cold and salty conditions on other planetary bodies. An isolated subglacial lake found beneath the Devon ice cap in the Canadian Arctic is the most exciting analogue reported to date. Any organisms existing within the unexplored lake will have evolved in isolation for the last 120,000 years. By studying how life evolves in such an extreme system, we can better understand what to look for in places like Mars, Europa, and Enceladus.

Europa and Enceladus, moons of Jupiter and Saturn respectively, hide extremely cold, kilometres-deep, hypersaline liquid oceans underneath their icy shells. For astrobiologists, the geysers of liquid water continuously erupting from the surface of Enceladus are particularly captivating. The Cassini spacecraft orbiting Saturn has passed through and analyzed these plumes, finding a much higher density of organic compounds than scientists expected, a potential sign of life. 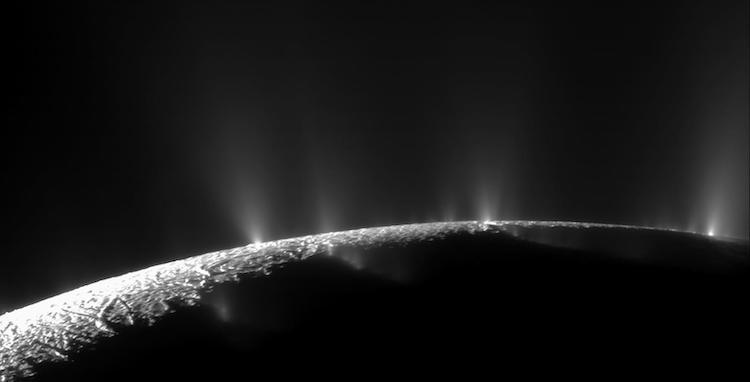 The sun spectacularly illuminates Enceladus’ jets of water in this photo from the Cassini orbiter. Cassini flew through these water plumes many times over the last decade. Image credit: NASA/JPL-Caltech/SSI

In 2022, the ExoMars rover will drill into the Martian permafrost for the first time ever, looking for biosignatures (signs of life like organic molecules, microbial membranes, and nucleic acids). Sediment preserving these biosignatures is most likely to exist in areas on Mars where water was once abundant, billions of years ago. Dr. Whyte, who helped select the mission’s landing site, thinks that while rovers are a good first step, sampling will be more efficient when humans explore Mars in person, which could be a reality by 2030. He says “the famous saying when looking for life on other worlds is: I’m not sure what it is, but I’ll know it when I see it!” 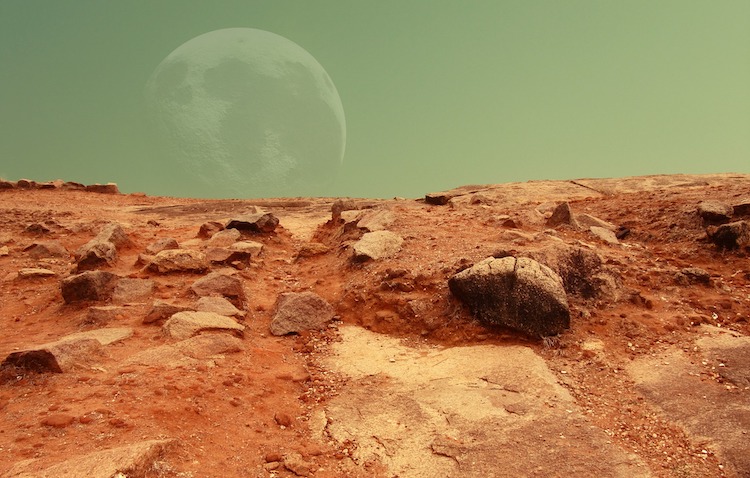 Although intense UV radiation hitting Mars makes the planet’s surface uninhabitable, ExoMars 2022 will drill a few metres into the permafrost, looking for life hiding safely away from the toxic soil. Image credit: ChadoNihi, CC0, via Pixabay

Extremophiles have become valuable tools in the search for alien life in cold environments, leaving scientists to wonder: what else might our extremophilic neighbours here on Earth reveal about the curious physiology of possible life in outer space? The possibilities are seemingly endless. Exploring the smallest and hardiest life forms may be the key to unlocking life’s biggest mysteries.

2 thoughts on “Life on the extreme edge: Microbes in astrobiology”