For many, summer means long nature walks and family BBQs. After spending an evening outside with my family doing the latter and being the only one to suffer a handful of mosquito bites, I wanted to learn more about mosquitoes and what makes someone more prone to being bitten by them. It turns out that many factors contribute to attracting mosquitoes, including your body odour, the colour you are wearing, and the amount of carbon dioxide you exhale.

There are over 3000 species of mosquitoes, but only 6% bite people. The reason certain mosquitoes bite us is because they need blood. Proteins and other nutrients found in human and animal blood are required to produce and nourish the mosquito’s eggs. This means that only females bite; males feed from plants.

Female mosquitoes have a specific mouth part called a proboscis that allows them to access blood. The proboscis is a long tubular micro-needle system composed of six stylets. As seen in the video below, mosquitoes use two of the stylets with razor-sharp teeth to puncture the skin while another pair of stylets act as mandibles to hold the skin apart. A sensory needle called the labrum locates capillaries to draw blood from, and a salivary canal – the hypopharynx – injects saliva into the area. The mosquito’s saliva has vasodilating, anticoagulant and antiplatelet properties. These properties allow the female to draw blood in seconds. This method is incredibly effective and requires three times less force than an artificial microneedle to penetrate human skin.

The injected saliva causes mosquito bites to be irritating. Mosquito saliva contains foreign substances which trigger an immune response—the release of histamine, a hormone that attracts white blood cells to the injury. Histamine is also the substance responsible for the hallmark swelling, redness, and itching of a mosquito bite.

The degree of response to a mosquito bite can differ from person to person. Skeeter’s syndrome is a condition experienced by people who are severely allergic to mosquito saliva and suffer from large red welts after being bitten. A person might experience a similar strong allergic reaction when bitten by a new type of mosquito for the first time. Over time, repeated bites from the same species may enable someone to develop a tolerance, meaning bites trigger a faster immune response and last for less time.

University of Minnesota professor Dr. Jon Oliver says, “It’s definitely true that some people are more prone to mosquito bites than other people.” It has to do with several reasons, most of which we have no control over. For example, studies show that mosquitoes prefer a particular blood type—type O. 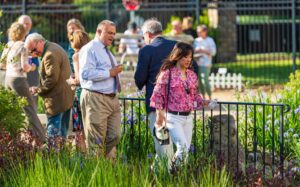 Wearing light-coloured clothing will make you less attractive to mosquitoes. Loose clothing with more coverage can also make it more difficult for them to bite. Image: Goeffrey Baker, CC BY-NC-ND 2.0.

After nearing a person, mosquitoes hone in on the scent of specific chemicals that produce body odours. Lactic acid, ammonia and a combination of odour-producing bacteria are components of human sweat—all of which attract mosquitoes. Dark colours also draw mosquitoes. Research shows that people wearing black are more likely to get bitten by a mosquito, though the reason for this is unknown.

Mosquitoes also learn from previous meals. Researchers at the University of Washington (UW) reported that “if a mosquito bites an individual with a certain odour profile and has a positive experience, it might learn to associate that odour profile with a high-quality blood meal.” The UW researchers concluded mosquitoes might choose to bite people with similar profiles in the future.

Although they may be a pain to deal with, most mosquito bites are harmless and do not affect your overall health. The problem arises when mosquitoes carry viruses like malaria, dengue, or West Nile and transmit them to people through their bite. These viruses make mosquitoes the deadliest animals on Earth. Malaria is the most dangerous mosquito-borne disease, claiming an average of 600,000 lives a year. Although malaria is rare in Canada, fear of mosquito-borne diseases has risen over the past few decades, with Ontario reporting its first West Nile virus case in 2002. Since then, numbers have fluctuated, reaching a peak of over 2000 cases reported in 2007. Fortunately, the number of West Nile virus cases has remained under control in Canada—active surveillance by the government monitors the mosquito population and takes measures to reduce the risk of infection.

What can I do?

Mosquitoes thrive in cool, wet environments near standing water. These areas are ideal breeding grounds. Females lay their eggs in standing water; the eggs hatch into larvae which mature in the water resulting in an adult mosquito. In the first week of July 2022, Calgary city officials reported more mosquitoes caught in their traps than during 2020 and 2021 combined. Officials speculated that mosquito abundance was due to the above-average rainfall and cooler temperatures. These conditions created more breeding sites. 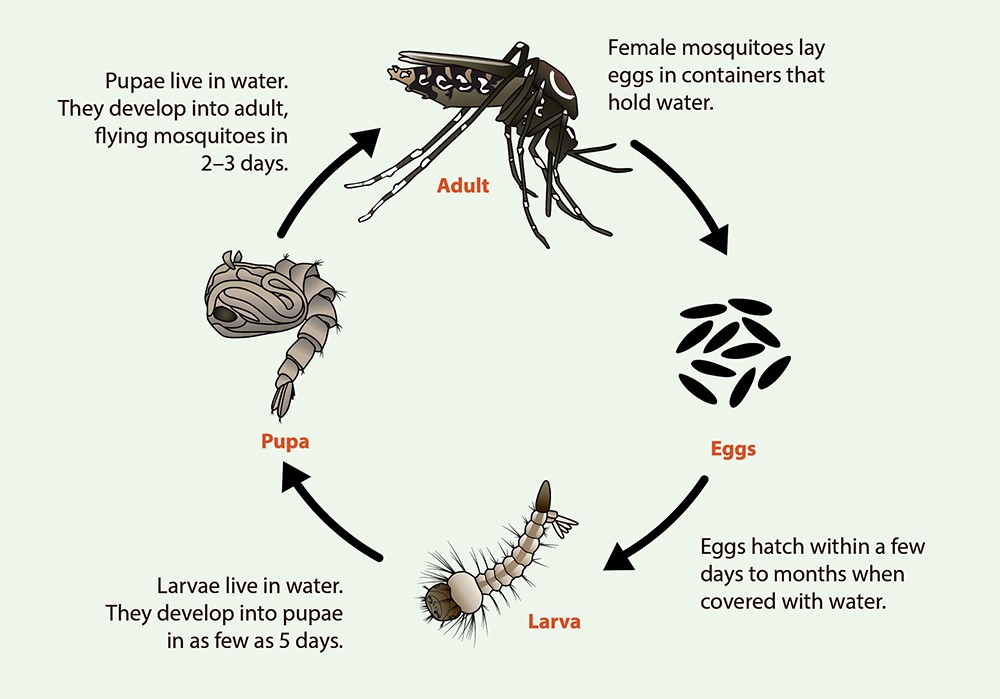 The life cycle of a mosquito. Standing water is essential for the success of mosquito reproduction. Image: Center for Disease Control and Prevention, Public Domain.

There are simple ways to decrease your chances of getting bitten by mosquitoes. DEET is a common mosquito-repellant used worldwide (the same ingredient used in OFF!). Comprised of 95% N, N-diethyl-meta-toluamide, this repellent interferes with the olfactory receptors on the mosquitoes’ antennae, rendering them unable to detect your body odour. Staying away from standing water and going outside during warm and dry weather is another good way to avoid mosquitoes. You should also wisely choose the colours you wear to an outing and wear loose rather than tight-fitting clothing. This can reduce sweating and body odour. If you get bitten, Emily Dennis, a neuroscientist at Princeton University, suggests running the bite under warm water to relieve the itching. Other common treatments include using an ice pack to reduce inflammation or taking an over-the-counter antihistamine.

The existence of mosquitoes may seem like a painful and dangerous nuisance, but they are critical to the ecosystem. They are an important food source for fish, birds, and reptiles, and pollinate many plants. Eradicating mosquitoes would lead to a chain reaction that could endanger other animals and plants. The key to dealing with these insects is to be cautious, not afraid. You should take the necessary steps to keep you and your family safe and, like me, remember to pack some bug repellent next to the sunscreen at your next BBQ.

A female mosquito gathering the bloodmeal she will use to produce fertile eggs. Image: Rawpixel, CC0 1.0.