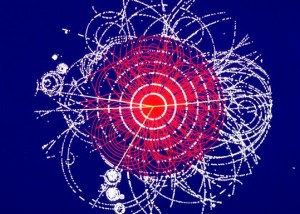 Simulation by the ATLAS experiment of the decay of a Higgs boson into 4 muons (yellow tracks). (Copyright CERN 1995, free for educational & informational use).

Gather near and listen closely,
The story isn’t crass.
It’s all about new physics seen,
The particle explaining mass.

After analyzing first run data,
Coming from the LHC,
Physicists reported with joy,
They made a discovery.

Proposed to collide protons,
at 14 TeV,
No collider before or since,
smashed with such energy.

It wasn’t until 10 years later,
That LHC was approved.
And count another 14 years,
‘Til the first beam went through.

To measure high energy particle collisions,
You need a detector.
Collaborations write letters of intent,
To the committee selectors.

The two big experiments are: ATLAS,
Compact Muon Solenoid.
They made up their proposals,
The machines to be deployed.

“The origin of mass at the electroweak scale,
Is a major focus of interest.”
That’s the search for the Higgs boson,
In particle physics, the business.

But these aren’t one trick ponies,
Multi-purpose experiments.
If there’s any new physics,
They’ll pick up the scent.

Top quark physics, CP-violation,
Even supersymmetry;
All of these may be studied in-house,
At the LHC.

So proposals went through approval steps,
And vast caverns were dug.
It took 16 long hard years,
To tighten the final lug.

The entire project as a whole,
Is a huge collaboration,
With many, many physicists,
From many, many nations.

Canada has much to brag,
About our contributions.
We’ve built magnets, hardware, software, optics,
In labs across the nation.

And so, much excitement was stoked,
About the LHC.
The promise of the Higgs and more,
Possibilities plain to see.

There was also some concern raised ‘bout,
Black holes swallowing the Earth.
But this unease was put to bed,
With a study of the holes’ birth.

Finally in 2008,
The first beam passed round.
The world waiting with bated breath,
For Nature to astound.

This first run broke energy records,
A first in history.
7 TeV at the centre of mass,
Set new particles free.

But nine days after starting up,
Node down! Electrical fault!
Months and days of fixes later,
The waiting came to a halt.

And so all throughout 2011,
Protons smashed into protons.
Almost 600 trillion times that year,
Collisions were recorded.

Collecting data throughout this run,
The experimenters had their fill.
Petabytes of information recorded,
A fertile soil to till.

And so, after analyzing all this data,
Coming from the LHC,
Physicists reported with joy,
They made a discovery.

A particle that appears consistent,
With the Standard Model Higgs;
A boson at 125 GeV,
Announced by the bigwigs.

After all this success, after this goal was met,
What could be left for the machine?
This year in June, it started up again,
And even higher energy was seen.

More momentum embedded, more collisions per second,
Run two promises something new.
At 13 TeV centre-of-mass,
Physics beyond Standard is due.

Already we’ve seen new types of things,
Like evidence at high mass.
Pentaquarks are the latest find,
A particle of a new class.

And so the LHC will continue to run,
Delving into unknown territory.
Standing on the shoulders of giants,
Writing the ultimate story.