If you’ve gone shopping for a houseplant recently, you might have noticed that some species, like spider plants and peace lilies, are identified as having air-purifying qualities. This labelling isn’t just empty marketing. A study done by NASA 30 years ago tested the air-purifying capacity of ten common houseplants and found that each plant could remove a broad range of toxins from indoor air. This finding raised an interesting question for researchers and urban planners worldwide â€“ could cities use plants to improve air quality outdoors?

Air pollution, especially in urban areas, is a global health hazard. According to the World Health Organization, nine out of ten people worldwide are exposed to unacceptable air pollution levels. This exposure leads to seven million deaths each year. As cities expand and become more densely populated, air pollutants, such as nitrogen oxides and particulate matter, increase. 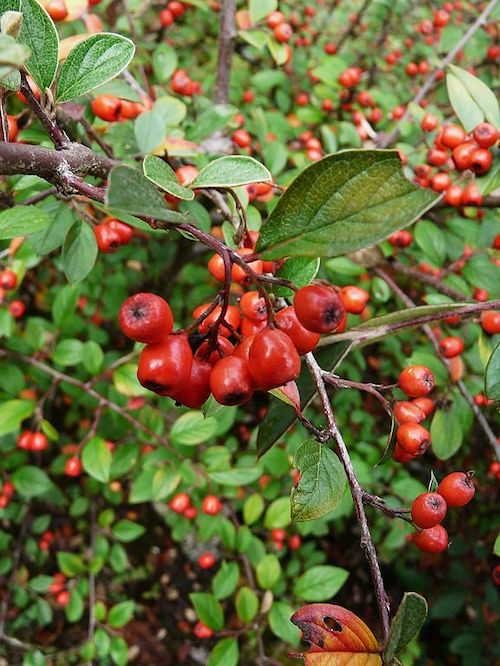 Trees and forests are often referred to as the “lungs” of the planet because they take in carbon dioxide and release oxygen. But, according to plant physiologist Rita Baraldi, trees and other vegetation also act as an ecosystem’s liver, filtering atmospheric pollutants out of the air with their leaves.

Recently, a United Kingdom-based study identified Cotoneaster franchetii as a super plant due to its high capacity for soaking up roadside air pollution. A bushy, evergreen shrub from southwestern China, C. franchetii takes in at least 20% more pollutants along busy roadways than other plants, like hawthorn and western red cedar. According to the study’s lead researcher, C. franchetii’s success lies in its hairy leaves and dense structure.

While C. franchetii may not be the best choice for Canada’s cold climate, global interest is blossoming on the topic of ways to keep the air clean and our cities livable.

Dr. Richard Baldauf is a Physical Scientist and Engineer at the U.S. Environmental Protection Agency’s (US EPA) Office of Research and Development. He studies the use of roadside vegetation to reduce air pollution. He says that while plants can help reduce harmful gases like nitrogen oxide, they are most effective at filtering particulate matter, especially ultrafine particles and larger coarse particles.

“Since particulate matter is a major contributor to adverse health effects from air pollution, we typically focus on this pollutant when considering the potential benefits of roadside vegetation,” Baldauf says.

In 2016, he was the lead author on the US EPA’s recommendations for developing roadside vegetation barriers, a set of guidelines for cities that want to increase the “green infrastructure” along their busy roadways to reduce air pollution. While research indicates that some outdoor plants can help clear the air, there are many factors that cities need to take into consideration before they start lining their roadways with plants like C. franchetii.

To start, picking the right plant for the right location is key. For example, evergreen plants provide better year-round pollution reduction than deciduous plants. Some plants, like C. franchetii, have waxy or hairy leaves that are better for trapping particulate matter. Cities must avoid planting invasive species, poisonous plants, or vegetation that emit volatile organic compounds or lots of allergy-inducing pollen. And cities should invest in plants that will thrive in the local climate.

“If [a plant] species is not native to a certain location, it may not grow as well, and thus not provide the pollution benefit,” says Baldauf. “Another consideration might be whether the species [is] resistant to the salt and sand applied to the roadways in the winter in northern locations like Canada.”

Baldauf and his colleagues at the US EPA also strongly encourage cities to have a good maintenance plan in place, as the vegetation will change over time due to growth, damage and disease.

“The amount of potential change in the vegetation will be different depending on the types and species chosen, which is why we suggest a plan specific to the [individual] project.”

According to Baldauf, cities that want to use roadside plans to improve their air quality need to start with a good understanding of their current air pollution burden and ask whether they have the space and the budget to plant and maintain roadside vegetation. They also need to take a close look at how the existing plant life in the city is impacting air quality and what other effects the vegetation barriers might have on their communities.

An i-Tree grows in Oakville, Ontario

Although using plants to reduce air pollution is not as straightforward as simply lining the streets with a single super plant, it’s a promising strategy that researchers continue to explore and that cities are already implementing. i-Tree is a software tool developed by the U.S. Department of Agriculture’s Forest Service. City planners can use it to measure existing “tree canopy” and select species to plant locally.

In 2005, Oakville, Ontario, embarked on a project using i-Tree to conduct an inventory of its local tree population and explore how they could increase the plant life in their city. Based on the data from this study, Oakville developed a plan to grow its urban forest. Through the PLANT campaign (Please Let’s Add New Trees), the city encourages residents to add to the town’s tree canopy and keeps track of the number and location of the new trees planted. Oakville claims that its expanding urban forest is the “solution to pollution” and the Official Community Plan includes “protecting and enhancing the urban forests” as one of their priorities.

As more communities look for ways to alleviate the effects of air pollution, we could see green spaces expanding and the air becoming clearer. Apart from keeping the air clean, this approach could also benefit cities in other ways, such as expanding habitat for wildlife in urban areas, reducing daytime heating in the summer, and soaking up carbon dioxide.