Birth occurring before 37 weeks of pregnancy is a leading cause of newborn death, disability, and developmental delays in humans. With 15 million babies worldwide â€“ and eight per cent of babies in Canada â€“ born prematurely each year, early birth is associated with massive healthcare costs and can lead to serious life-long complications. Rural populations with limited access to higher-level emergency care are especially vulnerable.

Despite this burden, 45â€“50 per cent of preterm births occur due to unknown causes, and no effective method yet exists to predict or possibly prevent premature birth.

This is where Dr. Daniel MacPhee and his team at the Western College of Veterinary Medicine come in. A reproductive biologist by trade, MacPhee has dedicated his career to answering birth’s biggest questions â€“ like how a ball of cells burrows itself into the mother and becomes a breathing, crying baby. Under the banner of the college, his research spans across many species, using rat uteri, pig placentae, and human cells to piece together the puzzles of pregnancy.

Of particular interest is how the myometrium â€“ the smooth muscular layer of the uterine wall of mammals â€“ goes from a small, inactive tissue to what he calls a “contractile powerhouse at term.” These changes in the myometrium are thought to be important factors contributing to a person delivering at or before the 40-week term that is considered normal for pregnant women.

“Recent studies show that labour can be understood as an inflammatory event involving the myometrium,” he says.

By better understanding this inflammation, MacPhee is unraveling the complex web of how and why labour occurs in normal and preterm birth. 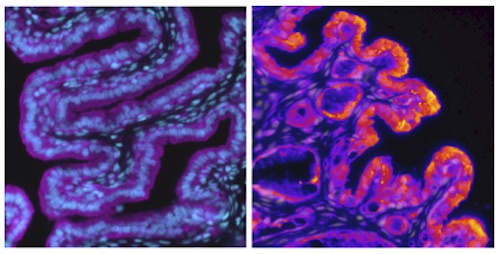 Tissue cross sections of the rat endometrium during (left) day 15 and (right) day 22 of a 23-day pregnancy. Left: Proteins which generate inflammation have been fluorescently stained and artificially coloured magenta; the nuclei of the endometrial cells have been DAPI-stained and are falsely coloured cyan. Right: Inflammation-inducing proteins were made to fluorescently glow. The endometrium is the layer of the uterus which interfaces with the placenta/fetus. These images were taken using Epifluorescence microscopy by Nicholas Bauer, supervised by Dr. Daniel MacPhee at the Western College of Veterinary Medicine. Permission to publish granted by Dr. MacPhee

As part of their investigations into uterine inflammation, researchers have identified a class of enzymes that produce low levels of oxidants. Oxidants, also known as reactive oxygen species, are highly volatile molecules produced from infection, radiation or metabolism. High levels of oxidants are associated with pain, aging and disease â€“ which has led to many, often untested and unproven anti-oxidant treatments, foods and other products being marketed online to promote health and longevity.

Although oxidants can be harmful at high levels, an increasing body of research supports that low levels of oxidants are produced by the body and play a crucial role in its various functions. Other researchers have focused on the role of these physiologically produced oxidants in our immune response to invaders, the regulation of blood vessel diameter, and thyroid hormone production. MacPhee, however, is among a few scientists investigating oxidants’ role in pregnancy and childbirth.

“In essence, reactive oxygen species can act as signalling molecules, initiating a cascade of events leading to the production of inflammatory cytokines and ultimately, myometrial inflammation,” he says.

The inflammation of the myometrium combines with other complex signals from the placenta, uterus, mother, and fetus to regulate when childbirth will occur. In combination with his work on inflammatory induced heat-shock proteins, MacPhee’s investigation into oxidant-generated myometrial inflammation could lead to the development of biomarker tests to predict when labour will occur and the discovery of drugs that could prolong pregnancy to a full term.

Off of the bench and to the bedside 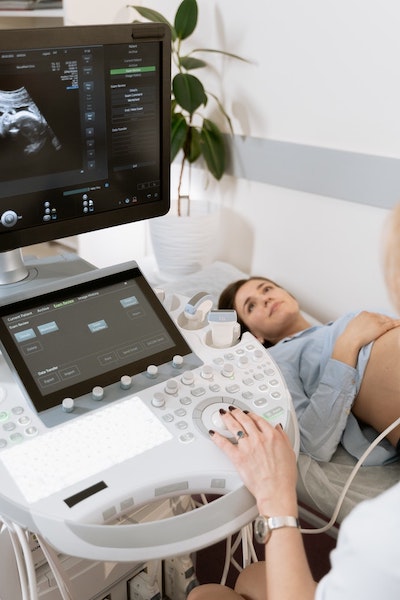 Tools to predict and prevent preterm labour would be game-changers for clinicians â€“ and expecting parents. Image, CC0, via Pexels

Tools to predict and prevent preterm labour would be game-changers for clinicians, who currently don’t have a lot of options at their disposal.

Dr. Lindsey Broberg, a fourth-year Obstetrics and Gynaecology resident at the University of Saskatchewan, says the burden preterm labour can place on patients and the healthcare system is huge. Among other risks, she says, “Preterm birth may result in respiratory distress syndrome, cerebral palsy, blindness, intraventricular hemorrhage [brain bleed], and potential neurocognitive delays, among other short and long-term complications.” The statistics are woeful, and the burden is clear, with studies reporting that preterm births account for approximately 70 per cent of newborn deaths and 25â€“50 per cent of long-term neurological impairment.

Many of these conditions can affect a person for life. Although these outcomes are worrisome, serious complications can be partially mitigated if the premature baby receives neonatal intensive care at a high-level clinical centre (NICU).

Recent studies indicate that with hospital closures, however, maternity services are diminishing for rural and especially Indigenous communities. These populations are becoming further removed from life-saving obstetric interventions, including neonatal intensive care.

“In the absence of clear-cut answers in Obstetrics, a patient’s clinical history becomes a powerful tool,” Broberg says. Without an effective way to predict labour, she and other clinicians rely heavily on their patient’s history and clinical presentation.

“Previous premature delivery is a significant risk factor in predicting early labour in future pregnancies,” she says. If preterm labour is suspected to occur during pregnancy based on their past experiences, rural women are expected to relocate to their closest high-level clinical centre â€“ possibly a plane ride away. These accessibility challenges remove women from their communities, cultures, and support networks for what can be months.

If Dr. MacPhee and his team are successful, early identification of labour biomarkers could bring predictability to the uncertainty of when labour will occur. In addition, better understanding of the inflammatory mechanisms of the myometrium could lead to the discovery and development of drugs to delay the onset of labour and help bring a pregnancy to term.

“Discovery of an effective tocolytic [drug to delay contractions, labour or birth] would allow expectant parents a greater sense of control and autonomy over their birth process,” MacPhee says.

Although this goal is ambitious, these drugs could help reduce the serious complications associated with early birth, bettering the lifelong health outcomes for those born of the eight per cent of preterm pregnancies in Canada.

Banner image: With 15 million babies worldwide â€“ and eight per cent of babies in Canada â€“ born prematurely each year, early birth is associated with massive healthcare costs and can lead to serious life-long complications. Photo by Jonathan Borba, unsplash

Nicholas (Nick) Bauer, a fourth-year cellular, physiological and pharmacological sciences honours student at the University of Saskatchewan (USask), was a summer research student at the Western College of Veterinary Medicine (WCVM) in 2021. He wrote this article as part of Science Borealis’s Summer 2021 Pitch & Polish, a mentorship program that pairs students with one of our experienced editors to produce a polished piece of science writing.