My kids lie quietly on their bellies in the grass. They are watching a monarch butterfly flutter from flower to flower, daintily sipping the nectar with its straw-like proboscis. Watching its breezy movements in a backyard garden in Montreal, you could forget the herculean journey from the oyamel fir trees in Mexico’s central mountains that preceded this placid summer’s day. 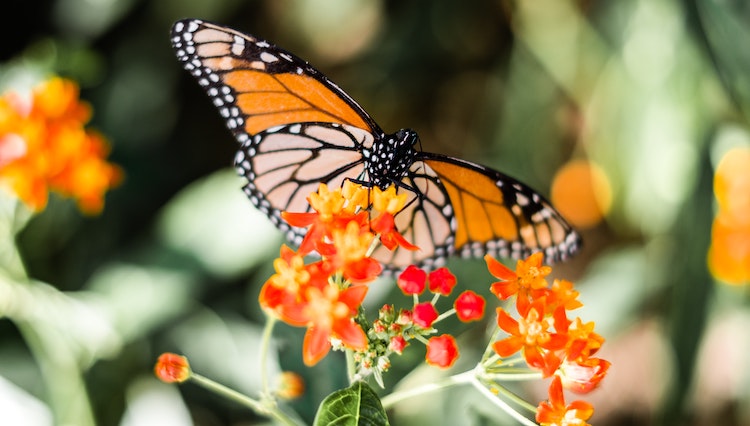 Each spring, monarch butterflies migrate 5,000 kilometres from their southern overwintering grounds to the summer breeding grounds in Canada. The butterflies stop to lay eggs along their migratory route, with the next generation hatching out, maturing and continuing north.

This cycle repeats itself several times before the monarchs arrive in Canada. The butterflies in my garden may be five generations removed from those that left Mexico.

Dr. Carolyn Callaghan, the Senior Conservation Biologist for Terrestrial Wildlife at the Canadian Wildlife Federation (CWF), has vivid memories of watching monarch butterflies as a child. These memories, and learning that this important pollinator was listed as endangered in 2016 by the Committee on the Status of Endangered Wildlife in Canada (COSEWIC), led her to spearhead a new program to restore pollinator habitat.

Although monarchs were the inspiration for this project, they are only one of many pollinators. Bats, birds, moths, wasps, flies, and bees also transfer pollen within or between flowers. These animals not only support crops but sustain healthy ecosystems and maintain biodiversity, including native plant species. Studies show there is a global decline in the number of pollinators, largely due to a loss in feeding and breeding habitats caused by climate change and intensive agricultural practices.

Over the past decades, there has been much work done to preserve the wintering grounds of monarch butterflies in Mexico. However, industrial agriculture and the increased use of the pesticide Roundup throughout the monarch’s breeding range and along its migratory routes continues to lead to a decline in butterfly numbers.

Roundup is an extremely effective herbicide that is “probably carcinogenic” according to the Milkweed is one of the weeds commonly targeted by Roundup but is also the sole host plant for the monarch butterfly caterpillar. As milkweed is eliminated by Roundup, vast areas of habitat are no longer available to monarchs for breeding.

Callaghan is aware that the practices of industrial agriculture cannot be changed overnight. Instead, she looked to Canada’s 1.4 million kilometres of roadways, 12.3 million backyards, and hundreds of thousands of kilometres of powerlines and pipelines to create and conserve pollinator habitat. 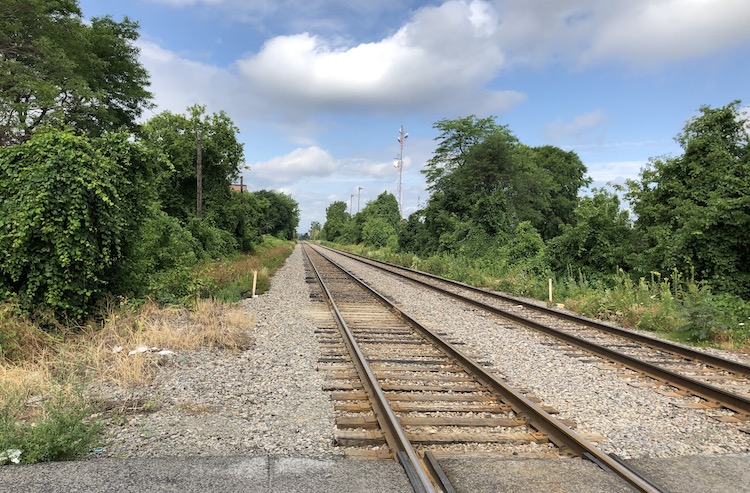 The type of working landscape that the Canadian Wildlife Federation would like to convert into a wildflower meadow. Photo by Silvie Harder

This land, known as rights of way, is maintained by provincial governments and utility companies. Rights of way are not at risk of future development and offer an extensive network of interconnected linear tracts, which could link landscapes and create safe corridors for wildlife such as pollinators.

At the University of Illinois pioneered habitat conservation on “working landscapes”, as rights of way are also known. The CWF’s project is modelled after this initiative. When the program is up and running, it will be the Canadian chapter of the U.S. group. 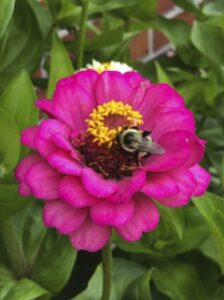 Diversity and native vegetation are essential for healthy pollinator populations. Mown grass along roadsides is a desert for pollinators, because no pollen-producing flowers are found there. The CWF is hoping to reduce mowing significantly so native wildflowers can grow, providing a space for pollinators to feed and breed. A passive, cost-effective initiative called Grow it! Don’t mow it! is being promoted by the CWF to increase the availability of food and shelter for pollinator species.

The next step in the project is to provide resources, training, and habitat restoration knowledge to support the restoration efforts of rights of way managers in transportation departments and power companies. The CWF is hoping that restoration activities, such as planting native seeds and native plant plugs, will become part of the regular care in rights of way. When this planting is coupled with reduced mowing and spraying, native species have a greater chance of thriving.

Callaghan says it takes about three years for native wildflowers to become established, but once they are, “They can hold their own…species like goldenrod have big elbows; they can elbow out the competition.”

The project is still in its fledgling stage. So far, only partners in Ontario have signed on – the National Capital Commission in Ottawa, Ontario’s Hydro One (which owns 33,000 kilometres of hydro lines), and Lanark County.

The limited number of partners is only one obstacle. Others include insufficient funding, lack of local expertise, and inadequate native seed supplies.

But the CWF wants Canadians to dream big and picture a Great Canadian Pollinator Pathway. “Just imagine those 1.4 million kilometres of roads with wildflower meadows on the sides. It’s an incredibly beautiful vision and I think we can get there,” Callaghan says optimistically.

Across Canada, awareness of the importance of pollinators is spreading. The CWF is encouraging citizens to get involved in the program by mowing less and planting pollinator-friendly flowers. In our Montreal neighbourhood, the neighbours have started leaving the clover, goldenrod, and dandelions in their gardens, to provide space and food for important pollinators like the monarch butterfly.

Although gestures like these may seem small in the big picture of the thousands of kilometres involved in butterfly migration, efforts to protect and create pollinator habitat are increasingly important in the face of climate, ecosystem, and land-use change.