When Science Borealis spontaneously generated during the last decade, the Multimedia category became a catchall for content that you might not expect to see in a typical science blog. With 2020 hindsight, we look over the past decade to share some of our favourite examples of SciArt, which we broadly defined as creations straddling art and science. While we maintain admiration for these works and artists/scientists, we hope that they’ll also remind you of other works that have brought some wonder to your lives. 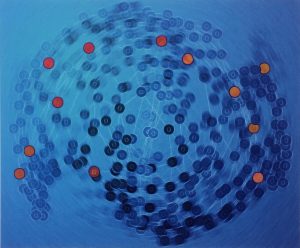 Raymond Nakamura (RN): On my way through the Toronto Pearson International Airport in 2019, I was pleasantly surprised to see some interesting images hanging on the wall. It turned out that they were renderings of scientific data. The intent behind a work of SciArt varies with each practitioner. Although these pieces did explain their contents, they also piqued my interest in their creators. I contacted one of them, Vuk Pavlovic, at the Bader Lab at the University of Toronto. He told me he generated the above image of gene interactions using software called Cytoscape, for a conference. “Our work generally involved the analysis of countless data points representing interactions between genes, proteins, drugs, and other molecules. Visual mapping via networks was used to make the data more approachable for humans.”

Katrina Vera Wong (KW): Ani Liu has consistently blown my mind with her work. She’s a research-based artist working with science, technology, and design to create sensory experiences that question what is natural and what it means to be human. She has controlled sperm with her mind, quantified her person in vitrines, and harvested human sweat for plant consumption in a live art installation. My favourite work by her is the idea of making flowers smell like humans that she proposed in 2017. She’s succeeded in bottling people’s scents, but the technology for a flower that produces human scent has yet to be developed. When it does come to fruition, how extraordinary would it be to smell a flower and recognize a loved one? 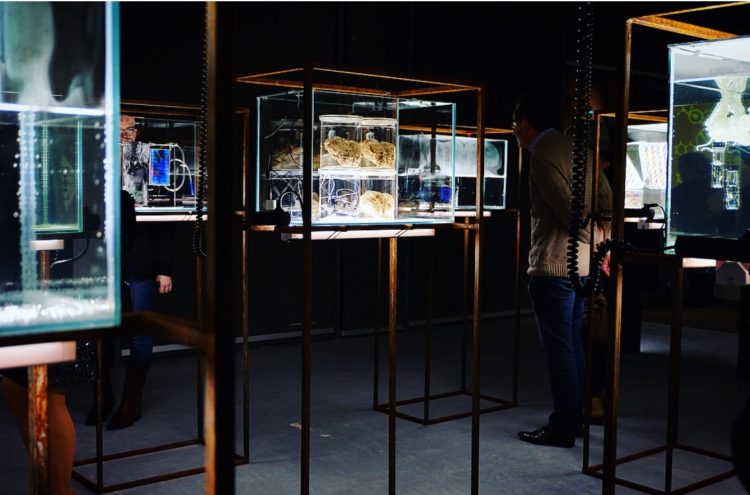 Untitled: (A Search for Ghosts in the Meat Machine); image courtesy of Ani Liu 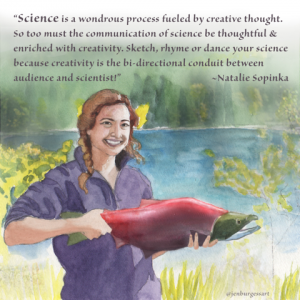 RN: Since its inception, Science Borealis has been about promoting Canadian science communicators. By far our most ambitious project has been 100 Voices for Canadian Science Communication, sharing quotes by and images of Canadian science communicators. Launched in 2016, the project involved gathering quotes and creating original illustrations of the speakers. Most were created by Peggy Muddles and some others, including me. Above is one illustration I particularly liked featuring Natalie Sopinka by Jen Burgess.

KW: Since 2006, sculptor and environmentalist Jason deCaires Taylor has created unique underwater gallery spaces that function as artificial reefs for coral and other marine life. Casts of people in various positions and micro-milieus, made from pH neutral marine-grade cement, pepper the ocean floor in powerful displays inviting an awareness of the ocean’s health. His most recent and perhaps most astounding sculpture, the “Ocean Siren”, stands tall above the Davies Reef in Townsville, Australia. It’s powered by nearby solar panels and continually changes colour to reflect the changing water temperature of the Great Barrier Reef. Modelled by a local Wulgurukaba girl named Takoda Johnson, the Ocean Siren holds a Baylis shell up to the air, warning us of the threat of warm waters and coral bleaching. 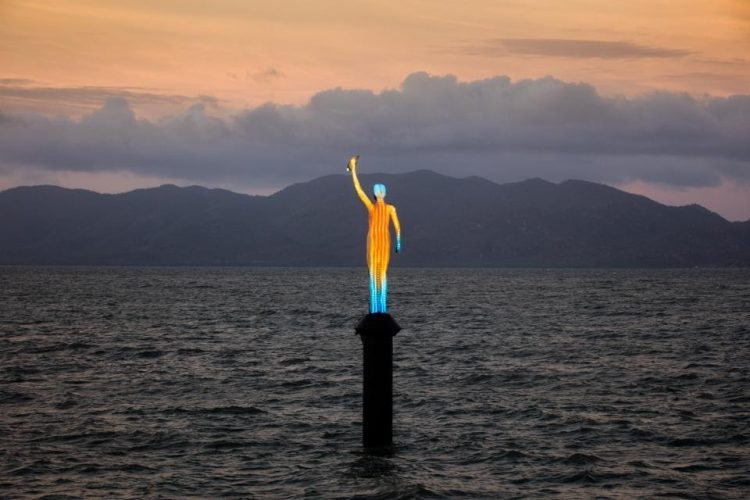 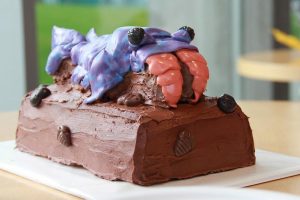 RN: One way to internalize science is to have your cake and eat it too. The Beaty Biodiversity Museum at UBC ran a cake contest to celebrate Charles Darwin’s 200th birthday in 2009, and continued it for a few years after that. This is an example from 2013 by Derek Tan, called Anomalocaris canadensis, after the fossil found in the Burgess Shale. Combining evolution with artistic baking seems like a sweet idea to me.

KW: The first time I visited the Beaty Biodiversity Museum in 2016, I went with the intention of marvelling at pressed flowers. Brigitte Potter-Mael, an artist living and working in Canada since 1977, was exhibiting her botany scrolls in “From Meadows Woodlands Far and Near”. I was admiring them as I walked towards where they hung on the far wall, but as I got closer, I realized they weren’t pressed flowers at all. They were watercolours. Inspired by plants from Lone Valley, Germany and British Columbia, Potter-Mael had illustrated plants with such beautiful and delicate realism that, in the moment, I felt magic. 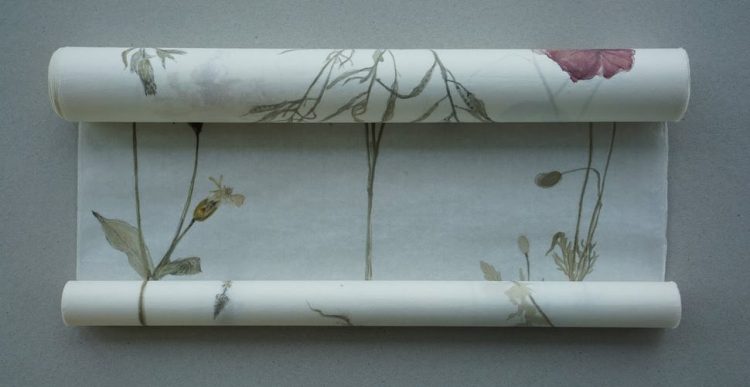 RN: Sharing stories about scientists from underrepresented groups can help diversify science. Vancouver-based Curiosity Collider brings artists and scientists together to create SciArt that inspires future scientists and enhances the public appreciation of science. In 2019, they ran Her Story: Canadian Women Scientists, a project that sponsored the creation of short videos celebrating Canadian female scientists, curated by Larissa Blokhuis. My favourite was an animated video about geneticist Irene Uchida created by scientoonist Armin Mortazavi and neuroscientist and science communicator Samantha Baglot. 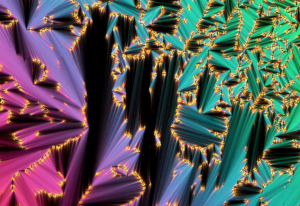 KW: I didn’t have very good chemistry teachers in school and never loved the subject, but materials scientist Vance Williams changed my mind. He leads the Williams Research Group, an organic materials chemistry group in the Department of Chemistry at Simon Fraser University, and has been capturing brilliant microscope images of crystals since 2015. He is “continually captivated by the idea of emergent behaviour: unimaginably tiny molecules [that] organize themselves into assemblies that give rise to the patterns that can be seen under the microscope.” (Takes me back to when my love of science was brewed in a beaker of golden glitter.) A feast for the eyes and kindling for curiosity, his images never disappoint. 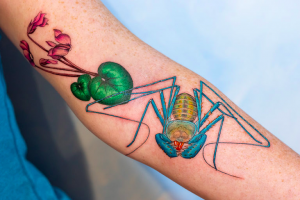 RN: Science tattoos represent a level of personal commitment to science communication that is beyond me. Science writer Carl Zimmer has even written a whole book about this phenomenon, called Science Ink. Peggy Muddles is seriously committed to SciArt and her tattoo of the whip spider is beautiful and scientific. I liked this one because it looks amazing and is not an organism you see very often. Entomologist Gil Wizen described his involvement in designing the tattoo and the process behind it in this blog post.

KW: There’s no way I can list my favourites and not include Raku Inoue. Based in Montreal, he arranges parts of fresh flowers and plants to form various insects and animals, and every time he posts something new to Instagram, my cheeks turn red from having slapped my own face in awe. The transformative grace that permeates his work reminds me of a translated poem by Arakida Moritake that goes: “A fallen blossom \ returning to the bough, I thought — \ But no, a butterfly.” 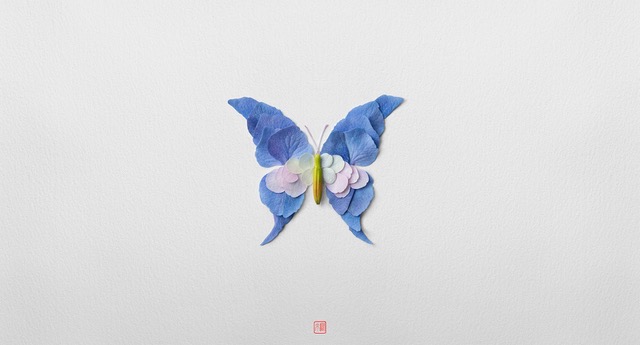 We gave ourselves a self-imposed limit of ten favourites from the last decade, which obviously meant many possibilities were left out, like Mika McKinnon’s Twitter thread about The Rock (which Dwayne Johnson retweeted) or the intriguing online exhibits of SciArt in the Polyfield Gallery by Art the Science.

What would you have included among your favourite examples of multimedia SciArt from the past decade? We’d like to know.