Harsh terrain and brutally cold temperatures are not the only dilemmas Arctic dwellers face. Dr. Emily Jenkins and her team of researchers at the University of Saskatchewan’s Western College of Veterinary Medicine have identified parasites in the gastrointestinal tract of carnivores from northern Canada as Echinococcus spp, a small tapeworm no larger than a mustard seed. Despite its miniscule size, Echinococcusis extremely dangerous. 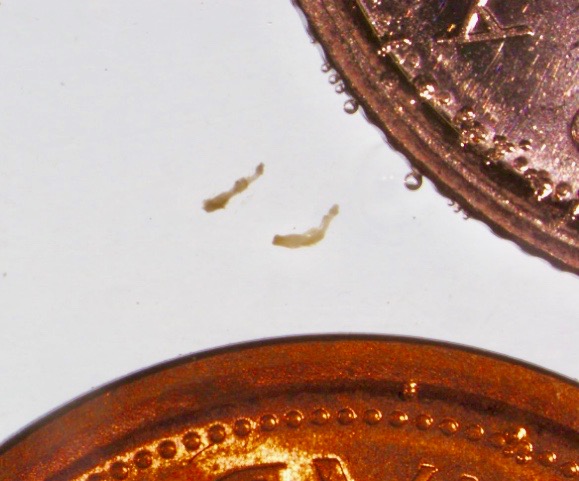 Echinococcus multilocularis and E. canadensis are two species of the parasite that are present and emerging in Canada. Although the parasite occurs worldwide and many cases of human echinococcosis have been diagnosed elsewhere, few Canadians are aware of the growing risk. The World Health Organization considers human echinococcosis to be a “neglected tropical disease,” but Echinococcus is not restricted to the tropics – and it appears to be becoming more common, even in regions as cold as the Canadian North.

In the Arctic, E. canadensis often uses wolves as definitive hosts – hosts that are required for the parasite to survive or reproduce – but can infect coyotes, foxes and other members of the dog family, including pets. Moose, elk, deer and other cervids usually serve as intermediate hosts in which the parasite undergoes development and asexual reproduction. E. multilocularis also uses dogs as definitive hosts, but typically circulates in rodent intermediate hosts. 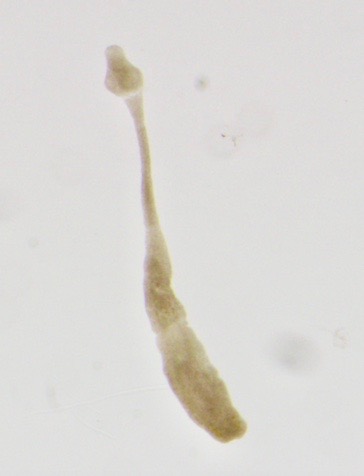 Echinococcusis a public health concern because it also infects people. Echinococcosis, a condition where a large cyst develops in the liver, lungs or other organs, can develop when people consume Echinococcus eggs shed by definitive hosts, often pet dogs that have scavenged on wildlife carcasses. Dogs, as both intermediate and definitive hosts of the parasite, are also at risk of developing echinococcosis.

“The cysts can affect people in the same way that a tumour would,” says Joy Wu, an undergraduate research student working in the Jenkins lab. “Just like cancer, echinococcosis can be a very serious illness that may require surgical or chemotherapeutic treatment.”

Of particular concern is that, when infected, intermediate hosts show no clinical signs. This means owners of infected dogs may have no idea their pets are carrying the parasite in their gastrointestinal tracts. This puts humans at high risk of being infected unknowingly.

At the Jenkins lab, adult Echinococcus worms were collected and counted from the intestines of wolverines, coyotes, wolves, red foxes and arctic foxes that had been trapped or hunted in the Yukon and Northwest Territories for other purposes. Researchers then confirmed that the worms were either E. canadensis or E. multilocularis using a technique known as polymerase chain reaction, or PCR. 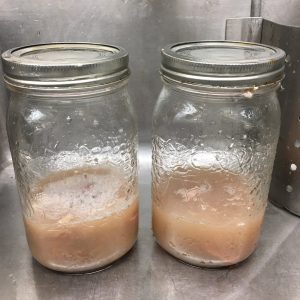 Jars with segments of Arctic fox intestine submerged in water. The contents of the jars are about to be filtered and examined under a microscope so that the number of Echinococcus spp adults can be counted. This technique is considered the gold standard for determining the intensity of Echinococcus spp infection in an animal’s gastrointestinal tract. Photo: Mila Bassil

The researchers found that E. canadensis was highly prevalent (76%) among wolves in the Yukon, while E. multilocularis was highly prevalent (26%) in Arctic foxes from islands off Inuvik in the Northwest Territories. By determining how common these parasites are, researchers are trying to gauge whether people living in the Canada’s north face increased risk for infection.

“If we see that the parasite is present in more wildlife than it has been in the past, then we can predict that it is more likely for humans to come into contact with it since it is more abundant in the population overall,” Wu says. “If more wild animals are infected, the parasite can spread between more animals more quickly, and domestic animals and people who come into contact with wildlife will be at a much higher risk of becoming infected.”

Rajnish Sharma, a graduate student working in the Jenkins lab, says that “based on a qualitative risk assessment, E. multilocularis has been ranked as the most important zoonotic parasite in the North from a public health point of view.” He says Echinococcus “has been an emerging parasite in the Canadian North due to multiple factors, including climate change and people-wildlife interfaces.”

Climate change and increasing interactions between people and wildlife may also be allowing Echinococcus – and possibly other parasites – to increase in the rest of Canada. 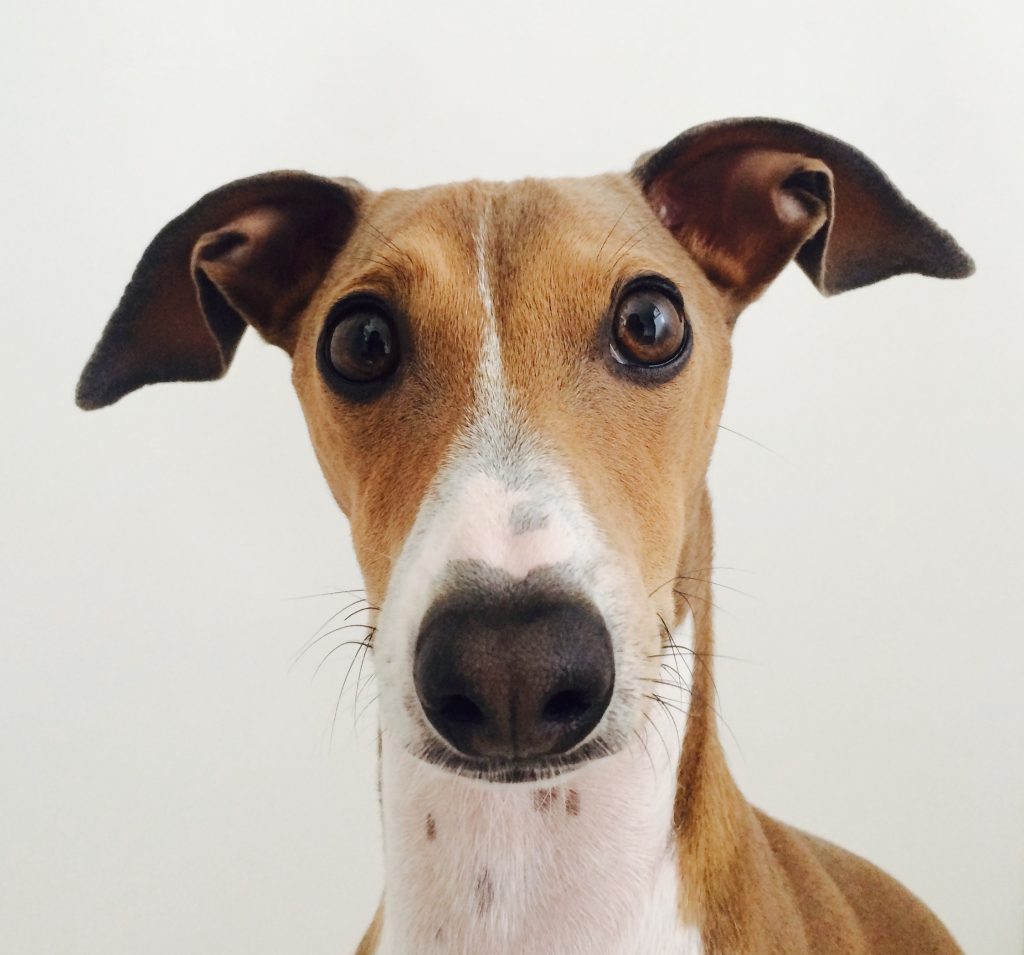 Dogs can be both intermediate and definitive hosts for Echinococcus spp. Contact with infected dogs is the most common way human develop echinococcosis. Regular de-worming treatments can help protect you and your dog from infection. Photo: Mila Bassil

Echinococcus eggs are extremely resilient to cold temperatures. For example, researchers had to freeze samples at â€“80Âº C to inactivate any eggs before they could safely analyze them. Even with the extreme cold tolerance of Echinococcus, Sharma predicts that the parasite will become even more abundant in the Arctic if temperatures were to increase. Rising temperatures and longer summers in the Arctic will extend the breeding season and allow more wildlife to survive in these regions. More wild animals means not only more hosts available for Echinococcus and other parasites to infect, but more sources of infection for animals and people altogether.

Few Canadians are aware of the risk that is emerging in our backyards. Echinococcus, a dangerous parasite known to be the cause of a widespread disease in the tropics, appears to be spreading and becoming more common in Canada – including in northern regions. As climate change continues to progress and the breeding and migration patterns of northern wildlife shift in response, we may – to our regret – find ourselves becoming far too familiar with this tiny tapeworm.

Mila Bassil is a student at the University of Saskatchewan’s Western College of Veterinary Medicine. She wrote this post as part of Science Borealis’s Summer 2018 Pitch & Polish, a mentorship program that pairs students with one of our experienced editors to produce a polished piece of science writing.
Read more about Pitch and Polish and other New Science Communicators programs>