Welcome to Physics and Astronomy on Science Borealis. We only have a few blogs in this category, so consider starting up your own blog and joining us!

Canada has a long history of innovation and research in both physics and astronomy, and this week we’re focusing on the astronomy side of things.

Canada is a financial and scientific partner in several international telescope programs, including the Canada-France-Hawaii telescope, the Gemini Observatories in Hawaii and Chile, the Atacama Observatory and Thirty Metre Telescope in Chile, and the James Webb Space Telescope. One of the more noteworthy Canadian telescopes is the 74 inch telescope at the David Dunlap Observatory (DDO) in Richmond Hill, Ontario. It’s the largest telescope of its kind in Canada and, when first built in 1935, was the second largest in the world. Researchers used this telescope to find the first direct evidence of the Cygnus X-1 black hole in 1971; its black hole status was definitively confirmed in 1973. Other landmark research at DDO included the classification of the North Star Polaris, and early work on globular clusters, which help define some of the inner structure of galaxies. 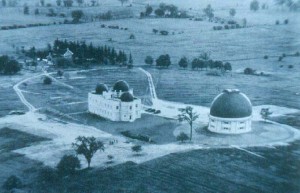 The David Dunlap Observatory in 1935.

While the DDO was built in what was originally a relatively remote location, the Toronto suburbs now surround the 189 acre parcel of land on which it sits. The University of Toronto was deeded the property in 1935 by Dunlap’s widow, Jessie Dunlap, but announced in 2007 that it wanted to sell the entire site. They cited encroaching development and lights from surrounding towns that interfere with astronomers’ ability to observe a dark night sky, making research at the site no longer feasible.

The town and citizens waged a legal battle against the sale, insisting that the observatory is a heritage site, and that the sale was a cash grab by the University. Their protests fell on deaf ears, and the University closed the observatory and sold the land to developers in 2008. The Royal Astronomical Society of Canada reopened the observatory in early 2009 under an agreement with developers; they use it mostly for public events and outreach initiatives. In late 2009, the main buildings and much of the land were declared a provincial heritage site, and the Ontario Municipal Board recently ruled that 60% of the grounds (including the buildings) be transferred to the town of Richmond Hill. Citizen groups continue to push for the remainder of the site to be transferred to the town for conservation, with a final ruling expected in 2014.

Since selling the site, the university has created the Dunlap Institute for Astronomy and Astrophysics to maintain the legacy of the telescope and the observatory. The Institute focuses on instrumentation work, developing new and novel technology with which to observe the universe. This complements the research of both the University’s department of Astrophysics and Astronomy and the Canadian Institute of Theoretical Astrophysics, located nearby.

In Canadian astronomy, astrophysics, and space news and writing:

Are you an undergraduate woman in physics? The physics department at McGill is holding the first Canadian Conference for Undergraduate Women in Physics on January 10-12. The registration deadline may have passed, but check if you’re interested.

Industry Minister James Moore presented the Review of Aerospace and Space Programs and Policies early in December, which suggests the Canadian Space Agency will see a much-needed boost in support.

If you wanted to mail a parcel across the galaxy, how would you tell the Milky Way Post where to send it?

This is delightful: two Canadian astrophysicists wrote a scientific paper on the physics of the TARDIS from Doctor Who, with an accompanying white paper in more accessible language.

Did anyone brave the cold to go meteor watching this weekend? Even though August’s Perseids are the best known meteor shower, the Geminids (which peaked on Friday night) are the most plentiful, and are typically slower moving and easier to see than many meteors.

Curiosity continues to discover new and exciting things on Mars. This time it’s evidence of an ancient fresh water lake! Two new papers in Science (here and here) have the full analysis, including Canadian contributions from the alpha-particle X-ray spectrometer team at the University of Guelph. (Full disclosure: I used to work with two of the Canadian co-authors.)

Next time we’ll highlight the physics side of this category â€“ and we hope to see more new blogs by then!

2 thoughts on “Taking to the skies with Canadian astronomy”