…Though, to be fair, we weren’t the only ones. People travel from all over the world to attend what has become an international coming “Together” of science communicators. ScienceOnline is an annual conference – now in its 8th year – that explores the ways in which the Web is changing how science is conducted, shared, and communicated. Not only is there a physical meeting, but the virtual linkages – via live streaming, live tweeting, and ScienceOnline watch parties – are truly designed to incorporate as broad an audience as possible.

One of the more attractive aspects of ScienceOnline is its un-conference format. Each hour-long session topic is introduced by a facilitator, who then opens the discussion to all attendees. Opinions, insights and questions can be posed by anyone, whether they’re a grad student who’s just begun blogging, or a journalist with 20 years of experience. This variety of backgrounds generates a lively discussion, both verbal and virtual.

Lisa attended a session on “Standards in Science Blogging”, led by SciLogs blogger Jalees Rehman. One of the topics that seemingly never gets old is blogging itself: what is – and what isn’t – a science blog? While some argue that blogs are purely opinion-based, others believe they’ve evolved into something more widely recognized and should therefore be bound by a set of journalistic or academic standards. The main discussion centred on whether science blogs should: (1) Strive for neutrality; (2) Present balanced opinions; and, (3) Use anonymous sources as a means to better critique the quality of the science.

A summary of the session is available here. Although there was no consensus on whether bloggers should interview scientists, there was an overall sense that they should provide readers with cues regarding their biases (i.e., pro-science, affiliation to research) and what framework they’re using (i.e., op-ed or journalistic). At the very least, bloggers should read and attempt to understand the research they’re writing about. This is common sense for writers, really, since getting it wrong not only affects readers’ perception and understanding of science, but ultimately effects the blogger’s reputation.

With Science Borealis in mind, Jenny attended sessions that focused on blog networks and online communities. These included “Online communities: meeting, managing and moving forward”, moderated by Lou Woodley (highlights from which can be found here); and “Blog Networks: Benefits, Role of, Next Steps” which was moderated by Scientific American Blogs Editor Curtis Brainard. This session included many experienced bloggers, editors, and community managers sharing lessons learned and more. It also inspired the idea of a Canadian science communication “incubator” for aspiring bloggers, science communicators and scientists…perhaps a future step for Science Borealis?

Mike (a ScienceOnline sponsor via Genome Alberta) attended a session on “Bootstrapped Videography”, run by Scott Huler from Scientific American. Scott tackled how science communicators use video on the obvious social media platforms like Facebook, Twitter, LinkedIn and YouTube – and how the size of these well-known sites can work against us when trying to stand out from the crowd. As other sessions on measuring science communication success and defining a target audience noted, choosing platforms, tools and outlets is much easier when you know what you want your outcomes to look like.

We learned much from all, were entertained by many – including science comedian Brian Malow, and the great PhD Comics illustrator Jorge Cham – and were deeply inspired by Nick Parker and the story of En-Able and by Dr. Meg Lowman. 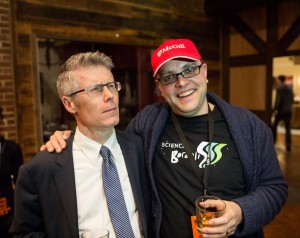 Those inducted as honorary Canadians included Fiona Smith Fee from Guernsey Island, Michael Halpern from the Union of Concerned Scientists, and Raleigh’s own Matt Shipman, to name just a few. There are more of you… you know who you are and we’re happy to have you! 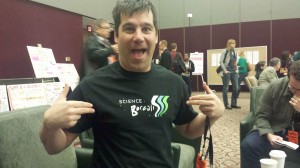 Our team was pleased to receive a kind and completely unsolicited shout out from Tim Skellet for our efforts in sharing the spirit of #cancomm.

Hope everyone following on Twitter and livestream had a great time – we’re happy to answer questions, and if you were there, too – add your comments below!

One thought on “The Canadians invade ScienceOnline…!”