Director of Communications, Students for the Exploration and Development of Space (SEDS-Canada)

In a fervent appeal to the United States Senate in 2012, Neil deGrasse Tyson declared that, as a culture, the US should boost their declining economy by overhauling their space program. Few would disagree that space is a gold mine that countries should invest in for compound economic gain – provided they have the funds.

Students for the Exploration and Development of Space (SEDS-Canada) is a student-run non-profit that moves beyond this narrow focus on space development as an economic driver. We see space as a perspective rather than just a research sector. Our mission is simple: to raise awareness that the perspective of ‘space’ can radically change the lives of ordinary Canadians, today – in fact, right now.

Our central philosophy is perfectly encapsulated in an excerpt from Sigmund Freud’s book On Transience, in which Freud walks with the poet Rilke in a beautiful meadow. Rilke becomes teary-eyed and, when Freud asked why, Rilke replies that he is saddened to know that the lush plant life in the meadow will eventually die, decay, and dissolve into meaninglessness.

As filmmaker and space enthusiast Jason Silva says, “space is an existential bummer.” SEDS-Canada follows the philosophy that, although beautiful things like Freud’s meadow may bring sadness because of their temporary nature, that sadness hints at an exception – a vision of something more. All of us have had this vision when we look up at the stars with our families or look through a telescope for the first time: we experience a sense of transience or awe. As Einstein said, “the most beautiful thing we can experience is the mysterious.”

SEDS-Canada supports this perspective of mystery and freedom, and aims to instill in our student members the encouragement and motivation to follow their dreams – whether or not they’re space-related. For the general public, SEDS-Canada will provide talks, conferences, debates, and discussions so that we can all engage in humanity’s exploration of the vast cosmos around us. Recognizing that the future of the space industry belongs to the youth of today, we want to empower student space enthusiasts by providing challenges and tools they’ll need to flourish in their careers.

Although there are challenges for the Canadian space sector in the form of budget cuts to both public space funding and university research grants, there is also an opportunity for the private space sector to flourish. For example, Canada has renewed its commitment to the International Space Station until 2024, according to the 2015 federal budget. This gives both our public and private scientists and engineers opportunities to develop further robotics and optic technology as seen in Canadarm2 and Dextre. Canadian scientists will also collaborate with NASA on future missions similar to the Mars Science Laboratory. SEDS’ role through this process of space privatization will be to re-invigorate the minds of youth and policy makers, inject a youthful passion in a space industry plagued by technicalities, constraints, and red tape, and monitor the public to private transition of the Canadian space industry.

To get involved with SEDS-Canada, sign up to our mailing list or keep an eye on www.seds.ca. Entries to our Young Space Entrepreneurs competition started last week, while our astrophotography competition will begin in winter 2015. Young Canadians interested in peeking behind the curtains of the Canadian space market can participate in the SEDS-Canada 2016 Ascension Conference at the beautiful campus of University of Western Ontario in London, Ontario. Registration will open in January 2016. SEDS was also featured in an October article in the Ottawa Citizen.

The Board of Directors is also looking for three staff members: a webmaster, graphics designer, and manager for the astrophotography competition. If you want to get involved at the local level, find a SEDS chapter at your university, or start one! For any questions or ways to get involved in other ways, interested parties can email communications@seds.ca. 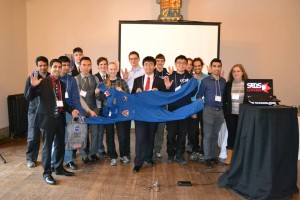