When my wife and I got engaged, one of our friends gave us a very special card featuring a familiar-looking shape. Drawing on my undergraduate chemistry courses, I identified it as the face-centred cubic crystalline structure of diamond; the little “C’s” stood for carbon. This was my first introduction to the work of Rovena Tey, who may well be Canada’s only chemistry artist. 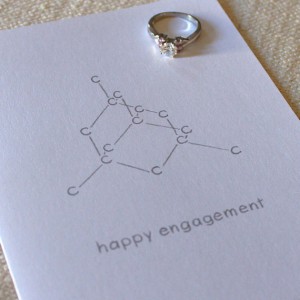 EThis engagement card, featuring the face-centred cubic structure of diamond, is one of over 50 designs by chemistry artist Rovena Tey (Photo R. Tey, used with permission)

A couple of weeks later I saw the designs again, in Toronto’s Arts Market. I bought a blue pin that says “Dream” and shows the structure of melatonin, a hormone molecule which influences sleep patterns. I also picked up several copies of a bright yellow card that said “Happy”, adorned with a picture of serotonin, one of the many chemicals thought to be involved in mood regulation. After that, my curiosity got the better of me, and I tracked down Rovena to find out what makes her tick.

Though she now lives in Toronto, Rovena grew up in Singapore. She ascribes any artistic leanings to her maternal side. “My mother and her sisters are very artsy; they’re good at sewing, cooking, floral arrangements and all kinds of crafts,” she says. She also had a lot of pen pals, and received letters regularly from the UK, Sri Lanka, Australia and Japan. “Something about receiving snail mail always delighted me,” she says. “Maybe that’s what drew me to start making cards.”

In addition to these influences, the prevailing Singaporean culture meant that Rovena was strongly encouraged to study hard in school, especially in math and sciences. That suited her just fine. “Science was always very interesting for me,” she says, adding that she read a lot of books as a child, including books about science. “I went into biology because I was fascinated with people: their diversity and their genetics,” she says. When Rovena was 13, her family moved to Canada. She went on to complete a master’s degree in Biology at McMaster University in Hamilton, Ontario.

After graduation, Rovena got a job as a writer for a publisher of scientific journals; she also worked in health care and cancer research. But her early passion for art found her again one day in 2005 when she came across one of her old lab notebooks. “The idea came to me that I should recycle these and make cards out of them,” she says. Her first work was a Christmas card, featuring poinsettias made out of that bright red notebook cover. The feedback from friends and family was positive, so she kept at it. 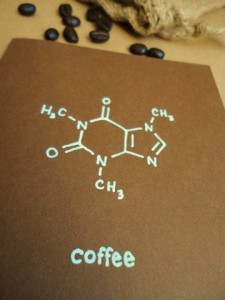 One day Rovena was just observing her husband with his coffee cup over breakfast. “My husband loves coffee, and he loves chemistry too. So he suggested I should do something about caffeine.” This first chemistry card, made from a brown notebook cover, opened the door to a whole new world of science-inspired designs.

Today, Rovena’s chemistry collection has grown to over 50 different designs of items ranging from greeting cards to calendars, pins and even bottle openers. She sells a few thousand units each year through Etsy, the Arts Market, the bookstore at McMaster University, and craft shows in Ontario. It helps that so-called ‘nerd culture’ has become progressively more mainstream in recent years. “Not everybody is into science, but I find that these days, everyone knows someone who’s into science,” she says.

Rovena has chemical structures for every occasion: birthdays (candle wax), beach parties (silica sand), motherhood (lactose), Chinese new year (potassium nitrate) and many more. There are even cards for less positive occasions, for example, when life gives you lemons (citric acid) or when sh*t happens (skatole). “At a recent craft show, I was approached by a couple whose daughter was studying chemistry,” Rovena recounts. “They were not sure if she was going to pass or fail her exam, so they bought two cards: the ‘happy’ card with serotonin, and the ‘sh*t happens’ card.”

All of her items are handmade — a process that takes place mostly at night, when her two young children are asleep — and feature elegant designs with bright colours. She gets new ideas all the time. “Curiosity is what drives me,” she says. “For example, I think of what’s in a birthday, and that led me to the wax in birthday candles, or the latex that’s in balloons. Other times, it’s the other way around: someone suggested to me at a craft fair that I should have an oxytocin card. I looked up the molecule, read about it, and decided on the caption ‘labour of love’ because it’s involved with happiness, bonding and pregnancy.”

The business has grown to the point where Rovena can do it full time, or at least, in whatever time she can spare from raising her kids. Her plan is to keep it up and see where it goes; the newest supplier to join her list is the Art.Science.Gallery. in Austin, Texas. “In our fast-paced world, I feel it is important to pause and appreciate the present, what’s around us,” she says. “That is why I am fascinated by the chemistry behind everyday things. Simply put, my designs are my chemical interpretation of life, and the result of curiosity meeting creativity.”