The year 2021 marked the 100th anniversary of the discovery of insulin. Diabetes was once a fatal condition, but in the past few decades, we have learned to manage it through medication, frequent exercise and strict dieting.

Even so, diabetes is one of Canada’s most prevalent chronic health problems. Today, approximately 1 in 10 Canadians has been diagnosed with diabetes. When we include undiagnosed diabetes and those at the highest risk of developing the disease, this figure increases to 3 in 10 Canadians.

While genetics can partially explain this gap, research suggests that social and physical factors may play a larger role in explaining these health disparities than previously thought.

Type 2 diabetes and its causes

Typically, the body tightly regulates glucose concentration in the blood through the opposing actions of two pancreatic hormones, insulin and glucagon. These hormones control whether glucose in the body circulates freely in the blood (promoted by glucagon) or is stored in the liver, muscles, and fats for later use (promoted by insulin). People with type 2 diabetes cannot reduce their high blood sugar levels to a normal, healthy range because their bodies respond poorly to insulin. This condition is called insulin resistance.

While studies are ongoing, researchers think that physical inactivity, being overweight, and excessive abdominal fat are major contributors to insulin resistance. Obesity may cause the liver to start producing an enzyme that leads to chronic, long-term inflammation in abdominal fat. Eventually, this causes a complex biochemical process that leads to insulin resistance and possibly type 2 diabetes.

This infographic shows how glucose enters the bloodstream and is regulated by insulin. People who cannot regulate their blood glucose levels properly may develop type 2 diabetes. Infographic created in Canva by Diane Fisher and Michael Limmena (Canva Content Licence)

Throughout Canada’s history, Black Canadians have faced prejudice, discrimination, and racism in all aspects of their daily lives. According to the Government of Canada, between 2012 and 2016, Black Canadians were more likely to be unemployed, live in low-income housing, and experience moderate or severe household food insecurity than White Canadians. While some think these differences are due to personal choices, the fact is that these patterns can be traced back to the centuries-old systemic racist policies of the Canadian government.

Before slavery was abolished in Canada in 1834, Black enslaved peoples were dehumanized and deprived of their human rights and education. Forced to live and work under inhumane conditions, they were often subjected to cruel treatment and punishment.

Even after 1834, segregation and many other historically racist policies limited them to poor housing, poor education, and low-wage employment. Although the worst of these policies no longer exist, Black Canadians still regularly experience racism in their daily lives. A 2021 survey revealed that about 7 in 10 Black Canadians experienced racism on a regular or occasional basis. Unfortunately, this article cannot cover the list of historical injustices and the rich history of the Black Canadian community. You can find more information about Black Canadian history through the Canadian Encyclopedia, the Government of Canada, and many other sources. 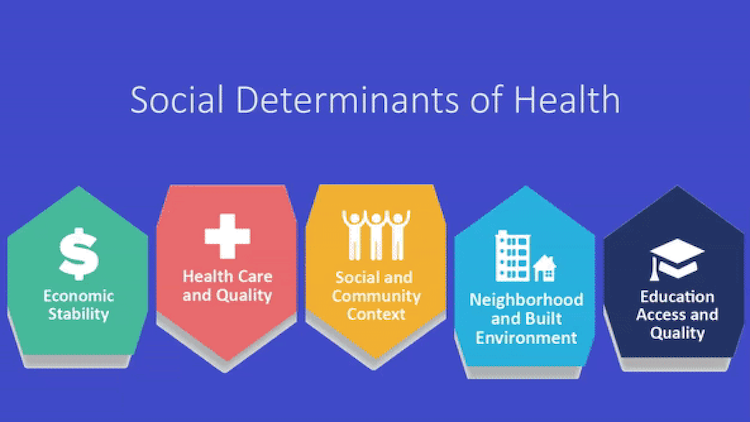 There are a number of social determinants that influence a person’s health. Image: Skbanergt CC-BY-SA

Although examining type 2 diabetes as a biological problem is undeniably valuable, this point of view ignores a critical element in understanding this health problem. Factors such as race and ethnicity, housing, and level of education influence health considerably more than one would think. These factors, collectively known as social determinants of health, provide a valuable framework for understanding racial disparities in health.

Over the years, researchers have identified several key social determinants that contribute to type 2 diabetes. These include the individual’s level of education, household income, and occupation. Studies show that higher levels of education and household income are associated with lower rates of type 2 diabetes. Research suggests that people with a higher education level better understand how to maintain a healthy lifestyle; those with a higher income can access the necessary resources to do so.

Other studies suggest that people in some occupations are more likely to experience diabetes than others. Researchers found that people in low-income occupations, such as motor vehicle drivers or manufacturing workers, were more likely to be overweight and smoke cigarettes. Black Canadians generally report lower levels of education and income than White Canadians; this may partially explain the disparity in the distribution of type 2 diabetes.

While sociological research shows that social determinants are associated with type 2 diabetes, it does not demonstrate that they cause it. However, more recent medical and genetic research suggests that chronic stress may cause changes in gene regulation that lead to a higher risk of developing further health complications, including diabetes. (See my post How intergenerational trauma affects Indigenous communities and this Diabetes Spectrum journal article.)

Despite a lack of general health data on Black Canadian communities, it would be no surprise if systemic racism against Black Canadians played a significant role in explaining the health disparities between Black and White Canadians. 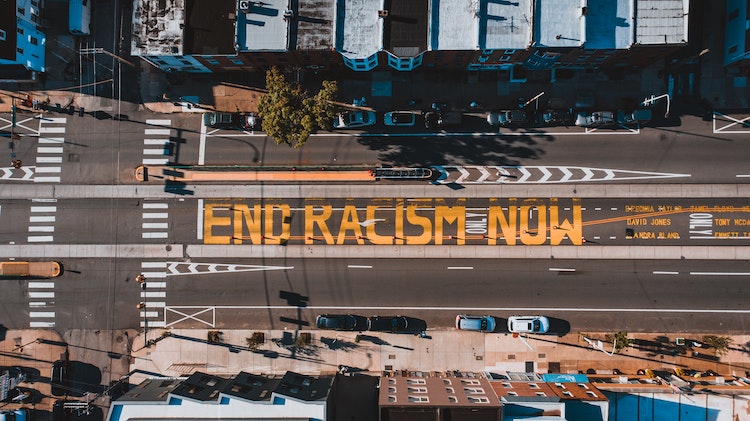 Since the Black Lives Matter movement began, Canada has seen an increasing number of protests and movements advocating for the end of systemic racism. Image: Kelly L, Pexels

Canada does not have an extensive history of collecting race-based data. This lack of data makes addressing the health problems affecting Black Canadian communities difficult. However, organizations, research centres, and increased protests have raised awareness of the racial disparities between Black and White Canadians.

For example, the Black Health Alliance and the Interdisciplinary Centre for Black Health are taking significant steps to collect more race-based data and improve the health of Black Canadian communities through advocacy and research. Many other organizations provide services and information to support Black Canadians and educate the rest of the country about these communities.

Ending systemic racism in Canada won’t be achieved overnight. Researchers are uncovering and documenting the health effects of racism on Black Canadians, and Black communities are organizing to raise awareness of their plight and seek remedies. The rest of Canada must acknowledge racism in our country and help our fellow Canadians bring it to an end.

Feature image: Sugary foods, a glucometer, and diabetes medications are all part of the diabetes ecosystem. Image: Natalia Vaitkevich, Pexels