Disclaimer: Both Alina and Tanya are fans of both cats and wildlife. This post is not intended to alienate any outdoor cat owners. The intention is to demonstrate the effects these animals have on wildlife.

You open your door to find a crime scene. There it lies, bloody and lifeless on your doorstep. A mouse, a bird, a lizard, a frog…. Who is today’s victim? More importantly, who left it there?

Chances are that it was a present from your beloved kitty. Felidae is a family of mammals that includes all the cat species. This large group of mammals includes wild cats such as tigers, ocelots, and lions, as well as domesticated house cats. All species of cats are obligate carnivores, meaning that they must eat meat to meet their nutritional needs. Even though they can eat small amounts of vegetative matter, they lack the physiology to subsist on a vegetarian or even an omnivorous diet. In fact, cats throw up when they eat too much vegetative matter because they lack the necessary enzymes to digest it â€“ something that most cat owners are well acquainted with.

The first cat-like species came into existence around 50 to 35 million years ago as part of the Feliformia suborder. The cats that we see today are the product of adaptions to the environmental and physical challenges those animals faced over those tens of millions of years. All the cats have one thing in common â€“ they are highly skilled hunters.

Our house cats are adapted to eating small amounts throughout the day. That is why they are always looking for opportunities to hunt. So, although your kitty is well fed, its hunting instinct drives it to hunt and kill whenever an opportunity presents itself, whether the cat is hungry or not. And cats are indiscriminate killers, not limiting themselves to introduced or pest species. As a result, their hunting behaviour is threatening native birds and other wildlife on an alarming scale.

Cat owners would like to think that the culprits are only feral cats â€“ the ones that must hunt to survive. But, cats that venture outdoors regularly are more likely to contribute to an ecological disaster. Although they bring us immense joy and love, and help us reduce stress and control pests, they play an important role in causing harm to the environment. They can kill vulnerable migratory songbirds that are protected under a Canadaâ€“US convention, as well as local wildlife like native birds, lizards, amphibians, and small rodents. 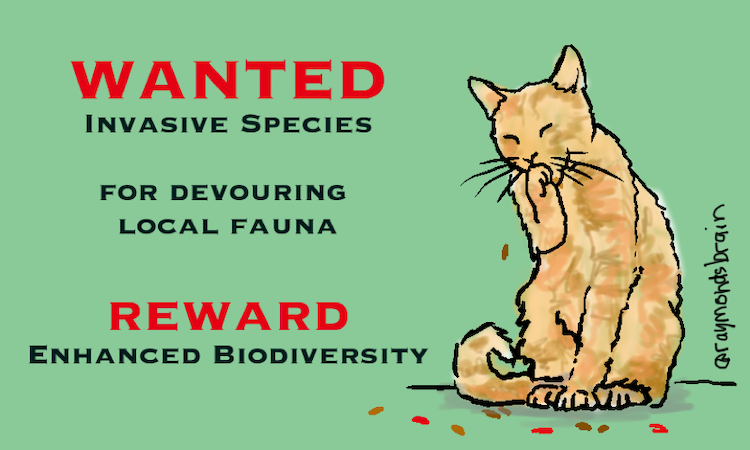 How can our domestic cats possibly be so devastating to native and migratory animal species? On average, pet cats kill an estimated 3.5 animals per month. But the key to their impact on wildlife may be related to their population density. Just think about how many cats you may see along your city block. On Alina’s block in Victoria, B.C., there are six cats that she sees regularly besides her own three kitties â€“ that’s a total of nine cats on her block. Within Victoria alone, there are an estimated 828 city blocks, and assuming Alina’s block is representative of the total cats per block, then there are 7,452 cats living in Victoria proper. It would be hard to estimate how many of those cats spend any time outside, but assuming that half of them do, that would result in over 13,000 prey items killed each month! But greater Victoria is made up of 12 additional municipalities, so the total cat population is much higher in the region. In fact, in 2020 there were 8.1 million pet cats across Canada. Suddenly it’s clear how having a little predator in your home could be unleashing an unexpected ecological disaster upon wildlife across the country.

Although outdoor pet cats in North America hunt much less than their feral counterparts (because they are well fed), it is estimated that they are responsible for the deaths of 10 to 30 billion wild animals per year. Research from the North Carolina Museum of Natural Sciences and its partners found that house cats have a two to ten times larger impact on wildlife than wild predators (excluding feral cats) because of their total number and population density. By contrast, wild cats have much lower total populations and are spread over larger areas. 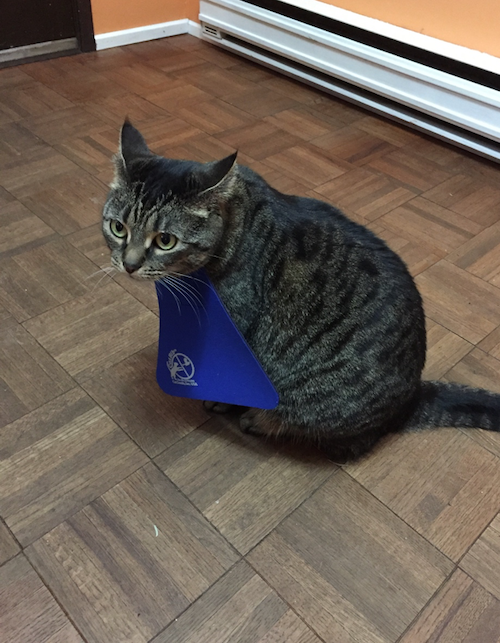 Maggie modelling the CatBib, which trips up cats while trying to hunt outdoors, preventing the killing of birds and other wildlife. It’s just one of many options that can help keep wildlife safe. Photo courtesy of Alina Fisher.

What can be done? Conservationists suggest the best solution is to keep the cats indoors. Kitty might not like that option if she has enjoyed roaming freely in the past, but keeping your cats indoors minimizes their risk of getting sick, or being killed or injured themselves. Indeed, research shows that indoor cats tend to live longer because they avoid fights and other outdoor pitfalls and their owners can monitor their health more closely.

But if you decide that kitty just needs to have her outdoor exercise and enjoy basking in the sun, there are quite a few potential options that can help keep birds and wildlife safe. These include using bell collars, bibs, and brightly coloured collars, easing the hunting instincts through play, creating outdoor enclosures, keeping your cat leashed, and supervising them while they’re outdoors. With these options you won’t have to wake up to a crime scene on your doorstep.