Tracing your roots is all the rage these days, and if humans can do it, why can’t organizations follow suit? As Genome Alberta continues to evolve, a glimpse of its past may say a lot about where it is today and what the future holds.

The history of Genome Alberta starts with the creation of Genome Canada in 2000, which was tasked with forging international leadership in genomics research for the country via regional genome centres.

“At first, it was felt that Prairie interests were best represented by combining Alberta, Saskatchewan, and Manitoba,” says Genome Alberta’s Chief Scientific Officer Dr. Gijs van Rooijen. “It soon became clear that the priorities of the three provinces differed, especially in the early 2000s when Alberta was an energy powerhouse.”

As a result, the Government of Alberta felt their interests were better served by a dedicated genome centre like those in Ontario, Quebec, and British Columbia. What followed was a cost-sharing agreement between Alberta and Genome Canada, and, ultimately, the birth of Genome Alberta in 2005. 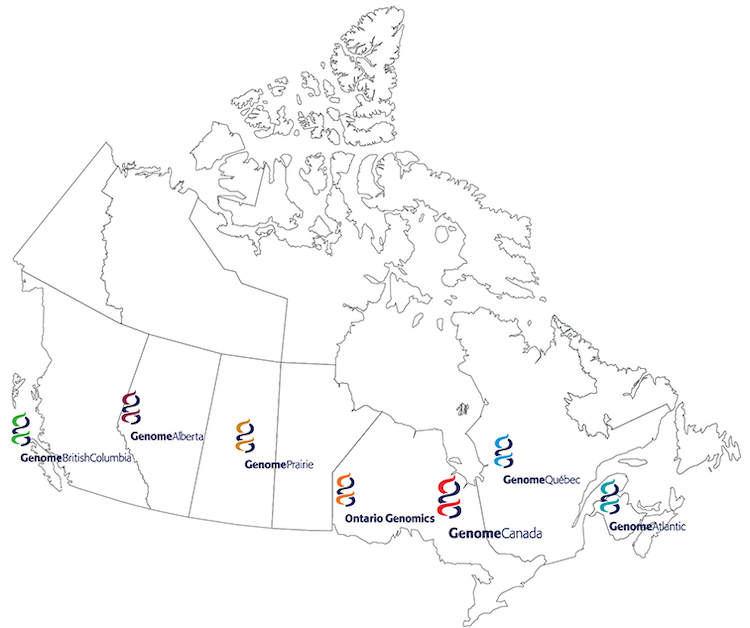 “From a historic perspective, Genome Prairie was best positioned to advance the agriculture sector in terms of genomic capacity,” van Rooijen says. “At the same time, Alberta is so much more than agriculture. We have a large energy sector, and we have significant investments in health research and building greater capacity in the medical sector. We know that relying on one sector of the economy for most of our GDP is a risky proposition. Creating Genome Alberta was a statement that we could compete in other sectors just like Ontario and Quebec do, and I think we have demonstrated that we can.”

Genome Alberta was also integral to the province’s Life Sciences Strategy, which was released in 2004, because knowledge of genetics was a key driver in advancing other areas of the strategy.

“Our organization strengthened the strategy by ensuring we were taking advantage of incredible advances in genomics to drive the strategy forward,” van Rooijen says. “We needed to integrate breakthroughs like the Human Genome Project announced in 2001 and find opportunities to incorporate newfound knowledge into the strategy. Genome Alberta became the most appropriate vehicle to do that.”

As its own entity, Genome Alberta now operates like other genome centres. Genome Canada remains its largest funding partner, but the regional centre must secure investment from its provincial government and industry partners within the region. Centres thus work closely with their provinces to understand the priorities that will guide their research focus going forward.

A good portion of that work is undertaken by Dr. David Bailey, the first permanent CEO of Genome Alberta. A geneticist by training, Bailey was intrigued by the application of genomic principles and tools and jumped at this ground-floor opportunity.

“It’s exciting to see the impact of genomics in providing solutions to so many areas, whether it be in livestock, crops, health, or forestry,” Bailey says.

Genome Alberta even initiated the first national project in Canada around energy and genomics, a legacy to the vision and leadership needed in those early years.

“There is a lot of microbial activity in oil and gas operations that affect them either positively or negatively,” says van Rooijen. “This includes things like microbial-influenced corrosion and the microbes responsible for methane production. It’s critical that we use genomic tools to help the energy industry enhance environmental performance and mitigate the negative impact of microbes.”

Since assuming his role, Bailey has been working with interested parties and stakeholders on priority topics, using genomic tools to tease out solutions to their specific problems. For example, when a recall of 1,500 beef products occurred in 2012 based on meat processed at a plant in Brooks, Alberta, Genome Alberta got involved by using genomic tools to rapidly detect pathogenic E. coli.

“We were very successful in identifying a number of pathogenic bacteria, and we did it with academic partners that developed technology that was cheap and fast,” Bailey says. “This was a great demonstration of how genomics can have a rapid and positive impact on issues of national importance.”

Such projects also enabled Genome Alberta to train postdoc researchers, many of whom were hired by companies and became part of their research and development programs. As these researchers incorporated new genomic tools, they were instrumental in boosting Canada’s ranking to number three in the world for use of genomic technology.

“It was the foresight and early investment by federal and provincial governments in this technology that allowed us to achieve that impressive ranking,” Bailey says.

Of course, the evolution of Genome Alberta is not without its challenges.

“New technology always comes with uncertainties and a lack of information,” Bailey says. “You start with a theory and must get early adopters to invest, which takes credibility and trust in the people doing the research. We have created great teams and have demonstrated that our applications have a real, lasting, and meaningful impact on society. As we have developed new tools, we’ve seen an almost-endless suite of applications across all sectors. Ultimately, we want to create new companies and jobs for Alberta and Canada, and this technology is helping us do that. Companies start out small, but many have grown and been bought out by others across the country based on investments in genomics, so our footprint is considerable.”