The brain is thought to be the most complex organ in the human body, involved in every minutia of our daily lives.

Throughout history, people have worked to describe and decipher this powerful organ, and researcher Alan Evans is no different.

Evans, a global authority on brain imaging and modelling, is a recipient of the 2020 national Killam Prize for his pioneering contributions to neuroimaging. Ranked the sixth most influential brain scientist of the modern era by an artificial intelligence– (AI–) based tool, Evans has been in the top one per cent of highly cited neuroscience researchers since 2014.

But his genuine passion for understanding the brain, enthusiasm for scientific inquiry, and support of colleagues and trainees shine brighter than any formal accolade.

Originally from Wales, Evans has been fascinated by the brain since childhood.

“I distinctly remember reading about memory in Scientific American at eight years old and being absolutely amazed, as I am to this day, by how memory works. How is it you can remember things from 20 years ago in crystal clear detail at the same time as yesterday’s shopping list? Your brain is full of trillions of memories, but how are they stored? How are they recalled? I suppose I gravitated to a field where memory is a central question. Not to mention, I also get to work alongside my hero, Dr. Brenda Milner, who built a career on memory!”

Alan Evans in his office at McGill University explaining a figure from his doctoral thesis on protein crystallography (left) and holding his Glass Brain award for lifetime achievement from the international Organization for Human Brain Mapping (OHBM) in 2019 (right). Evans is a co-founder of OHBM. Images used with permission from Alan Evans

An interdisciplinary exploration of the brain

Evans, a professor of Neurology and Neurosurgery, Psychiatry, and Biomedical Engineering at McGill University, has been conducting research at the Montreal Neurological Institute–Hospital, known as “The Neuro,” since 1984. He currently leads the McGill Centre for Integrative Neuroscience, which conducts computational brain research using mathematical and statistical approaches. The centre’s research activities are diverse and include projects focussing on Alzheimer’s disease, autism disorder, neuroimaging methods (such as MRI), and technologies to help manage and process data, including visualization tools.

Like the research in his lab, Evans’ background is interdisciplinary.

“My training was in physics, medical physics, and then protein crystallography, so I have always straddled a lot of different backgrounds,” he says. “As science becomes more interdisciplinary, it requires people with different skillsets to collaborate. I’ve built my career and lab like that. We have mathematicians, statisticians, computer scientists, psychiatrists, psychologists, neurologists, and they all work together. Somebody must straddle all these scientific domains and pull it together. To some extent, I see a recognition like the Killam Prize late in my career as a validation [that this approach] was the right thing to do.”

If asked, Evans says he sees himself as a computational neuroscientist.

“Computational neuroscience looks at the models and algorithm development that explain brain machinery, while I would define neuroinformatics largely as the IT aspects in databasing and high-performance computing (HPC). You have these two worlds, and one supports the other.”

He says that when he was studying, “There was a sense that engineers and physicists just made machines work and didn’t think of larger scientific questions which, in my case, are about how the brain works or doesn’t work in disease. In computational neuroscience, [we use] powerful computing infrastructures…to pull together data from different settings, whether it be imaging, genetics, psychology, behaviour, and increasingly, social contexts. All of these metrics were different disciplines and now we’re pulling them together into sophisticated computational models of the brain.”

Brain atlases, which provide standardized spatial references to navigate and analyze brain information, are vital in neuroscience research, education, and clinical applications. The BigBrain project, a collaborative effort between Evans and European colleagues, is the first freely accessible, microscopic-resolution 3D atlas of the human brain. Now an international industry standard, BigBrain was recognized by the renowned MIT Technology Review as a top-10 breakthrough in 2014.

“BigBrain was a labour of love,” Evans says. “We never thought it would take so long or have this much impact.”

A technical landmark, BigBrain required years of meticulous lab and computing efforts, starting with the sectioning of a donated brain into over 7000 slices, each thinner than a strand of hair. Stained sections were then imaged using a flatbed scanner; however, most slices had artifacts, tears, and distortions that had to be painstakingly corrected before digitally stitching them all back together into a coherent 3D dataset.

Histological processing of the donor brain used in the BigBrain Project. The brain being sectioned into thin 20-micrometre slices using a tool called a microtome (left). Stained sections before being digitized with a flatbed scanner creating a one-terabyte record (right). The donor brain was obtained in accordance with the ethical requirements of the University of Dusseldorf. Images used with permission from Dr. Katrin Amunts

Evans emphasizes the benefit of the high-resolution atlas: “Individual pixels of MRI images of the brain are about 1000 micrometres in size, and can become blocky and unreadable when you zoom in. On the other end of the spectrum is digital histology, where you take a picture of some tiny piece of brain tissue at a one-micrometre resolution, which is usually 2D. BigBrain sits somewhere in the middle at 20 micrometres, so 50 times smaller than MRI in all three dimensions. The finer you get, the more you can model subtle aspects of brain function.”

Like the explosion of detail you get when switching from the aerial view in Google Maps to `street view’, BigBrain lets the user zoom in and explore different parts of a 3D brain at a near-cellular level. 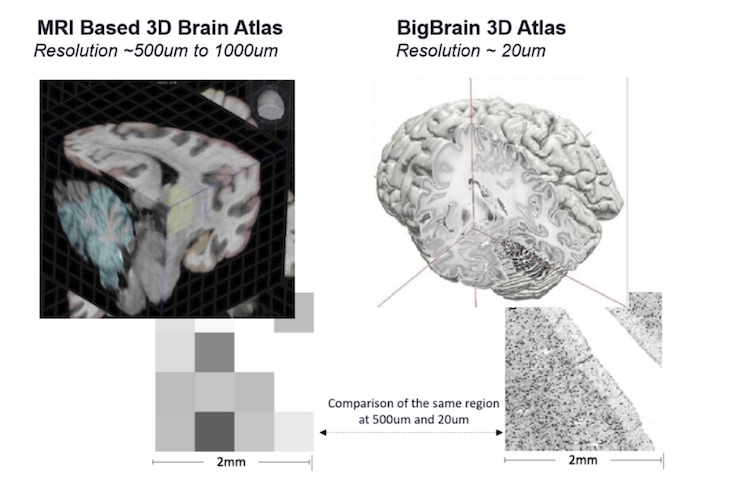 Even people with untrained eyes can appreciate the ultra-high resolution of BigBrain (right) versus an MRI based 3D brain atlas (left) in this illustration. The detail in the zoomed-in inset of BigBrain (lower right) is significantly clearer than the pixellated MRI image (lower left) for the same section of the brain. Images used with permission from Alan Evans

The global success of BigBrain has recently laid the groundwork for the next generation of 3D brain models. Launched just this summer, HIBALL (Helmholtz International BigBrain Analytics Learning Laboratory) aims to create a Google Earth-like system for the human brain by leveraging AI and HPC to model the brain at an unprecedented scale.

“We can design the algorithms far before the computing infrastructure is ready to accommodate them,” he says. “Conceptually, the mathematics and modelling are similar, so we are designing these algorithms now… and the computing will catch up. Computing will be infinitely more powerful 10 years from now. Moore’s law isn’t changing.”

A realistic model of a working brain?

In the future, Evans envisions that brain-inspired artificial intelligence (BIAI) will help us achieve a realistic working model of the human brain. He notes, “On its own, AI is often used to describe pattern recognition. That is, if I show you an image, you can use AI to identify patterns in large datasets that humans couldn’t…a glorified classification problem.”

But, he says, “BIAI is more about attempting to reproduce human behaviour within our neural networks and artificial models, so we have a model of connectivity of how different parts of the brain talk to each other! A working brain we can interfere with, model disease and neurodevelopment and neurodegeneration with…to understand how the brain works beyond just [being] descriptive is needed. Describing is not enough! You have to put information into a model that works like a real human brain does.”

A 3D visualization of BigBrain using a program called Atelier3D (left). Alan Evans at The Neuro in front of BigBrain data displayed on a large screen (right). Images used with permission from Alan Evans

What does Evans hope a realistic model of a working brain will achieve? “Maybe model human memory… I hope and intend to be around for that,” he says.

He has no plans to retire “cold-turkey” and remains actively engaged in a range of leading-edge initiatives and research. As he reflects on the journey so far, he notes that “all the pain and anguish we went through, breaking stuff out from departments like radiology and clinical neurology into its own scientific discipline and now being able to watch it grow, watch the younger scientists grow… well, it makes you feel like it was all worth it.”

Quotes have been edited for length and clarity.

One thought on “The interdisciplinary path to modelling the brain: A talk with neuroscientist Alan Evans”