By Christine Thou, Environmental Sciences editor

In December 2019, residents of the Isle of Harris in Scotland found a dead sperm whale washed up on a beach. The whale died after ingesting 220 pounds of plastic that had been carelessly discarded into the ocean. Over the last 60 years, plastic products have been used to facilitate modern living, and plastic pollution has become a significant by-product of this modern living. Plastic pollution has a long-term presence in the environment as it is an incredibly durable material that requires hundreds of years to decompose. This is especially problematic for animals that encounter and ingest plastics believing they have found food. 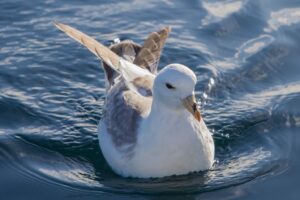 The Northern Fulmar, a common indicator species for assessing the impact of plastic pollution on wildlife. Image from Wikipedia Commons, CCO.

Dr. Jennifer Provencher, a toxicologist with the Canadian Wildlife Service, studies the negative impacts plastics have on wildlife and explains her findings to policymakers to help develop environmental regulations. A large portion of her work involves collaborating with international communities concerning indicator species, such as the Northern Fulmar, that can be used to measure the impact of plastic pollution.

Provencher says that plastic pollution is a complex problem and that “we need all the different suites of people such as the wildlife biologists, economists, nanoparticle specialists, material scientists, analytical chemists, etc., to be brought on board to effectively inform policy experts how to best … tackle this issue.”

Hotspots for plastics and their impact on animals

In the ocean, global circulation patterns cause high concentrations of plastic to gather in spots known as gyres. There are 5 gyres in the world, each associated with the major ocean currents.

“Global circulation patterns have a lot to do with the Coriolis force, the movement of the planet and the temperature. It’s all about biological and physical oceanography that drives how water moves through the oceans and where plastics are going to accumulate,” explains Provencher. She also notes that species living in the general area of these gyres are among those most significantly impacted by plastic pollution. 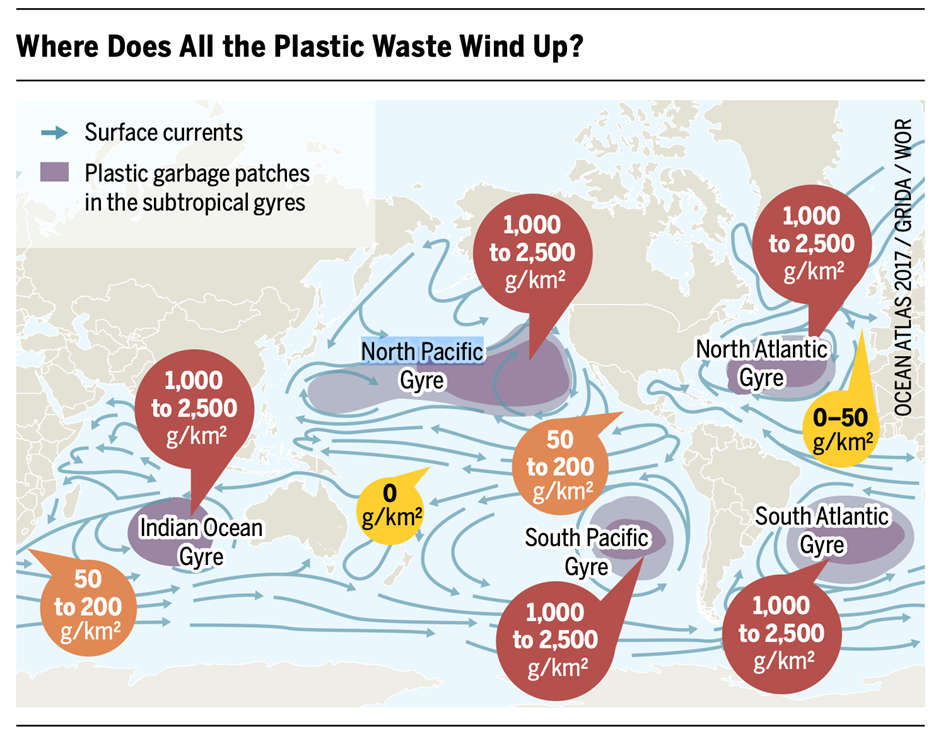 Dr. Provencher tends to focus on species throughout the Arctic, North Pacific, and Canada. Asked which animal species are most affected by plastic pollution, Provencher says, “It depends on what part of the world you’re in. I think in terms of the population level, it probably is the Albatross in the North Pacific. So those animals are very highly exposed to plastic pollution.”

Whales, such as the sperm whale on the Isle of Harris, are most impacted by big plastic like fishing gear, as they are more likely than other animals to consume bigger plastic whole. Their population levels are so low that when an individual animal dies, the effects are felt throughout the species.

However, big plastics aren’t the only concern. Research on plastic pollution has started to examine the effects of small pieces of plastic, called microplastics. Dr. Provencher reports that “Not a lot of studies have actually been able to show population-level impacts from microplastics, a relatively new study area. [It’s] only in the last 10 years where we’ve had abundant science done on microplastics. Before then it was at a very, very low level.”

Microplastics are pieces of plastic smaller than 5 millimeters long, usually the result of larger plastic waste being broken down into smaller pieces by UV rays (photolysis).

According to Dr. Provencher, there are two ways to think about microplastics: physically and chemically. From the physical perspective, animals who ingest microplastics can damage their gastrointestinal tracts. These small pieces of plastic fill up their stomachs and stretch mechanical sensors, which signal their brains to give a false sense of satiation. This causes animals to eat less or stop eating, so they may die from malnutrition. Pieces of plastic can also embed in their stomach linings, leading to inflammation and other health issues. This affliction has been increasing in some bird species.

The chemicals added to plastics also pose a problem. Plastic is made from petroleum, and other chemicals are added to make it flexible, soft, coloured, or UV-resistant. Provencher notes that “There are all kinds of chemicals added to [the plastic]. Some of those chemicals are bound to the polymer. A growing number of studies have demonstrated that acid digestion from the stomach can liberate the chemicals off the surfaces of the plastic and [they] can migrate to other parts of the animal’s body.”

Research has shown that these chemicals interact with biological processes such as hormone homeostasis and the maintenance of the immune system in ways that can be detrimental. Therefore, we must consider both physical and chemical factors when assessing the effects of plastics on organism health.

As animals mistake plastics and microplastics for food and ingest them, plastics have started to make their way up the food chain. Numerous studies have monitored fish species like tuna and shown that they have low amounts of plastics in their digestive systems. Other ocean species, such as plankton, herring, and sardines, have higher levels of plastics.

Provencher says that plastics in fish are not a human health concern because the plastic goes to the fish’s stomach, which most people do not consume. However, the plastic in animal species such as bivalves, clams, mussels, shrimp, and prawns, which people tend to eat whole, could pose a human health hazard. Traces of microplastics have been found in both animal and human feces. More research is required to determine if humans are directly ingesting the plastics or if the plastic is moving up the food chain.

In addition to the physical impacts of plastic moving up the food chain, a major concern is the many additives used to manufacture plastics that have proven to be hazardous to human health. Among these chemicals, bisphenol A and phthalates are commonly used in the production of food packaging and have also been found to disrupt the human endocrine system. These endocrine-disrupting chemicals interfere with how organs function in response to hormones. Their effects manifest through their ability to mimic hormones, antagonize their action, alter their pattern of synthesis, and modify the expressions of receptors. Research has shown that high exposure to endocrine-disrupting chemicals is associated with increased instances of hormonal cancers, infertility, metabolic disorders and neurodevelopmental disorders.

What can be done to lower plastic pollution?

Consumerism is one of the driving forces putting plastic in the environment. Plastic is not something people can just throw away and forget. It creates a series of problems that have lasting effects on the environment, and those effects can cycle back to humans one day. Plastic pollution is an intricate dilemma that requires an interdisciplinary team to consider all the potential outcomes to best determine an optimal solution.

For example, the Government of Canada has proposed to ban single-use plastic items such as straws, stir sticks, and plastic bags to achieve the goal of zero plastic waste by 2030. Many single-use plastic products such as straws and utensils can be replaced with reusable alternatives, but we must consider whether this would have an overall positive environmental impact. According to a Danish study, producing a single-use plastic bag requires very little energy and emits negligible carbon dioxide emissions compared to a reusable cotton bag. For the cotton bag to have a lower overall environmental impact, it would have to be reused over 7000 times. Everything we do has an impact, and it is difficult to find sustainable yet impactful solutions that follow the available data.

Provencher says that plastic is not all bad—it has its uses. For example, plastic food packaging can extend the shelf-life of perishable foods, thereby decreasing food waste, which is a significant problem in much of the world. On average, one third of the world’s food supply is discarded. Often, plastic packaging is the only solution available to decrease this waste.

Provencher concludes, “You can make that choice as a consumer every single day. What you’re using, what you’re getting at the store. [Thinking] critically about what you’re purchasing will give you control over your plastic output.” This goes back to a familiar adage: reuse, reduce, and recycle. Our focus should be on the intelligent use of plastics and closing their life cycles.

One thought on “The rising concern about plastic pollution: imminent consequences and possible solutions”