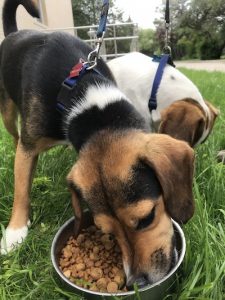 Chowing down on kibble.
Photo by Sydney Murray

Most pet owners want nothing but the best for their furry mates. They go to great lengths to make sure their pets are living happy and healthy lives.

But good intentions do not always protect pets from unknown ingredients in pet food. Acrylamide is a particularly nasty chemical commonly found in many commercial dry pet foods. Little is known about the chemical, and few studies have investigated what consuming it does to animals.

However, a team of researchers at the Western College of Veterinary Medicine at the University of Saskatchewan is seeking to change this. They’re investigating the effects of acrylamide toxicity, and some microscopic worms called Caenorhabditis elegans are helping them out. 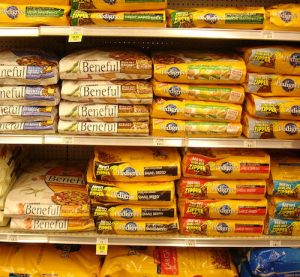 When carbohydrate-rich foods, such as dried pet food, experience high temperatures, it often triggers chemical reactions that result in small amounts of acrylamide.

The process of making commercial dog and cat food involves cooking it at high temperatures. When carbohydrate-rich foods experience high temperatures, it often triggers chemical reactions that result in small amounts of acrylamide. Acrylamide is a highly reactive chemical.

When it is eaten, it binds with anything it possibly can, including cells and even DNA.

It also tends to accumulate within the body. This creates a potential hazard for animals or humans that eat foods containing trace amounts of acrylamide. Pets in particular often eat the same dry-food diet throughout their lives and are thus exposed to acrylamide daily. 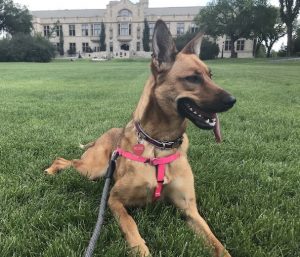 Rosie, a German Shepard mix, enjoying some sun on the grounds at the University of Saskatchewan. Photo by Sydney Murray

Since 2002, the toxic effects of acrylamide have been recognized and regulations have been changed to in hopes to decrease the level of acrylamide exposure for humans. The U.S. Food and Drug Administration currently estimates people in the U.S. consume approximately 21â€“60 micrograms (mean amount) of acrylamide every day from their diet. In comparison, a 2013 study found acrylamide levels between 106â€“358 micrograms per kilogram of kibble in five different brands of dry dog food â€“ levels considerably higher than some of the ‘recommended levels’ for human infants. Although these measures are in micrograms â€“ a considerably small amount â€“ they nonetheless warrant concern.

Although we know that acrylamide is toxic, we do not understand the sequence of events that occur in the body when it is consumed. Studies with rodents have shown that the chemical can cause both cancer and brain damage when ingested. But exactly how the brain is damaged by the chemical is unclear.

The truth about dogs and cats … and Caenorhabditis elegans

Dr. Michael Wu, a scientist at the WCVM, is attempting to better understand the consequences of acrylamide consumption. He and his research team have been studying acrylamide toxicity in an organism which at first glance seems an unlikely model for human beings, cats, and dogs. 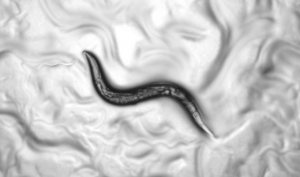 They’re investigating the effects of acrylamide toxicity, and some microscopic worms called Caenorhabditis elegans are helping them out. Photo by Sydney Murray

“People hear ‘worms’ and they think of the soil worms that they have in their garden, but [C. elegans] are very different than the traditional worms,” says Dr. Wu. For example, C. elegans have a lot more in common with humans and pets than garden-variety worms do. “Within the C. elegans genome and the genes that encode different proteins, about 40 to 60 per cent are homologous in humans” Wu says. “We essentially have the same functions of genes as these worms.”

This similarity makes the worms good candidates for investigating how acrylamide damages the brain. The worm models can also indicate the likeliness of similar damage in pets when exposed to acrylamide. In addition, C. elegans do not feel pain during exposure and testing as they do not have pain receptors, which makes worm trials humane.

Neurotoxicity refers to damage that occurs in the brain as a result of exposure to a toxin or poison. In the case of acrylamide, toxicity is more specific than initially thought. Acrylamide toxicity in the C. elegans brain refers to the specific neurons and pathways of damage. Because the way in which the chemical damages the brain is unclear, Wu’s team has been exposing C. elegans to varying concentrations of acrylamide to determine what happens to the worm’s neurons during exposure.

Neurons are specialized brain cells that send signals allowing for communication between the brain and the body. Without neurons, movement and cognition would not occur. The genetic similarity between worms, dogs and cats means their neurons are very similar, and it is the main reason why testing on worms is so helpful to understand what occurs when pets ingest acrylamide.

The experiments undertaken by Wu and the WCVM team have allowed them to determine that acrylamide damages dopamine neurons, which are responsible for movement, in particular. These neurons are severely damaged by acrylamide exposure in C. elegans.

Next steps… for pet owners and for research

What does this research mean for pet owners and their furry friends? The trick, Wu says, is to not avoid dog kibble altogether, but to understand that long-term consumption of dry pet food brings with it the risk of possible neurological damage to your four-legged companions. “There is no reason to be alarmed, but it is good to understand the risks: in particular, accumulation over long periods of consumption.”

Pet owners can decrease the risk is by switching up their pet’s diet every so often and incorporating raw food when necessary. A varied diet can reduce the amounts of acrylamide ingested, thus reducing exposure and risk. If owners feel the risk to their beloved pets is too great, they can also select brands of dry pet food with low starch content.

Pets in particular often eat the same dry-food diet throughout their lives and are thus exposed to acrylamide daily. Photo by Sh4rp_i_CC BY 2.0

Besides the importance to pets, there are implications for human health. Damage to the brain’s dopamine neurons as seen in acrylamide poisoning is also characteristic for the movement disorder in humans that is known as Parkinson’s disease. The studies undertaken by Wu’s team have uncovered a possible link between chronic acrylamide exposure to an increased risk for neurological abnormalites. It is important to understand how exposure over a lifetime can have health implications.

The team hopes to continue their investigation of acrylamide toxicity by testing other types of neurons in C. elegans to see if the chemical affects those as well. C. elegans is such a versatile model, it provides many possibilities for testing and avenues for research in this area.

This tiny worm â€“ so different than its distant cousins in our gardens and so similar to us and our beloved pets in genes and proteins â€“ is helping to pave the way to a better understanding of the consequences of acrylamide exposure. You could say this makes C. elegans a dog’s best friend.

Sydney Murray is a toxicology research student at University of Saskatchewan’s Western College of Veterinary Medicine. She wrote this article as part of Science Borealis’s Pitch and Polish program, one of our New Science Communicators initiatives.