Nowdluk Aqpik of Kimmirut, Baffin Island was riding in an ATV one afternoon when he spotted a blue gleam out of the corner of his eye. He stopped the vehicle, got out, and examined a rock. He went home and told his brother, Seemeega Aqpik, about his find. They got the rocks tested. Those rocks became the first sapphires identified from Baffin Island.

Unfortunately, someone else had the rights to explore for minerals in the area where the gems were found. But in 2002 this claim expired, and the brothers, with their partner Chris Lloyd of Iqaluit, staked their own claim to the land. They struck a deal with True North Gems that lets the company search for sapphires on that land. They call them Beluga Sapphires.

This story made the news again in 2017 when Canada’s Governor General gave Queen Elizabeth II the Sapphire Jubilee Snowflake Brooch, which is set with Baffin Island sapphires, among other gems.

Last year, researcher Philippe Belley, then a graduate student at the University of British Columbia, and his colleagues happened upon something just as precious (and blue) on Baffin Island – cobalt blue spinel and lapis lazuli.

What is it about this island that’s so conducive to forming precious gems? In order to understand that, we need to understand the chemical makeup of each gem and how they are formed.

Sapphires, spinel, and lazurite: The basics 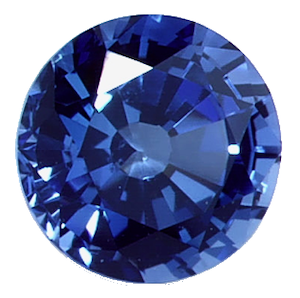 Sapphires are a type of corundum, which is made of aluminum oxide (Al2O3). Pure corundum is colourless, but inclusions or impurities of different compounds or elements in the corundum can produce different optical effects. Like many other crystals, corundum can exhibit phenomena such as asterism, chatoyancy, and the ability to change colour.

Sapphires are classified as gem-quality corundum that isn’t coloured red. Red corundum is known to us as rubies and are a consequence of chromium (Cr) inclusions. To form a classic blue sapphire, the corundum must include iron (Fe) and titanium (Ti) impurities. Blue sapphires can range from deep blue to nearly colourless. 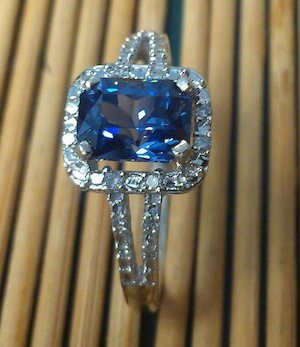 Gem spinel is a magnesium aluminate (MgAl2O4) crystal which has often been mistaken for rubies and sapphires throughout history. They were considered cheap substitutes for sapphires and rubies, but they are now gaining popularity because they’re less likely to be artificially enhanced. Sapphires and rubies are often heat treated and modified to improve their colour and clarity, whereas blue and pink gem spinels are modified less often, allowing collectors to appreciate them for their natural beauty. 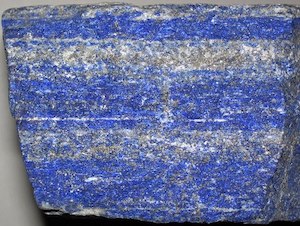 Lapis lazuli, like cobalt blue spinel, is a semi-precious gem. It is not a mineral but a rock that contains lazurite, calcite, and pyrite, among other minerals. It also has a long history. Lapis lazuli from Afghanistan was used to decorate jewelry and furnishings by the ancient Egyptians. In the 14th and 15th centuries, Italian painters ground up lapis to make the pigment called ultramarine, the most expensive pigment of the time.

So why Baffin Island?

Corundum, spinel, and lapis lazuli are formed by metamorphic processes: a combination of pressure, heat, and chemical processes that transforms their physical and chemical composition over a long period of time. The pre-metamorphosized rock is called the protolith and, as it turns out, the sapphires, spinel, and lapis lazuli found on Baffin Island all came from similar protoliths.

The metamorphic history of the area and the ratios of certain elements like sulphur (S), sodium (Na), potassium (K), magnesium (Mg), aluminium (Al), and silicon (Si) in the protoliths determined which gem formed or if no gems form at all. It’s like baking. Cookies, brownies, and cake all need flour, sugar, and butter. But the differing ratios of these core ingredients, along with differing additives, how you mix them, and the baking temperature and time, determine what kind of treat you ultimately end up with.

The core ingredients of corundum are aluminium and oxygen. These elements can be found almost anywhere, but despite this, sapphire formation is quite rare. This is because silicon is also an extremely common element and aluminium would rather bond to silicon than oxygen. This means that sapphire is only able to form in areas where silicon is unavailable to bind to.

Favourable conditions for the formation of gem-quality spinel depend in part on factors like the availability of magnesium and a low silica-to-alumina ratio in the protolith. Rock is not homogeneous. The amount of iron and cobalt varies in the protolith across Baffin Island. As a consequence, in some areas of the island, the iron content in the spinel is four times higher than in its surrounding rock. The high iron content produces spinel that is dark in colour and generally less valuable. In other areas of the island, there was at least double the cobalt content in the spinel’s protolith compared to an average protolith of that type. This produces the highly prized cobalt blue spinel.

Both the Baffin Island sapphire and cobalt blue spinel are valuable. By contrast, the lapis lazuli found on Baffin Island is of less interest economically since it’s a less-prized gemstone and the deposits are not of the highest quality due to its high carbonate content. That said, if there are more undiscovered lapis lazuli deposits, they will probably be easily found due to the amount of exposed rock on the island.

So next time you’re outside, take a good look around. That bright, shiny object that you see out of the corner of your eye might be worth a fortune.