Take a moment to imagine a scientist in a chemistry lab. Perhaps they sport a white lab coat, protective glasses, and gloves. Around them, strangely shaped glassware contains different coloured liquids alternately fizzling, glowing and smoking. You hear a whoosh as the hissing gas in a Bunsen burner ignites. There is an ear-shattering boom as a flame is put near a balloon filled with oxygen and hydrogen, and gasses silently tumble out of a vat of liquid nitrogen or a bowl of dry ice. 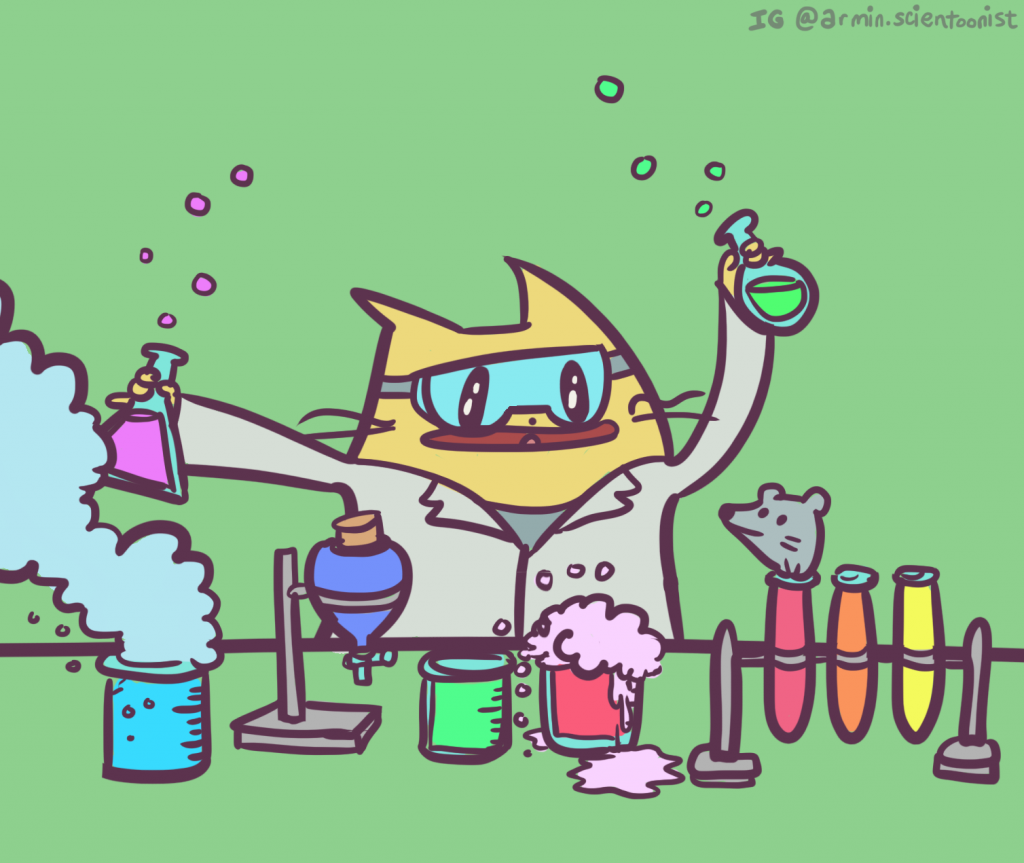 A common, and somewhat exaggerated, perception of chemists. Cartoon by Armin Mortazavi

This depiction is slightly exaggerated. Bangs, fire and vivid colours may be common in chemical magic shows, but these sensory extravaganzas are less prevalent in a research lab. Chemists focus less on the bangs and more on understanding and manipulating the invisible world of chemicals. The visual effects of a chemistry magic show are just theatrical by-products of our interactions with this world.

So how do we study something that is invisible? Scientists use spectroscopy, literally seeing (scopy) with light (spectro) to understand chemicals. Ironically, spectroscopy involves very little seeing and hardly any visible light because chemicals are too small to see even with the world’s most powerful light microscope. Instead, spectroscopy uses types of light invisible to humans such as infrared and ultraviolet to produce information in the form of squiggly lines. 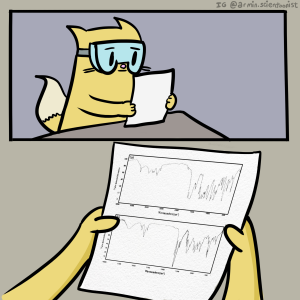 In spectroscopy, scientists interpret many types of squiggly lines to understand the otherwise invisible world of chemistry. Cartoon by Armin Mortazavi

One of the early types of spectroscopy developed in the mid 1800s was infrared (IR) spectroscopy. Infrared spectroscopy works because everything around you is made of vibrating chemicals. While a table may look like a solid hunk of wood, its atoms are constantly in motion. Some atoms dance together with the slow elegance of a waltz while others move with the rapidity and energy of salsa. Infrared spectroscopy analyses an unknown substance by using its unique combination of dance moves to identify the different atomic dancing groups present. 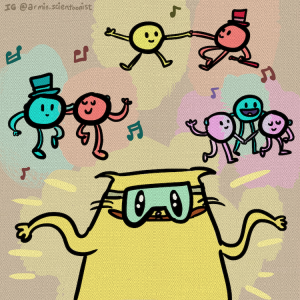 In infrared spectroscopy, chemists identify groups of atoms by the rhythm of their dances (i.e. frequency of vibrations). Cartoon by Armin Mortazavi

A problem with IR spectroscopy is that just as some dances have similar rhythms, some groups of atoms will dance at similar frequencies. The limits of IR spectroscopy encouraged the development of other spectroscopies.

In the early 1900s, scientists developed mass spectrometry, or, as it is affectionately known, mass spec. Mass spec gives us information about chemicals by breaking them apart and looking at the pieces. Imagine you have several different kinds of chocolate bars: the small squares of a Cadbury bar, the long rectangles of a Kit Kat, and the assembled triangles of a Toblerone. When we break a piece of chocolate off each bar, the size and shape of the broken piece will depend on the bar.

The same is true for chemicals. Mass spec breaks apart chemicals using a beam of electrons. And just like we know that Toblerone will break into triangular shapes and a Cadbury bar into little squares, scientists can predict how different chemicals will break too! 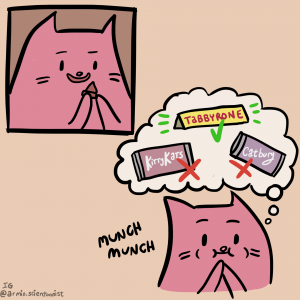 In mass spectrometry, chemists can use the fragmentation pattern of a chemical to identify it. Similarly, just by looking at it, the scicat knows that the triangular chunk of chocolate must be from a Toblerone! Cartoon by Armin Mortazavi

Have you ever been swabbed down at airport security? The small cloth that has passed over your clothes is then placed into a mass spectrometer that quickly breaks apart the chemicals on your clothes and looks for the telltale fracture patterns of prohibited chemicals.

Another, arguably more powerful, spectroscopic method developed in the 1940s is NMR, or nuclear magnetic resonance spectroscopy. The name of this method is very long, but the idea behind it is relatively simple. Imagine you want to describe an image of a beautiful mountain scene. There’s just one problem: you can’t see it. But you do have prior knowledge: there are two forests, four mountains, and one lake. You also know that one forest is in front of the lake while the other is at the base of a mountain. The other mountains are in the distance. Suddenly, just by knowing the number of different types of objects and their proximity to each other, you can start building a picture in your head. 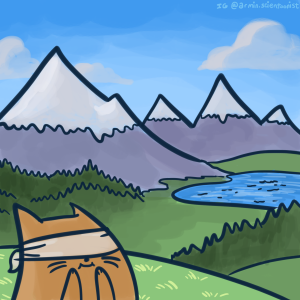 In nuclear magnetic resonance spectroscopy, chemists use information about how close different types of atoms are to one another to paint a picture of a chemical that can’t be seen. Similarly, the scicat can imagine the mountain scene once they know which things are close to each other. Cartoon by Armin Mortazavi

This is what NMR allows chemists to do. This type of spectroscopy uses very large, very powerful magnets to tell us about different groups of atoms present in a chemical. From NMR, we know how many of each type are present, and their relative proximity. Just like the mountains and forests, we can start piecing together a picture of the chemical.

There are many more spectroscopic techniques used to analyse and identify chemicals, and you might wonder why so many are needed. The information gained from each technique is slightly different, and every spectroscopy has its limitations. Mass spectrometry requires the irreversible destruction of the chemical in order to analyse its breaking patterns. The proximity information from NMR can only be used to generate a beautiful landscape if you can confirm the total number of mountains, trees and lakes in the landscape with another method. Even the atomic dances of infrared spectroscopy can be mistakenly identified. It is only by using these techniques together that chemists can generate a clear picture of a world that is too small to see. 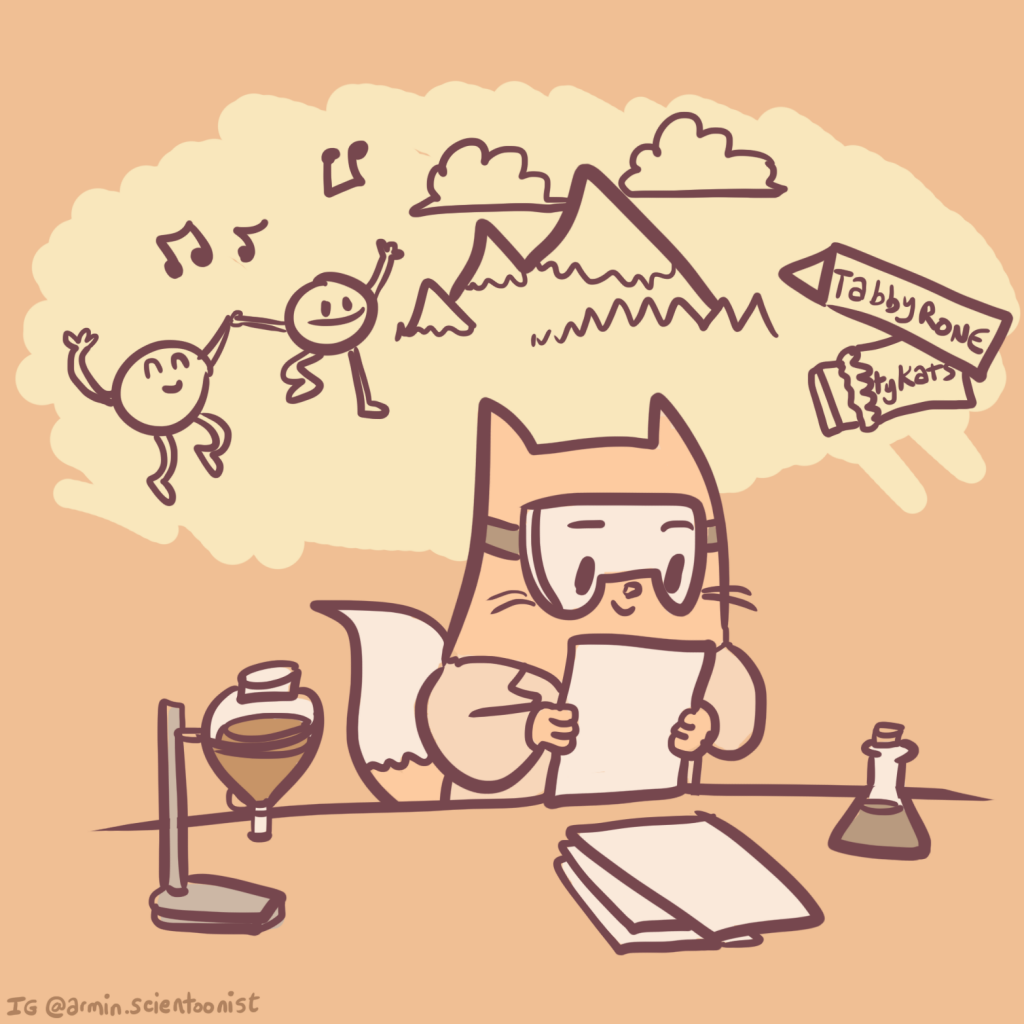 A more accurate depiction of a chemist: many chemists wear lab coats and are often surrounded by funky glassware, but they also constantly use their imaginations to understand the invisible world of chemicals. Cartoon by Armin Mortazavi