August is a time for slowing down: it’s the last month before the kids go back to school, the last month before universities kick into the fall semester, and the last chance for a quick vacation or trip to the cottage. It’s also when many scientists switch from doing fieldwork to lab work, or sitting at a computer analysing data. So to celebrate the summer of 2014, here’s a look at the ups and downs, trials and tribulations, joys and sorrows of fieldwork.

Grad school is a fantastic time to enjoy fieldwork, though the hours can be long and the pressure high. Some schools like Queen’s University are lucky enough to have a field station where students can immerse themselves in nature and science, but these facilities are becoming scarce. As one progresses beyond grad school, whether it’s to an academic career or not, there is often less time available for field work. One example of an academic who makes time for fieldwork is Chris Buddle from McGill University, who has written about some of his adventures in Arctic arthropod ecology.

Fieldwork isn’t just for those studying big charismatic megafauna (like elk or grizzlies) – even small things like the parasites of ants, or viruses, require scientists to get outside to collect data. Even more broadly, fieldwork can be an important part of research fields outside of zoology, botany, and ecology, and includes fields like medicine and earth science. It doesn’t even have to be outside! 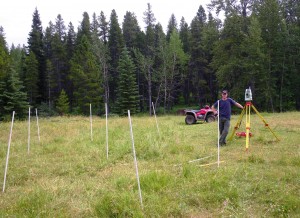 One of my favourite parts of fieldwork is that it’s not always about the science, but about the experience. While increased technology can be challenging, particularly in remote field camps, it can also be an key component of engaging students in fieldwork and connecting them with a worldwide network of experts, as Chris Buddle discovered. Technology in the field can also lead to serendipitous discoveries. 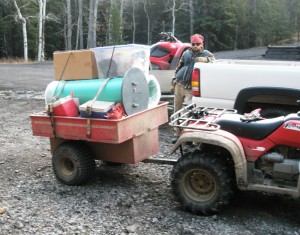 Using new technologies can require hauling a lot of equipment into the field (Photo: S. Boon, used with permission).

In case you were wondering, fieldwork isn’t just about wandering the great wilderness. Challenges appear (northern Saskatchewan muskeg, anyone?), and things don’t always go as planned. That isn’t to say there are no challenges in the lab or in the office, but in the wilds of nature there are often fewer aspects under our control. To keep this in mind, Richard Conniff maintains a sobering summary of those who have lost their lives in the field.

So here’s to another summer of successful fieldwork â€“ be safe, have fun, and do some awesome science!

One thought on “What do scientists do in the summer? Fieldwork!”