by Alex Bond and Kasra Hassani

As our Earth & Environmental Science editors wrote in last week’s editorial post, this year marked the 45th annual celebration of Earth Day. Unfortunately for some, it was overshadowed by the spill of 2800 litres of Bunker C fuel oil in Vancouver’s English Bay. Oil spills like this are one of the most visibly damaging activities to our oceans, but other equally insidious spills are happening around our coastline. 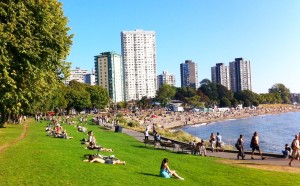 The largest oil spill to date (clocking in at just shy of 1,000,000,000 litres) began 5 years ago at the Deepwater Horizon oil rig in the Gulf of Mexico and – not surprisingly – the effects are still being felt by both the ecosystem and the regional communities. Given our knowledge of other large spills – most notably the 1989 Exxon Valdez disaster in Alaska – it’s clear that it will take decades or longer before the region recovers. When we stop finding oil on our beaches or seeing an oiled bird on shore, we assume the worst is over and carry on, oblivious to the continued and long-lasting effects beneath the waves.

A good example of these long-term effects is the Manolis L. Chances are, most people aren’t familiar with this sordid story.The Manolis L was a cargo vessel carrying paper when it ran aground in the Change Islands of Newfoundland’s Notre Dame Bay in 1985. She went down with about 500 tonnes (that’s nearly 160,000 litres) of Bunker C fuel oil and diesel. In 2013 – 28 years later – oil started leaking from the vessel and oiled birds were found by hunters, raising significant concerns from local residents who rely on the ocean for a living.

Similarly, small but chronic spills at Newfoundland’s offshore oil platforms are rarely reported in the media, but occur in one of the most important areas for marine birds in Atlantic Canada, and arguably cause more ecological damage.

Yet because these don’t occur in heavily populated areas, or are unseen beneath white-capped waves, they are farther from our thoughts when we think about the state of our environment. And while we celebrate Earth Day and Earth Week, we should really think about our communal effects on the planet the entire year.

A massive oil spill in 1969 acted as an inspiration for Earth Day. But as Columbia University’s Steven Cohen says, “environmental protection is no longer simply cleaning up pollution after we’ve released it into our air, land and water, but is one element of an effort to build a sustainable economy.” Do we dedicate Earth Day to cleaning up toxic spills from our environment, or should we rather question their hazardous presence in the first place?

As Theresa Beer wrote for the David Suzuki Foundation, the spill in English Bay isn’t a wake-up call, but rather a reality check of what’s in store for the future, particularly as oil shipping and offshore production increases in the years to come.