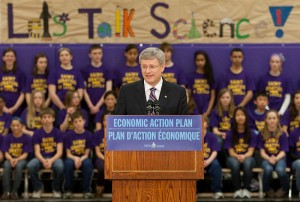 Now, we know that this federal consultation was short and quick. That was the essence of this post by Quebec journalist ValÃ©rie Borde, and this French-speaking podcast on science and policy. But with all those great minds and writers, was there nothing more to say in English?

Even with the federal budget last month, reaction was minimal considering that it seemed to be a (good) surprise for researchers. In his blog, journalist Jean-FranÃ§ois Cliche saw it as possibly “the beginning” of a move towards more basic research. More optimistically, mathematician Nassif Ghoussoub sees it as “a paradigm shift”. What do you think? 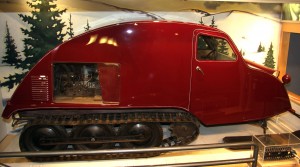 The Bombardier B7 was conceived in Canada in 1937 (this model was built in 1939). Is Canada still at the cutting edge of technological innovation? (Photo: Canadian Science & Technology Museum; CC BY-NC-ND 2.0).

Funding, by the way, was recently the topic of an excellent report in the New York Times on “privatization” of research by those generous-but-a-little-too-focused-billionaires (un rÃ©sumÃ© en franÃ§ais est ici).

On a related topic, Kelly Holloway, guest blogger for The Black Hole, posted a critical view on what he feels is too much of an “entrepreneurial mindset” behind last November’s Canadian Science Policy Conference.

And the muzzling of Canadian scientists was still on the mind of Monika Viktorova, who revisited last October’s damning report from the federal scientists’ union, which stated that “90% of federal scientists do not feel that they can freely discuss their work in the media.”

By the way, as of March 19th, Canada has a new Minister of State for Science and Technology: Ed Holder. See this (rare) portrait of him in the Globe and Mail.

Better dialogue between science and policy also means learning how to communicate to a non-scientist. Like doing a TED talk.

The distinction between “science for policy” and “policy for science” is a common one in this field, and various blogs help illustrate the difference.

One thought on “What’s the buzz (or not) around Canadian science policy?”