Currently, self-isolation is the norm for people all over the world as a result of the COVID-19 pandemic. While you’ve been staying home, you’ve been justifiably worried about the health of your family and friends, your career, and the economic impacts of the pandemic, but we wonder if you’ve given any thought to how our broad-scale self-isolation has impacted wildlife around the globe. 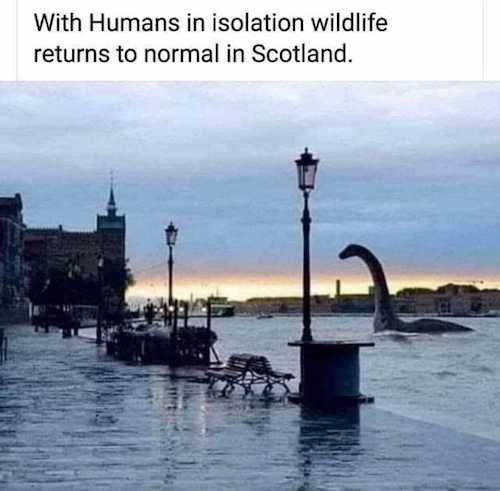 Many memes have cropped up about wildlife, both real and mythical, returning to their old ranges.

Reports of wildlife sightings have become common on our social media feeds and in the news. That includes #fakenews versions like dolphins returning to Venice and Godzilla returning to Tokyo. It’s easier to tell that the Godzilla and Loch Ness Monster posts aren’t real, but we’re certainly seeing lots of credible reports of nature “healing” while humans are self-isolating. But which ones are true, and which ones aren’t?

There’s no quick and easy method to tell if a post about wildlife on social media is true. Adam Ford, Canada Research Chair in Wildlife Restoration Ecology at the University of British Columbia Okanagan, advocates taking the time to fact check a post before sharing it to ensure that we “sanitize lies out of the information flow.” 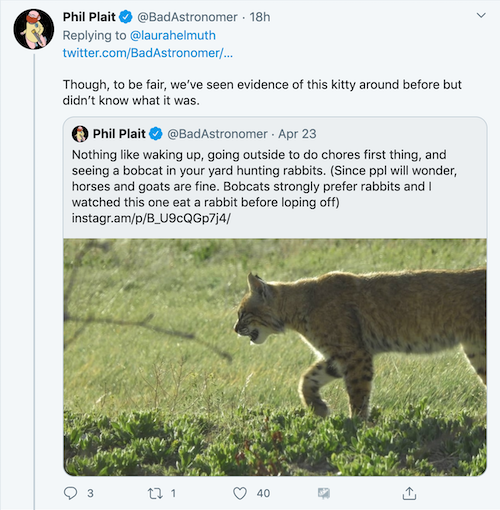 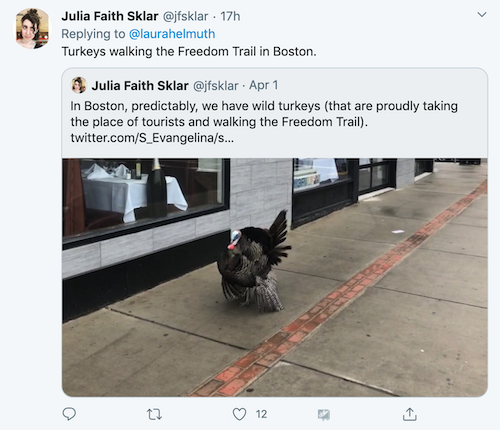 Reports of wildlife abound, as this thread on Twitter shows (excerpts above).

One thing is clear, in these uncertain times many of us now have the time to reconnect with our local natural spaces. Many Canadians have started to spend more of their time in their backyards and local parks. Whether it’s gardening, watching birds at your backyard feeder, or taking your dog out for an extra walk during the day, there has certainly been a rise in wildlife observation and appreciation across the country.

If you believe the headlines, it seems like our cities are being overrun by wildlife. But is it truly because wildlife is “returning” to the cities, or is it that they were there all along and we are now home to see them?

Emily Rondel, biologist and Vice-President of the Toronto Ornithological Club, thinks it’s the latter, noting that in Toronto “birdwatchers who regularly surveyed their neighbourhoods annually aren’t reporting increases, it’s just that more people are tuning into the show!”

Either way, the decreased human activity on our streets has allowed ecologists to research urban wildlife like never before. 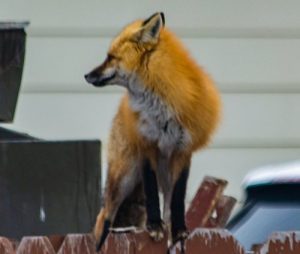 This red fox was spotted in the Jasper, Alberta, townsite on April 16. Photo by Mark Babbage, used with permission

Wildlife is benefiting from our decreased presence. Injured wildlife admissions to local wildlife rescues have gone down drastically as traffic has diminished. Busy roads can be dangerous to wildlife, causing death and injury to an animal that tries to cross. These deaths can become a serious concern when local animal populations become isolated and cut off from the larger population. For example, now that the provincial and national parks are closed, less traffic on the large cross-Canada highways means these roads are less of a barrier to the free movement of species like wolverine and cougar.

Decreased tourism has already benefited some wildlife, like sea turtles that breed on normally busy beaches. When the beaches are less crowded, sea turtles are better able to lay their eggs there and have them hatch successfully without being interfered with. Perhaps other beach ground nesters, like piping plover, will experience similar benefits.

Many of us have started to invest time and effort into our backyard gardens to the benefit of our pollinators. Rondel says “almost every North American songbird species changes to a mostly-insect diet during the breeding season.” So as an added bonus, our backyard birds may be getting fed while helping to keep our insect pests in check. 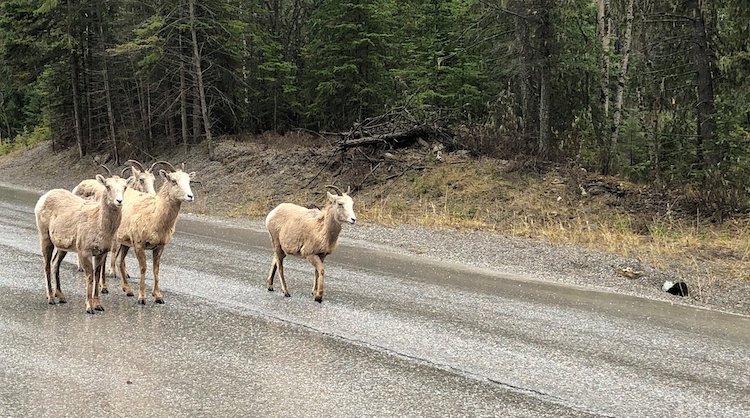 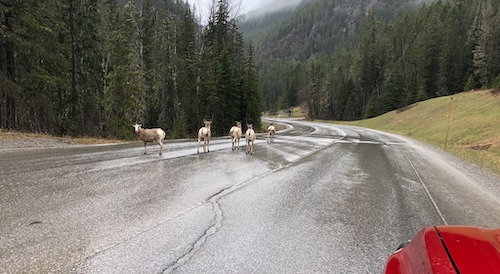 These bighorn sheep were meandering down the now quiet highway 93 near Radium Hot Springs, British Columbia, on April 30. Photos by Shelley Humphries, used with permission

But perhaps it’s not all positive for wildlife. The sharp decrease in tourism has had other unintended consequences. Animals reliant on tourists feeding them are now going hungry. Animals fighting for limited resources can provide an opportunity for filming some amazing wildlife interactions. However, wildlife habituated to hand-feeding by humans can also display aggression toward humans when food is scarce.

And a lack of human-provided food resources may also be making some of our less-liked wildlife, like rats, become more visible and more bold. It can be not only unsettling, but intimidating, to have rats and raccoons peering in at you through your window or even becoming more persistent at trying to find their way inside.

Human self-isolation can also have negative impacts on wildlife conservation. With a decrease in tourism revenue and conservation enforcement, poaching has increased in Africa. Wildlife conservation also requires significant funding, and in many places that funding comes from tourism income. In British Columbia, parks and green spaces are starting to open up as part of the Phase II restart plan. The sudden increase in the recreational use of these spaces could put a lot of pressure on the wildlife that lives there, says Ford. The long-term effects of a decrease in tourism on wildlife might not be known for many months to come.

We still don’t know when we’ll be getting back to normal, or what lasting effects COVID-19 may have on our economies, societies, and social interactions at either the national or international levels. Ford says, “a lot of people are renewing their connection with nature, and [that] could have positive effects for nature in the long run.”

Perhaps a renewed relationship with wildlife, and the environment, would be a positive aspect of our new normal.