Long Beach, between Ucluelet and Tofino, BC. Photo by Christina CC BY 2.0

The wet sand squishes beneath my gumboots as I walk along a beach near Tofino, on the western edge of Vancouver Island, British Columbia. Last night’s storm has strewn bull kelp and broken shells across the beach. It has also landed a true ocean oddity: a mermaid’s purse. 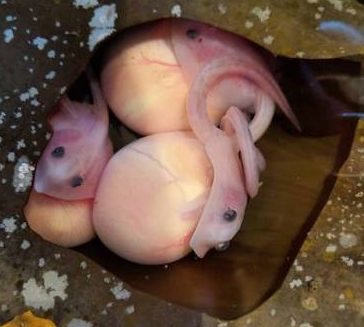 The three skate embryos and their yolk sacs inside their mermaid’s purse at the Ucluelet Aquarium. Aquarium staff built a window in the egg casing so visitors could follow their development. Photo by Hannah Reid

I pick up the tough, leathery pouch. Some species of skates â€“ ray-like creatures which can span up to eight feet across â€“ lay mermaid’s purses to protect their developing embryos. The babies develop within the egg-like pouch for up to eleven months.

How the young of these elusive deep-sea creatures develop is poorly understood, but since August 2018, researchers and visitors at the Ucluelet Aquarium have had the rare chance to watch three baby skates develop inside a mermaid’s purse found by a local beachgoer. 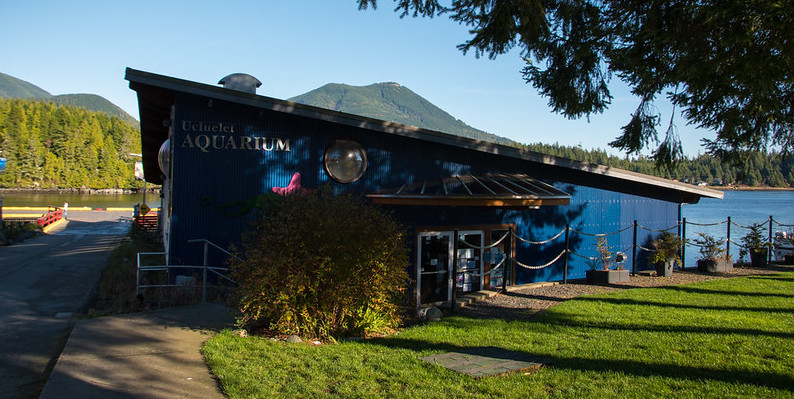 The Ucluelet Aquarium is Canada’s first captureâ€“holdâ€“release aquarium. The facility was so popular, this new aquarium was built in 2012. Photo by Rebecca Bollwit CC BY NC 2.0

Ucluelet is a small surfing town just south of Tofino. In 2004, the community established Canada’s first capture-hold-release (CHR) aquarium, the Ucluelet Mini Aquarium. The venue became so popular the town built the larger Ucluelet Aquarium in 2012.

Capture-hold-release aquariums collect fish and invertebrates from local waters, display them for educational purposes, then release the animals where they were originally collected. Ucluelet’s aquarium pumps water from the nearby harbour into its saltwater tanks, which provide temporary homes to everything from rockfish, sablefish, ratfish and sculpins to jellyfish, anemones and sea cucumbers. 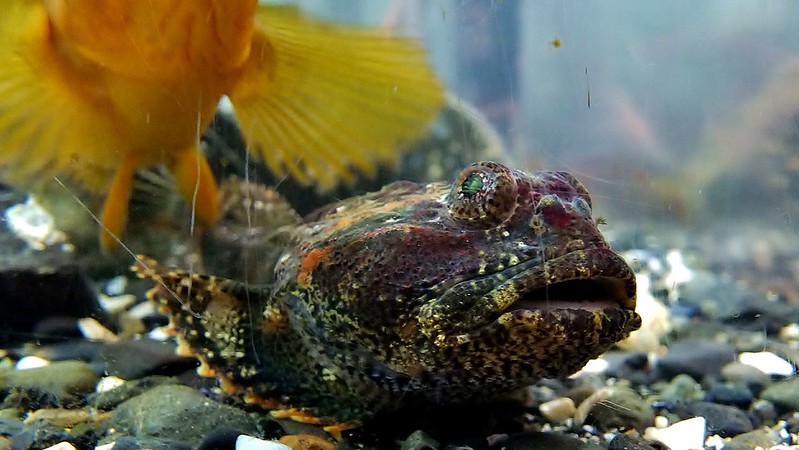 A sculpin from Ucluelet Harbour on display for the season at Ucluelet Aquarium. Photo by Clive CC BY NC ND 2.0

The timing of the sea creatures’ releases is variable and depends on the aquarium and the species. Most releases are semi-annual, some are more frequent (octopuses are released every three to four months), and some are only every few years (as is the case with large anemones). For Canadian CHR aquariums to release specimens, they need a release permit from the Department of Fisheries and Oceans Canada’s Introductions and Transfers Committee. The aquariums can obtain the permit only after a veterinarian has inspected the animals and judged them fit for release to minimize possible ecological, genetic, and disease risks to the receiving environment and wild populations. 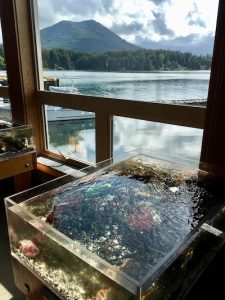 One of the touch tanks in the Ucluelet Aquarium overlooks the Ucluelet Harbour and Mount Ozzard. Photo by Hannah Reid

Dr. Craig Stephen, WCVM faculty and a veterinarian for the Canadian Wildlife Health Cooperative (CWHC) â€“ a nation-wide group of wildlife disease researchers â€“ performs veterinary inspections on everything from Chinook salmon to wolf eels during their brief stay in captivity in these aquariums.

Because community aquariums are small and have limited resources and funding, they hire veterinarians like Dr. Stephen to provide veterinary services when needed.

“We don’t have the budget or the staff to do all the fancy things that big aquariums do, like scoping a wolf eel, so a lot of it is about preventative medicine,” Kit Thorton, head aquarist at the Shaw Centre for the Salish Seas (SCSS), in Sidney, on southern Vancouver Island, says. “Because we have a transient population compared to other aquariums, keeping the animals in tip-top shape so we can release them and they’re not at a disadvantage is really important.” 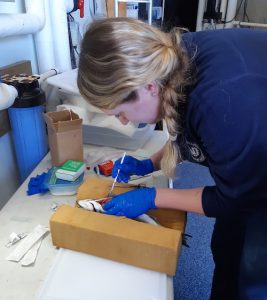 The author performs a necropsy on a Chinook salmon with a possible fungal infection. Photo by Hannah Reid

I am working with Dr. Stephen this summer to help determine the best management practices for these aquariums and to assist with veterinary inspections. The inspections we perform differ from the generic physical exam of a terrestrial animal, and pose interesting challenges. Catching the fish stresses them, so we must observe them in their tanks. Schooling fish also look very similar and the tanks’ acrylic sides cause glare â€“ which makes identifying fish even more difficult. Finally, little is scientifically or medically known about many of the cold-water species in these aquariums.

“There is an important role for the veterinary profession to play in [understanding] aquatic animals,” Dr. Stephen says. “There are more aquatic species than terrestrial [species], more food security issues, more conservation issues, and yet, as a profession, we spend very little attention on them…It’s a really important area for us to develop opportunities for students and faculty to be engaged â€“ in a country that has a bigger coastline than any other country in the world.”

When we identify a problem with an aquarium animal during our inspections, we try to treat it. We also, on occasion, perform necropsies to diagnose problems. For example, after observing two spotted ratfish at the Ucluelet Aquarium swimming increasingly erratically in their tank, aquarium curator Laura Griffith-Cochrane, Dr. Stephen, and aquarium staff decided to euthanize the fish and perform a fresh necropsy. The procedure allowed us to acquire and examine the fishes’ cerebral fluid. Under Dr. Stephen’s microscope, the fluid’s cells showed symptoms indicating meningitis â€“ inflammation of the meninges in the brain â€“ possibly caused by infection. 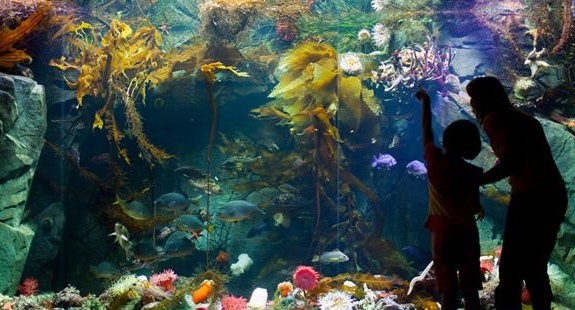 I also work with Dr. Stephen at the SCSS. Like the Ucluelet Aquarium, the SCSS houses local marine fish and invertebrates in tanks with water pumped in from the local harbour.

Although the Ucluelet Aquarium and the SCSS differ in some species and habitats, they share a common goal: engaging the community with the creatures in local waters. And the numbers suggest they are succeeding. Since 2012, the number of visitors coming to the Ucluelet Aquarium each year has more than doubled to 35,000 in 2018. The SCSS has also been increasing in popularity. 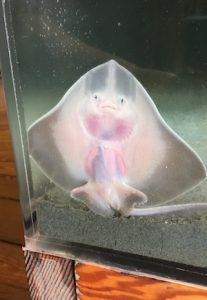 One of the newly hatched skates “smiles” at visitors to the Ucluelet Aquarium. Photo by Hannah Reid

All the sea creatures housed at the aquariums attract and fascinate visitors, but Griffith-Cochrane says the mermaid’s purse and its skate embryos currently developing in the tanks at Ucluelet also provide the community and aquarium with a unique opportunity to learn together.

“We’ve been able to talk about things that are beautiful and awesome in the ocean that people don’t really know much about,” she says. “I think people really bond with things that are cute and small…. And having something that people can have an emotional attachment to has helped us pass on some of those messages about why it’s important to know what it is that you’re catching and what sustainability means.”

Back on the Tofino beach, I walk down to the surf, and gently place the mermaid’s purse beneath the water. My appreciation for the goals and challenges by community aquariums â€“ and for all ocean oddities â€“ has increased throughout this summer. My love for Vancouver Island’s captivating coastline, cold waters, and aquatic creatures has never been stronger.

Western College of Veterinary Medicine student Hannah Reid wrote this post as part of Science Borealis’s Summer 2019 Pitch & Polish, a mentorship program that pairs students with one of our experienced editors to produce a polished piece of science writing.