What mysterious critters and creatures are lying dormant, frozen beneath the Arctic’s surface, and what will emerge as a result of thawing permafrost and melting ice in a globally changing climate?

Recently, pop culture has taken notice of the threat of ancient diseases in the age of climate change. In the TV show, The Last Ship, Dr. Rachel Scott is conducting top-secret research missions in the Arctic to save humanity. Her goal is to find antibodies in ancient animal remains that are emerging from the ice as ice sheets shift and glaciers melt. Her research vessel, a U.S. Navy ship, has gone radio silent to protect her mission, and the crew is unaware that a pandemic is sweeping the world. Dr. Scott’s research to find ancient antibodies to face this new plague may be humanity’s last hope to save itself.

Researchers from across the world have expressed concerns that new or re-emergent pathogens released by thawing permafrost, like anthrax or smallpox, could pose serious risks for global health. 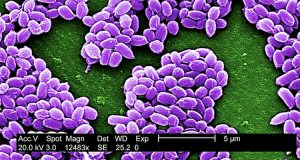 As our bodies and our cultures have evolved over the millennia, so too have the pathogens we live with. Our immune systems may not recognize the viruses and bacteria that our ancestors were routinely exposed to making us more vulnerable to serious infection. Pathogens that ancient humans lived with may be lying dormant beneath the permafrost and glacier ice, and they could still be viable when they are released.

A real life example, straight out of a horror movie, occurred above the Arctic Circle in Russia in 2016. The Siberian Plague re-emerged killing a young boy and hospitalizing dozens. This was linked to a heat wave that thawed the permafrost and exposed the 75-year old carcass of a reindeer that had died in a previous epidemic. Infectious anthrax bacteria, which can survive freezing temperatures, then leached into the surrounding soil and water and infected humans and other local wildlife. There hadn’t been an outbreak of this kind in this region in over 50 years. 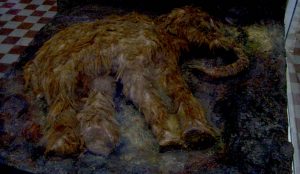 In another part of the Arctic, research student Zac Peterson believes he acquired seal finger infection. This happened during fieldwork at an ancient hunting cabin in Alaska, where Zac handled 800-year old frozen seal carcasses at an archaeological dig site in Alaska that had been recently uncovered by storm activity.

Biological threats from melting ice aren’t just limited to humans. Increased movement of seals, sea lions and sea otters between the northern Atlantic and Pacific Oceans, made possible by diminishing Arctic sea ice extent, has been linked to the spread of a viral infection among marine mammals.

Permafrost is rocks or soil that remain at or below freezing (0Â°C) for two or more consecutive years. Permafrost is found at high latitudes and high altitudes, that is, near the North and South poles, and on mountaintops. The thickness of permafrost varies from a few meters to hundreds of meters and can be discontinuous or continuous for thousands of square kilometers. The tundra of Northern Canada is such an expanse of permafrost landscape. 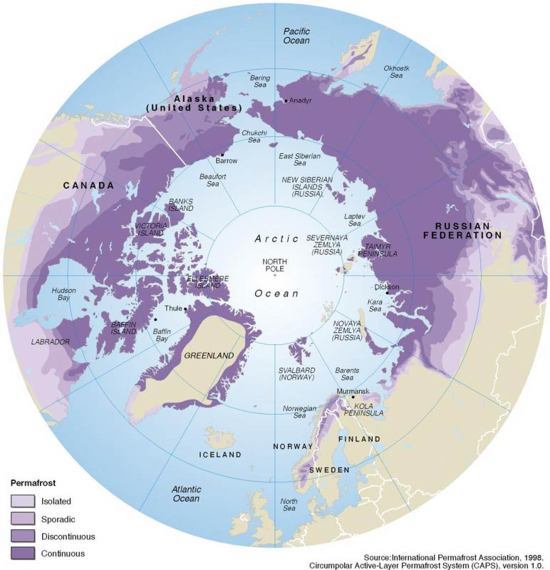 There is a natural freeze-thaw cycle in permafrost. The “active layer”, which can be up to dozens of centimetres thick, thaws during the warmer summer months and freezes again during the Arctic winters. However, with warming temperatures as a result of global climate change, the active layer is becoming thicker and extends deeper into the permafrost. Milder winter temperatures mean that when this layer refreezes, it is not as cold as in previous years. This can have environmental, economic and cultural impacts. And this has the potential of thawing land that has remained frozen for hundreds or even thousands of years.

Sea ice forms along the Arctic coastlines, providing a buffer between the vulnerable sediments of the coast and the wave action of the sea. As climate change warms the oceans, sea ice thickness is declining, and the sea ice season is becoming shorter. This means that the coastal permafrost is exposed to wave erosion for longer during the summer and early fall.

Glaciers are massive sheets of dense ice, which move (slowly) over land. During the ice ages, glaciers covered much of the Northern Hemisphere. Glacier ice typically “flows” downhill (alpine) or outward (ice sheets or ice caps), by a centimetre or two a day. They contain rocks, plants, carcasses and other material that have been moved hundreds of kilometres over thousands of years.

Canadian Geographic reports that as much as 50 per cent of Canada’s land mass is covered by permafrost. Canada’s Changing Climate Report states that temperatures in Canada’s north are increasing at three times the global rate. Over the past 30 years, the proportion of Canadian land and sea covered by ice has decreased, and temperatures over the permafrost have increased. Researchers predict that by 2100, western Canada will have lost up to 70 per cent of its glaciers as they retreat in response to warming temperatures.

As the ice wedges in permafrost melt and glaciers retreat, meltwater is released into the environment containing traces of whatever else has been frozen in them for centuries. It’s like a thousands-year-old freezer that’s on the fritz. As frozen organic material begins to thaw, it leaches out into the environment, like the water you’d find under a defrosting chicken.

And there are more than just pathogens hidden in these ancient freezers. Chemicals, toxins, plant matter, and frozen carcasses of ancient creatures large and small are preserved in the permafrost. Changes in permafrost and the materials released as a result, present many risks. 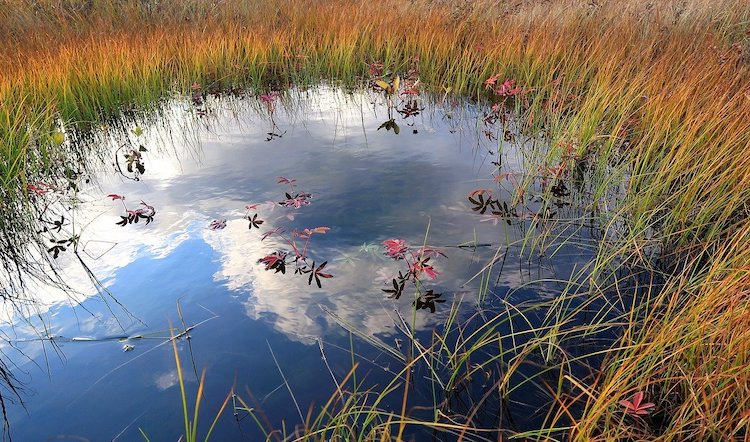 Back in Siberia, French scientists were able to revive a 30,000-year-old virus from samples collected in the permafrost, and it was infectious! This virus doesn’t infect humans, but it begs the question of what other surprises might be hiding in the frozen ground. Researchers in Siberia claim to have revived 40,000-year-old nematode worms found buried in the tundra. Canadian researchers collected samples of 150-year-old moss exposed by the melting Teardrop Glacier on Ellesmere Island in northern Nunavut. When brought back to the lab, this moss thrived and grew and even produced new shoots.

Life has an incredible capacity to persist in the harshest environments, and the things that we find may not be all bad. From the Siberian plague to the miracle cure heralded in The Last Ship, we are certain to discover new, incredible, and sometimes terrifying things lying beneath the thawing permafrost.