Love ‘em or hate ‘em, no sporting event captures the world’s attention quite like the Olympics. Whether you’re boycotting the games in support of LGBT issues, or clinging to the edge of your chair with every clap of a speed skater’s blade, the Olympics are virtually impossible to ignore.

One of the more intriguing aspects of the Olympic Games is the science behind them. We hear about it every once in a while, when discussions about doping, prosthetics or speed skating suits surface in the ocean of media stories. But there’s much more science to the Olympics than you might imagine â€“ and science bloggers, including Canadians, have been busy telling these stories.

It all starts with the science behind Olympic venue selection. In the face of climate change, weather and climate become important considerations. In addition, the effects on athlete performance of temperature, altitude, and other variables has to be weighed. 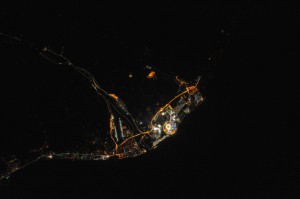 Science and technology come together to give us this unique view of The Olympic Cluster at Sochi. (Credit: NASA (CC BY-NC 2.0)

Because science can give athletes such an (ahem) edge, Olympic officials spend a great deal of time measuring and controlling the various pieces of sporting equipment used in competition. In the sport of luge alone, the weight of athlete and sled, aerodynamics, body position, mental preparedness and even the length, width and composition of the sled’s runners can mean the difference between a podium finish and a disappointing fourth place.

For winter sports, snow and ice science is critical in determining surface conditions and their effects on ski, skate and snowboard friction. To help athletes prepare their equipment for a perfect run, there’s the extreme science of ski waxing â€“ the secrets of which are so closely guarded by technicians that competitors have been known to resort to espionage in order to find that perfect chemical combination.

It’s not only equipment that requires care, repair and regular tune-ups, but athletes’ bodies require the same. The Health and Science Team (HST) supporting the more than 200 Canadian athletes at Sochi consists of 50 health and science professionals including doctors, physiotherapists, massage therapists, nutritionists, exercise physiologists, mental performance consultants, and sports scientists. They work together to balance an athletes’ desire to stay in the game against the risks of exacerbating health issues or prolonging injuries.

In some extreme cases, science is even used to determine whether an athlete is biologically allowed to compete, as was the case with South African runner Caster Semenya in 2012. In other cases, a misunderstanding of science has wrongly prevented athletes from competing, as in the case of female ski jumpers.

When it comes to biology and an athlete’s other internal workings, understanding the psychology behind peak performance is also necessary. For example, Bob McDonald at Quirks and Quarks notes that human’s natural response to fear can provide an edge in athletic performance.

Of course, we can’t forget doping-detection science, which is locked in a Red Queen race with doping science to keep the games clean and fair. These include performance enhancing drugs, blood and gene doping and, occasionally, more ubiquitous substances such as caffeine or sodium.

After the competition, data analysis on everything from race times to spin speeds helps athletes retool their techniques. And, if you’re the betting type, data mining for variables such as a nation’s GDP, latitude, dominant religion, and population may provide models for predicting not just medal counts, but actual outcomes.

Meanwhile, space science has added a special bonus for some of this year’s medal winners. Fragments of the Chelyabinsk meteorite were embedded in special medallions awarded to gold medalists who won their events on February 15th, the anniversary of the meteor’s fiery entry into earth’s atmosphere.

Whether you love ‘em or hate ‘em, the Olympics can provide a creative way for science writers, bloggers, and artists to tie their favourite topics together in posts on subjects ranging from insect Olympians to stem cells to Russian conservation. And if the flashiness of the opening ceremonies can help us appreciate a newly-named Australian peacock spider, then it’s an event worth celebrating.

One thought on “Getting a scientific edge on Olympic competition”