Given that you’re reading this on scienceborealis.ca, a site dedicated to science communication, I’m going to assume that you’re probably not. And why should you be? Good chemistry is the basis of romance, so much so that it’s the name of a prominent dating site.

But when it comes to the actual stuff that chemistry is done with â€“ chemicals â€“ many people quickly change their tune. In the media and in daily parlance, the word ‘chemical’ is often paired with words like ‘toxic,’ ‘dangerous,’ ‘hazardous’ or even ‘deadly.’ Having interviewed hundreds of scientists over the years, I can say that this negative public perception â€“ real or perceived â€“ is the number one pet peeve of chemical professionals.

Part of the problem is a lack of nuance. When we think about a given chemical substance, we tend to want to categorize it as either good or bad, safe or dangerous. The reality is that many chemicals can be both or, if you prefer, neither. Their effect on human health depends strongly on how and when we are exposed, for how long, and above all, at what dose.

I was thinking of this as I read about a study published last Monday in Proceedings of the National Academy of Sciences. Done by a research group out of the University of Toronto Scarborough, it concerned a group of chemicals called polycyclic aromatic hydrocarbons (PAHs), and their potential release from smokestacks and tailings ponds associated with Alberta’s oil sands mining operations. The gist of the study (which was widely covered in the media) was that more PAHs may be getting into the environment than previously thought.

Corannulene is, for my money, one of the prettiest of the polycyclic aromatic hydrocarbons. (Credit: line diagram by Inductiveload, space-fill model by Edgar181, both via Wikimedia commons)

The study was a good one, and I admit that as chemicals go, PAHs are not exactly the easiest to fall in love with. While one could theoretically find something aesthetically pleasing about their chemical structure, which consists of a series of interlocked aromatic rings, their origin is unavoidably dirty. PAHs are most often created as the products of incomplete combustion, which means that they are major components of car exhaust, soot, smoke, ash and other nastiness. They’re also found in oil, tar and bitumen. And to top it all off, many â€“ though not all â€“ PAHs are known to cause cancer. In fact, the PAH called benzo[a]pyrene has the dubious honour of being the very first chemical to have been identified as a carcinogen: it’s what makes cigarette smoke so bad for your lungs.

In addition to being tastelessly asymmetrical, bezo[a]pyrene is an established carcinogen.
(Credit: line diagram Calvero, ball-and-stick by Drbogdan, both via Wikimedia commons)

Despite all the reasons to hate them, we actually put up with PAHs on a daily basis, mostly without even batting an eye. Frank Wania, one of the study’s authors, points out near the end of this video that PAH concentrations in the air near Alberta’s oil sands operations are on par with what they would be in any major city, such as Toronto. That’s certainly not ideal, and it does pose a risk to the health of Torontonians. But at the same time it provides perspective, in that millions of people have decided that air pollution is a risk they’re willing to take in order to gain the benefits of living in a big city. Another source of PAHs is charred, smoked or burned food, and while nobody is advocating a steady diet of blackened hamburgers, the odd bit of overcooked meat or veggies is not something most of us would raise much of a fuss about.

But to me the most intriguing thing about PAHs is the fact that they’ve been found in space. Astronomers scanning light from distant nebulae have detected the tell-tale signatures of PAHs, and they’ve also been found inside meteorites. In fact, scientists have shown that under the right conditions PAHs can react to form molecules like amino acids and nucleotides, which are the building blocks of proteins and DNA, respectively. It’s by no means certain, but it’s possible that PAHs are the source of the biomolecules that formed the raw ingredients for life to begin on Earth, and very possibly on other planets as well. 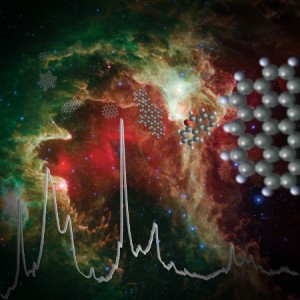 An interstellar nebula showing the emission from PAHs in red, some PAH molecular structures and the interstellar PAH infrared signature. (Credit: NASA)

My point is not that fears about chemicals are unfounded: every human activity involves some kind of risk, and we’re right to be concerned about our health. But picturing chemicals, even unlovely ones like PAHs, as uniformly good or bad can cause us to miss out on the bigger picture, which is almost always less frightening and more interesting than it seems on the surface. The next time you hear about a ‘toxic’ chemical, take the time to dig a little deeper. There may be more to the story.

For more on chemophobia and a discussion of what chemists should and shouldn’t do to fight it, check out this post by Marc Leger, also featured in the Chemistry channel of scienceborealis.ca. To add your chemistry blog to our channel, click here.

One thought on “Curing chemophobia or, how I learned to stop worrying and love PAHs”