After years of delay, construction of one of the world’s largest telescopes atop Hawaii’s highest mountain can resume. The Thirty Meter Telescope (TMT) received the green light to proceed from Hawaii’s Supreme Court on October 31. Construction was put on hold in 2015 after almost a year of permitting issues, court challenges, and protests by Indigenous Hawaiians, who consider Mauna Kea to be sacred. 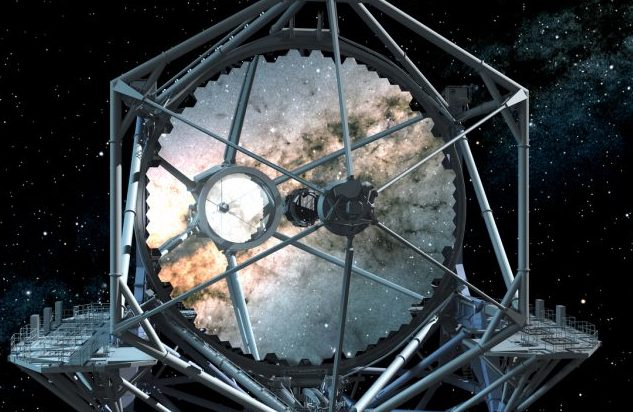 Artist Concept of TMT Primary Mirror: The mirror is segmented and comprises 492 hexagonal segments, each about 1.44 metres across. Credit: TMT International Observatory

Although further legal action against the $1.4-billion venture may occur, the international telescope team, which includes Canadian astronomers and engineers, is continuing its work on the telescope’s design and components. They’re aiming for first light in the late-2020s.

Once operational, the massive telescope’s 30-metre, 492-piece segmented mirror will be able to collect light from the early universe, detect planets around other solar systems, reveal secrets about massive black holes, and provide new observational opportunities in almost every field of astronomy and astrophysics.

These are the two components Canada is contributing to this five-country project.

Two key factors drive the design of the structures that house large telescopes, says David Halliday, president of Port Coquitlam, BC’s Dynamic Structures, which is designing the TMT’s enclosure. “The enclosure must protect the telescope, and it must make the telescope believe that the enclosure isn’t there — that the telescope is sitting out in the open.”

A well-designed telescope enclosure protects the costly, sensitive instruments from the extreme high-mountaintop environments where modern telescopes are located. It adjusts for the quick changes in temperature found at altitude. These changes can cause the air immediately in front of a telescope mirror to move, distorting the starlight passing through it, and can also cause the telescope’s focal length to contract or expand. Both effects compromise the telescope’s scientific results.

In addition, a well-designed dome minimizes vibration caused by the wind, surrounding activity, or the mechanical parts of the dome that move as the telescope tracks a star across the sky.

This project required a new approach, says Halliday, who has guided the company’s work on 12 telescope projects since the 1970s. The largest telescope in operation — the Keck Telescope, operating on Mauna Kea since 1996 — measures 10 metres inside a 30-metre-diametre enclosure. Using that design for the TMT would result in a 50-metre enclosure — the size of a small sports stadium.

Scaling creates structural and cost challenges, and, Halliday says, by “increasing the size of the enclosure, a whole raft of thermal and wind and other issues that disrupt the telescope accelerate.” The company’ssolution for TMT is a “calotte” enclosure. The eyeball-shaped structure rotates at the base. A cap sitting on that base at 45 degrees also turns. The combined angles of rotation allow the enclosure’s eye to match the telescope as it tracks. Doors around the base open to allow airflow through the building to eliminate the heat-difference problem. Baffles around the eye shape the wind’s path around the telescope mirror.

In addition, “the calotte design allows us to make the enclosure smaller relative to the telescope’s size,” Halliday says. “It also protects the telescope better, because we can seal it up and focus on controlling thermal issues.” 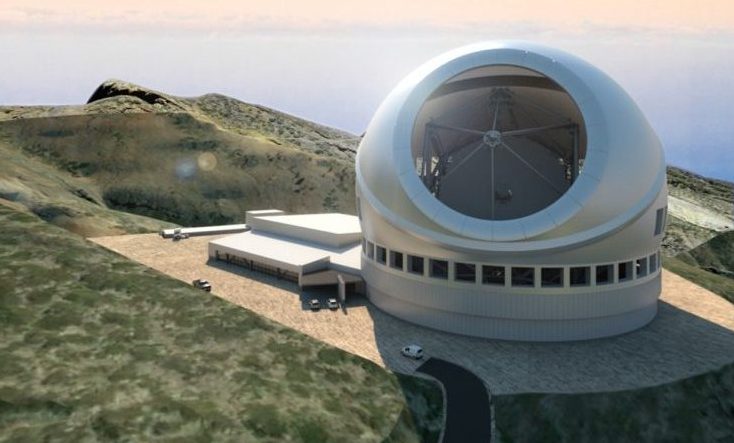 Earth’s atmosphere presents challenges for starlight-gathering telescopes that sit on Earth’s surface. As the atmosphere swirls, it causes the starlight passing through it to refract and shift. When that twinkling light hits a telescope mirror, the resulting blurry image compromises research.

Canada is developing technology that will remove that twinkle. The planned adaptive optics system will allow the telescope to create images of the universe of the same clarity as the Hubble Space Telescope.

“Adaptive optics measures the optical disturbances introduced through the atmosphere and corrects them in an instrument on the telescope in real time,” says Scott Roberts, TMT Systems Engineering Group Leader at the National Research Council’s (NRC’s) Herzberg Astronomy and Astrophysics centre in British Columbia. Roberts coordinates TMT systems across the entire project to help ensure that the components Canada provides can talk to the components contributed by India, Japan and the other country-partners. “Adaptive optics is the key technology that will enable the TMT to be 100 times more sensitive at collecting light than previous generations of telescopes.”

The narrow field infrared adaptive optics system (NFIRAOS; pronounced nefarious) that NRC engineers are designing for the telescope focuses on key reference stars, then measures the turbulence in the atmosphere between those stars and the system’s photon detector.  “The instrument feeds that information to the adaptive mirrors within the system,” Roberts says. “These mirrors can change shape 800 times a second to adjust for and fix, in real time, the optical aberrations that the atmosphere introduces.” When light from the 30-metre-diameter mirror hits these deformable mirrors, the result will be a sharp, focused image. The system then passes that image to the instruments that make the measurements astronomers need for their research. 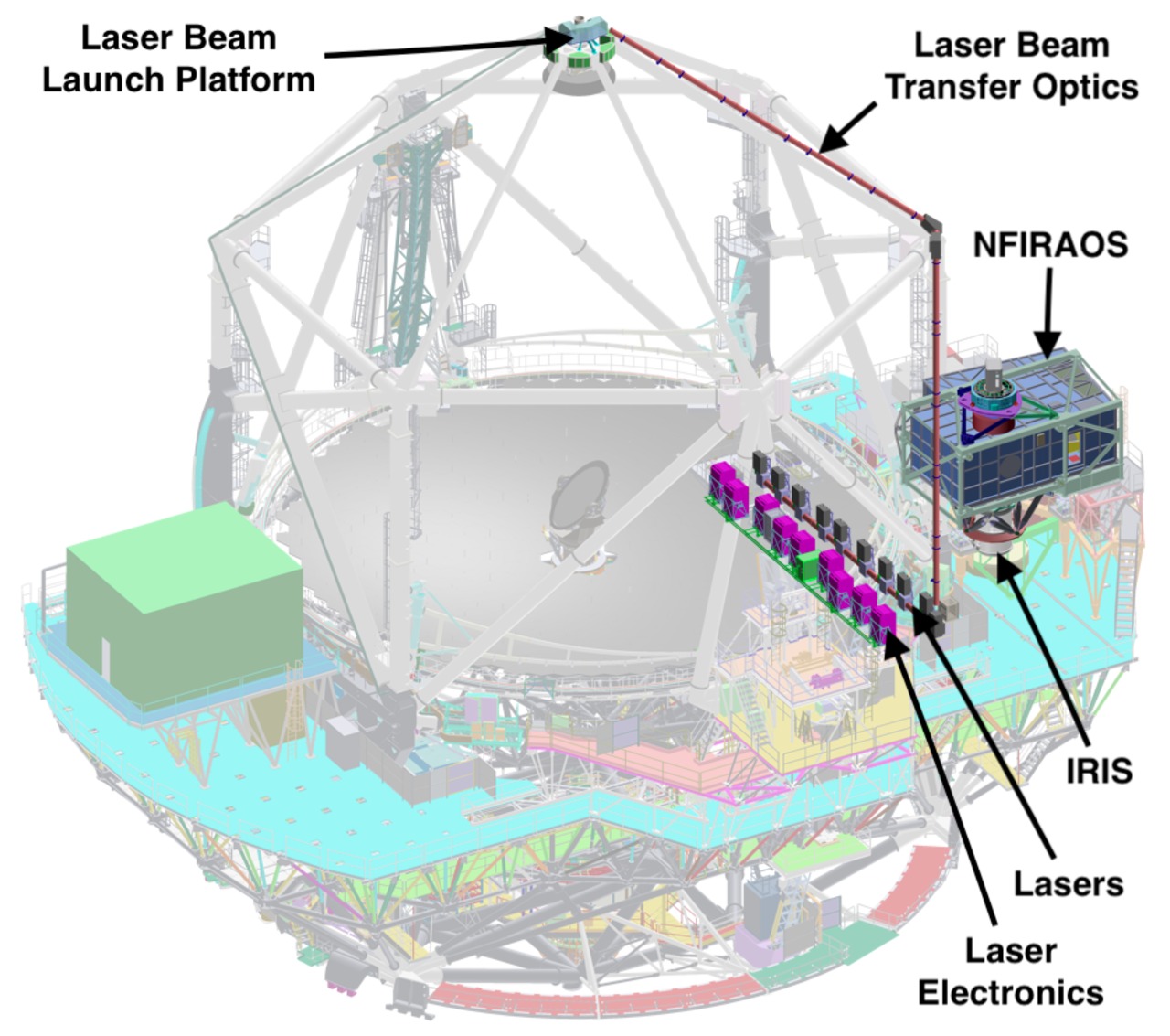 The infra-red imaging spectrometer (IRIS) will take images and spectra of astronomical objects at resolutions and brightnesses beyond the capabilities of any instrument currently available. “Imagine NFIRAOS as a pair of eyeglasses for the telescope,” says astronomer Luc Simard, who directed NRC’s Astronomy Technology division, a team of 68 scientists, engineers, technicians and support staff, before recently taking on his current role as director general of the NRC’s Herzberg Astronomy and Astrophysics Research Centre. “These super-goggles correct the atmosphere in real time, then feed that to the eyeball. The eyeball, in this case, is IRIS.”

The results, says Simard, will be worth it. “Adaptive optics is what is going to make a telescope like TMT reach its full scientific potential. The science we will be able to do will be mind-blowing.”

Alex B. LeBlanc is a B.C.-based science writer and editor..