Canadian Blood Services (CBS) is a Canadian not-for-profit that provides blood, plasma, transfusion and stem cell registry services on behalf of all provincial and territorial governments excluding Quebec. CBS also performs and participates in research to advance the knowledge of transfusion and transplantation science and medicine in Canada and around the world. Image copyright 2022 Canadian Blood Services, used with permission.

Have you ever wondered what it’s like to be a science communicator? Here at Science Borealis, our goal is to tell stories about Canadian science and help our fellow citizens understand the role that science plays in society. We’re a group of communicators from a variety of backgrounds who share a passion for science and storytelling. As a member of the Science Borealis editorial team, I recently had the opportunity to act as a judge for the Canadian Blood Services (CBS) lay writing competition. As someone who loves sharing my scientific expertise through writing, this was a great opportunity for me to listen to other people tell their own stories.

The theme for this year’s lay writing competition was science behind the scenes. The competition was open to members of the CBS trainee network, with the goal to help network members gain science communication skills by sharing their research using everyday language. Each writer interpreted the theme slightly differently as they shared important but less well-known aspects of their research. Even as a researcher myself, many of the entries provided me with a new perspective into the scientific process and its significance! 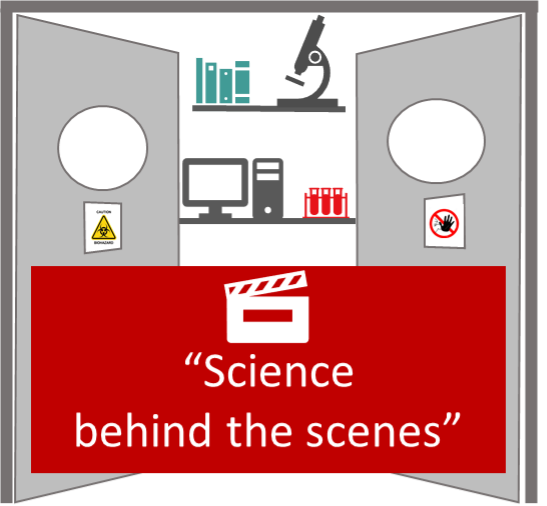 The theme for this year’s lay writing competition was “Science behind the scenes.” Each entry provided valuable insight into the work that goes into producing new scientific knowledge. Image by Canadian Blood Services, used with permission.

The winner of the competition, Alexandra Witt, is a graduate student at the University of British Columbia. In her article, titled “What does it take to make a lifesaving drug?” she wrote about her work developing a new drug that helps break down blood clots. Her entry describes the steps she takes testing proteins and the questions she asks herself throughout the process. If you want to learn more about science behind the scenes, you can also check out the second and third place entries, titled “The greatest tool in research” and “Queer identity and blood donation.” These entries all provide a window into what goes on behind the scenes of research. But what goes on behind the scenes of science communication? To help answer this question, I spoke with Witt about the work that went into her winning entry. 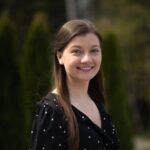 Witt describes herself as someone who has always liked asking questions. In class, she was always the one asking “why?” She wanted to know not just what happened, but why this was the case, and what was its significance. This deep curiosity led her to complete an undergraduate thesis and eventually to matriculate into the Centre for Blood Research at the University of British Columbia to pursue graduate studies. She’s incredibly passionate about her research and she loves taking the opportunity to tell people about it. When she learned about the CBS lay writing competition, she thought that it would be a great opportunity to test her science communication skills in a different medium: writing instead of talking.

When describing her writing, Witt says, “You really needed a story. I like when there’s a flow to things, when there’s a recurring theme in the writing.” This led her to start asking questions to the reader, because questions led her into research in the first place. “I needed something that was engaging and very much a theme, and I ended up coming up with the idea of questions. So, what do you do now? What’s the process behind it?”

After deciding on a theme, she wanted to come up with an analogy. “If you can find a way to explain [your research] with analogies or really simple words, it actually makes a lot of sense.” Witt found that, as she was explaining things to people, she would try out different analogies and gauge their response to each one. What worked and what didn’t? Finally, she came up with the idea of construction workers building something, a concept her roommate described as “really easy.” “That’s the word I really wanted to hear, I wanted to hear that it was so easy to comprehend,” said Witt. One of the challenges in science communication can be explaining something in a way that highlights the main idea without getting bogged down in the details. A good analogy can help to do this.

Once she had her analogy and her theme, she needed an engaging way to introduce her topic. “I decided my intro would be tofu proteins and I went from there!” said Witt. The process involved trying out different ways of telling her story, combining her favourite parts of different versions, and lots and lots of editing. Writing on the subject helped her to better understand her own research. “It was really fun!” she said, and she would like to do more writing in the future.

For anyone looking to get into science communication, Witt says her advice would be to talk to people. “Talk to everyone in your life who is willing to listen to you babble … and just see what they respond to. I think it’s really important to get everyone’s feedback. [Ask questions like], ‘Do you mind if I test out this analogy on you?’”

For all of us science communicators, science is something we’re passionate about. Pursuing science involves constantly learning and trying out new things. If there was one thing I took away from my conversation with Witt, it was a reminder that science communication isn’t all that different. It, too, is a process of asking questions, trying new things, and learning from your mistakes. Judging for the lay writing competition has made me excited to try out some new techniques in my future writing!