We don’t often think about how scientific discovery impacts the things we do as we move through our daily lives. We tend to compartmentalize science as subjects taught as “physics” or “chemistry” in elementary and high school, or as a discipline you might study in university, perhaps building it into an academic career. Or maybe it’s just something you encounter from time to time when you happen to catch an episode of The Nature of Things or click on an interesting headline online.

But think about road design, for instance, or how food is grown, raised, processed and stored, or how health care is improved and shared, and it becomes immediately apparent how scientific understanding is woven deep into the fabric of society. 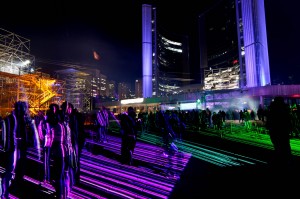 The Science in Society theme on Science Borealis incorporates blogs that look at just how science is applied in our everyday lives, across a diverse range of topics such as education, design, agriculture, health, sports and recreation. We’ll look at issues such as “pseudoscience”, the portrayal of science in art and culture, and ethics. As much as possible, we’ll draw on Canadian science blogs that you’ll find on this network and elsewhere.

To get started, here are some recent examples drawn from the Science Borealis blog feed that illustrate surprising and unexpected ways in which science touches various aspects of our lives.

The meat we eat

“If you’re putting your cattle through the chute, and these are key animals in your herd, pull a few tail hairs, put them in an envelope, store it in your office. That day will come when you may want to do DNA on an animal that was influential in your herd and they may be gone out of your herd…”

“The results showed differences in scratching behaviour. The cats most likely to scratch ‘inappropriate’ items were entire males, who did not have a scratching post in the home. On the other hand, some cats hardly ever scratched inappropriate places, particularly neutered males, and intact females with access to the outdoors. The most important finding for cat owners is this: If a scratching post is present, cats use it.”

Getting to work on time

“…I really can’t get my head around why the signals would be on a fixed timing pattern when there is next to no traffic on either street. The purpose of a traffic signal is to assign right-of-way to vehicles and pedestrians. When used properly they promote orderly traffic movement and prevent excessive delays. In this case though the signals are the only thing delaying traffic. And that’s a problem; one that, luckily, can be easily fixed.”

From: All Roads Lead to Ryan

On May 21st, 1822 on the Bothmer Estate in KlÃ¼tz, Mecklenburg, Germany, someone shot a White Stork. You see, this was the 2nd time someone tried to kill this particular stork, but the first time didn’t go so well (for the hunter), and the stork got away. With a spear in its neck. It was an “arrow stork” or “Pfeilstorch” in German. And it was the key to one of the most amazing, elusive, and important parts of animal life history: migration.

From: The Lab and Field

Finding art in an oil puddle

“The oil puddle rainbow is a marvel. The vision orchestrated by the oil, the water, and the sunlight all share a common origin in the heart of stars. The water from stars at the early days of our universe, the oil from photosynthesis-supporting solar power of millions of years ago, and the sunlight that emerged from our nearby star just minutes ago â€“ they provide a connection, a rainbow connection, from the dawn of time to today.”

4 thoughts on “Touched by Science”