Movember 2013 has come to an end, and soon the hype over moustaches, men’s health issues, and fundraising for prostate cancer research will give way to Christmas carols and holiday greetings (unless, of course, you celebrate the lesser-known Decembeard). 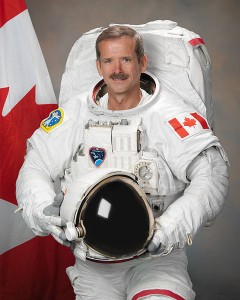 Chris Hadfield, a Canadian science celebrity, also has a moustache and supports Movember.

In contrast to the massive online campaigning and support for Movember on social networks, blogs and news sites, the scientific community has been relatively silent on this movement. Here are a few Movember highlights from Canadian science bloggers.

Writing on Public Library of Science (PLoS) blog Public Health Perspectives, Atif Kukaswadia has raised the issue of men’s shorter life expectancy compared to women’s, and men’s reluctance to ask for medical assistance unless their condition is very serious. There is a social stigma against men seeking medical care for perceived non-serious problems, or even simple check-ups, and it is even more severe with regard to mental health issues. This is despite the fact that suicide rates are generally higher among men than women. Movember aims to change this stereotypical behaviour and break the stigmas.

Over on the Stem Cell Network’s Signals Blog, Sara M. Notle takes a different approach by discussing some highlights of prostate cancer cell biology. There are many well-written blog posts about prostate cancer research, and linking them to Movember makes them accessible to a much wider audience.

Unfortunately, Movember seems to be a lot about growing moustaches and raising money, but less about awareness. We’ve met many men growing a Movember moustache who have no idea why they’re doing it. Science bloggers can take advantage of this brief period of interest in men’s health to start discussions on the science underlying prostate and testicular cancer, and other male-specific health issues. On the flip side, prostate cancer researchers and funding agencies could highlight how campaigns like Movember have made their research possible.

Research into the efficacy of the Movember movement is rare, which isn’t surprising given that the campaign only began in 2004.

Has Movember successfully motivated men to visit their doctors more frequently than they did prior to 2004? Has there been an increase in early diagnosis of prostate cancer, apart from those attributed to clinical advances, since Movember first started? Is there a significant difference between countries that embrace Movember â€“ and those that don’t – in terms of prostate cancer diagnosis and/or treatment?

Margaret McCartney writes in the Biomedical Journal that Movember might be misleading men[1]. She suggests that, by shining the spotlight on selected issues such as prostate cancer and testicular cancer, we may overlook other crucial risk factors such as alcohol and tobacco use, substance abuse, and obesity. It could be argued that these issues apply to both sexes and are not truly “Movemberable”, but if you’re taking the time to engage men in health conversations, giving a distorted message of what is important may do more harm than good.

Movember is very popular in Canada: in 2011, Canadians raised more than $41 million, or roughly one third of the total raised worldwide[2]. Thankfully the money raised has been put to good use. However, despite its success in fundraising, Movember needs more help from scientists and science bloggers to broaden the scope of men’s health communication to the public and explain the science and research behind it.