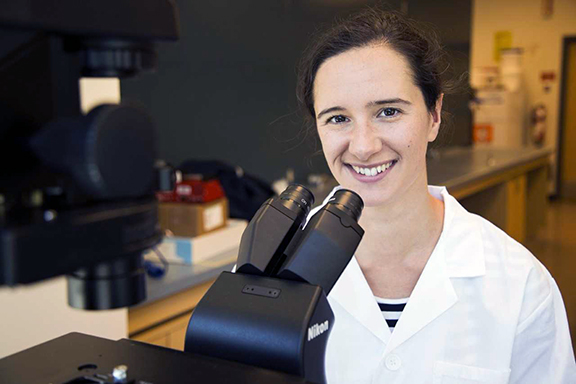 Dr. Katherine Elvira is an Assistant Professor in the Department of Chemistry at the University of Victoria (UVic) in British Columbia. She first discovered her passion for analytical chemistry as an undergraduate student, but had to overcome the challenges of being a female researcher in a male-dominated discipline to realize her professional goals. Now, she’s happily working in a department that actively supports women. Her determination is a model for aspiring scientists.

Growing up in Spain, Elvira was encouraged to be curious by her parents. “I still remember, as a kid, getting this encyclopedia on a CD-ROM and being able to ask it questions and find answers. It was amazing!”

With this thirst for knowledge, Elvira convinced her parents to let her finish high school in the United Kingdom so she could attend university there as well. As an undergraduate, she attended Imperial College in London and quickly embraced the newfound competitive environment. “The grading system was different. In Spain, if something was graded out of 10, then you could get 10/10. At Imperial, the top mark was 70%, so they left 30% for you to be brilliant. So, for the first time, I was graded on where I was expected to go. It was challenging, and I loved it. They had high standards but they helped me get there.”

Surprisingly, chemistry wasn’t on her radar before Elvira started applying to universities. “I was rubbish at practical chemistry because I had never been in a lab in Spain. But I was really lucky that I had teachers who were willing to give me remedial lessons during lunch hours to get me there.”

So, why did she choose to study chemistry? “Interest,” Elvira says. “I was fascinated by what chemistry taught. Chemistry gives you so many ways to answer different questions, from organic to materials to analytical chemistry. I also wanted to do something that had breadth.”

It was during her later years as an undergrad that she learned about ‘lab on a chip’ technology. The combination of analytical chemistry methods and engineering technology solutions sparked her interest, and Elvira decided to continue her research career at Imperial and completed her PhD in digital microfluidics for automated chemical reactions. 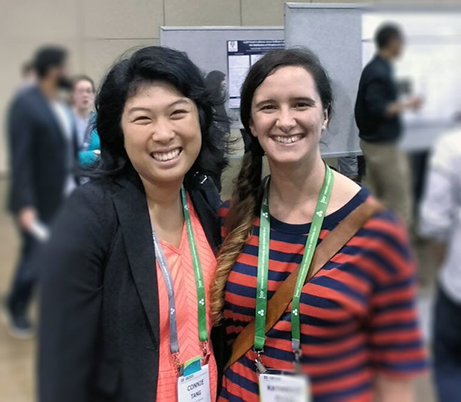 The author and Dr. Elvira at the 100th Canadian Chemistry Conference and Exhibition.

She then moved to the Swiss Federal Institute of Technology in Zurich (ETH Zurich) to complete a post-doc and later worked as a senior scientist in ETH’s Department of Chemistry and Applied Biosciences. While there, Elvira noticed that there were not many women in chemistry and engineering. In response, she co-founded The Society for Women in Natural Sciences Society (WiNS) to build a supportive community for female researchers.

“Starting WiNS was an eye-opening experience for me. In countries that I [am] used to, in the UK or Canada, starting a society like that is so normal. But in Switzerland, the backlash to this society was huge. We had graffiti on our posters, and we received threats and hate mail. It was shocking.”

After experiencing ongoing sexual harassment at work and little help to solve it, Elvira seriously considered leaving academia. The sexist culture was pervasive and damaging, both emotionally and professionally. As Elvira searched for a faculty position, she came up against gender-based discrimination and an unconscious bias against hiring women. At one memorable interview, she was asked whether she was married and had children.

“I was running out of steam. I can really see why women give up, because of the extra effort it takes to get to the same place [as men],” Elvira says. And she isn’t alone. “My husband is also an academic, the same age as me. But you can see the difference of how we get treated at every stage [of our careers], and it’s a huge difference. Now obviously, this is a data set of two, so it’s not representative, but this was my experience.”

When asked to elaborate, Elvira says, “It’s hard to quantify, because you can’t say what might have otherwise happened. I feel like I had to work twice as hard to get to where I am.” When comparing her experience to her husband’s, she notes that, “a huge number of students would question my credibility, even though none of his students have questioned his. That’s a difference. It’s the reputation that almost comes without you trying.”

So, with all of these challenges, how does Elvira stay motivated? “Part of it is my character. I hate it when I’m viewed solely as a female instead of as a scientist or a human being. I had to push for every single thing I got.”

Elvira admits that owning your own accomplishments is challenging, but she says it’s a “learnt behaviour”, and that it was only with the help and encouragement of a supportive colleague (Dr. Robert Wootton, a senior scientist at ETH Zurich) that she learned to recognize, and demand recognition for, her true worth.

Now an Assistant Professor in the Department of Chemistry at UVic and a Canada Research Chair, Elvira hopes to build a research group that studies how microfluidic technology can be used in healthcare and drug discovery. The objective is to use artificial membranes to model and better understand how drugs move throughout the human body.

As Elvira builds her research group, she’s conscious of how important her role as supervisor is for her students. “I remember not having any role models, because I didn’t know any women working in my field. I’m aware of that, and I will continue to participate in science outreach initiatives for young girls.”

In recalling her experiences, she says, “For the most part, I don’t think people [university board, faculty, hiring committees] were nasty. They just didn’t know how to deal with it [sexual harassment and bias]. There was no institutional framework to deal with it. Now, as a faculty [member], I can ensure that university policy works [in dealing with harassment cases]. One thing I can do is to make sure there’s an institutional framework to support students.”

Mostly, Elvira wants to be a good mentor for her students. “I want to inspire people to do something. I don’t necessarily want them to all be professors, but I want my students to feel like they were well-trained to do what they want to do.”

Her best advice? “I think you really need to know yourself as a person in order to succeed. You are you. Figure that out, be happy with who you are, and then be whatever you want. I don’t think self-doubt should be part of your repertoire.”