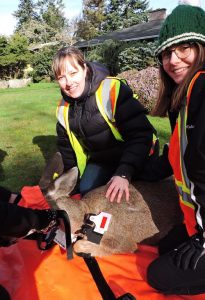 As a science communicator, the prevalence of pseudo-science and fake science on social media led Alina to study the barriers to effective science communication. Her thesis research was nominated for the Governor General’s Gold Medal in research excellence.

Alina is now a Ph.D. student in Environmental Studies at the University of Victoria, where she is looking at changes in wildlife communities in response to climate change and human land use, as well as public attitudes to the value of conservation.